All Collections
The Airnoise Button
Rebooting your rechargeable button

What to do when your rechargeable Airnoise button won't respond

Written by Chris McCann
Updated over a week ago

As with most complex devices, sometimes things just get a little wonky with the rechargeable Airnoise button. If your button isn't responding to button clicks or presses, or doesn't seem to be connecting to your phone during setup or to your WiFi, follow these steps to reboot it.

NOTE: This process requires you to open the button's plastic case to remove and reinstall the battery. Use caution when opening it to be sure you don't damage it or hurt yourself.

The first step is to open the button's case. You can do this using the blue plastic "guitar pick" tool that came with the button or by using a dull metal butter knife. Definitely don't use something sharp or pokey -- it's too easy to damage the button or, even worse, stab yourself. Airport noise complaints aren't a blood sport, so take it slow and easy when opening the case.

IMPORTANT! DO NOT insert whatever tool you use to open the case into the charging port. It is delicate, and if you damage it to the point the charging cable can't be inserted, you will brick the button and render it unusable. Don't do this! 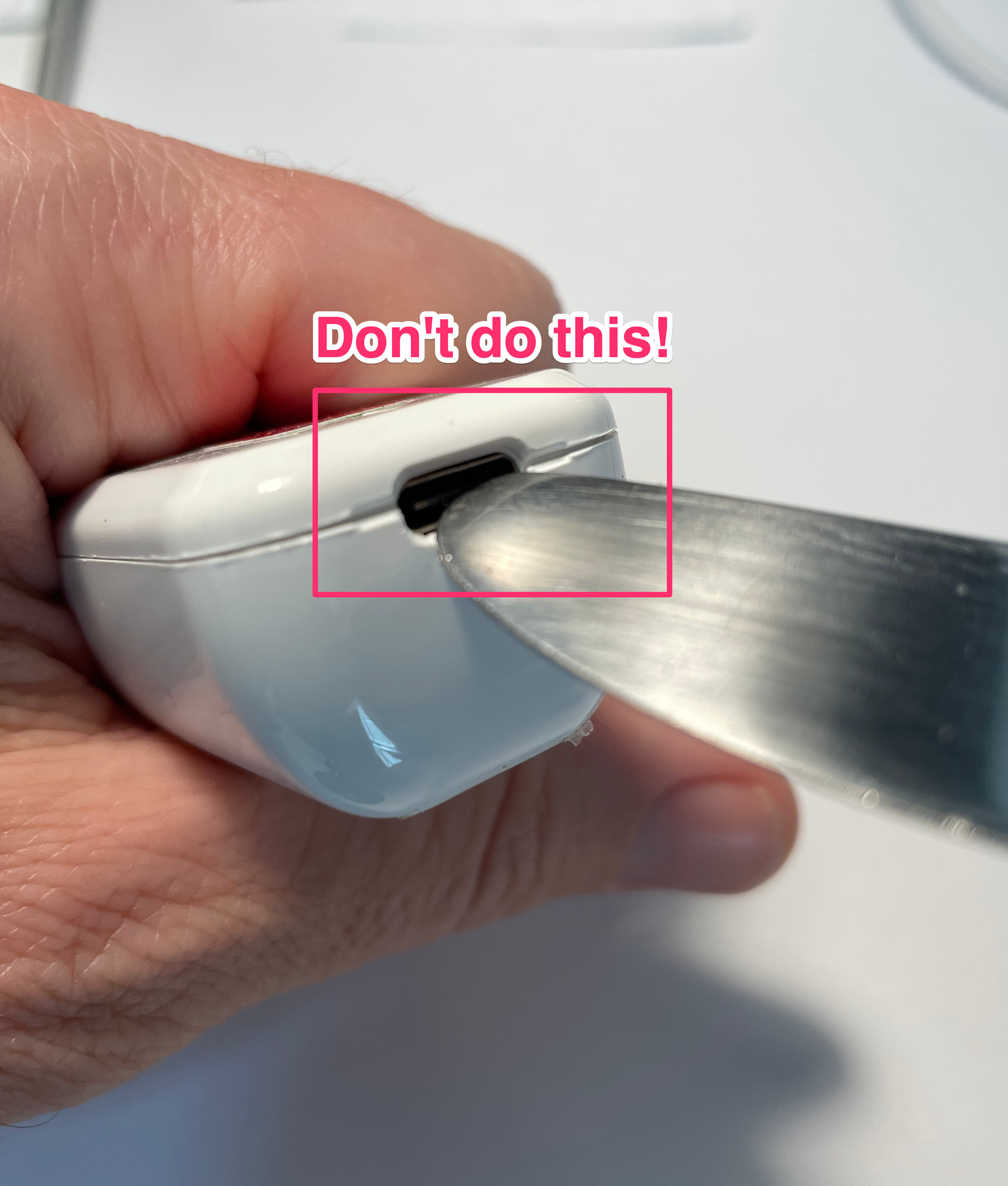 (No buttons were injured in the making of this photo. I'm a trained professional.)

Slide the tool along the seam between the halves of the case while pushing it into the gap, then twist it to separate them. You may find that the case of your button is snapped together pretty tightly and that the tool's plastic is too soft to really open it. If that's the case, consider using a butter knife as described next. 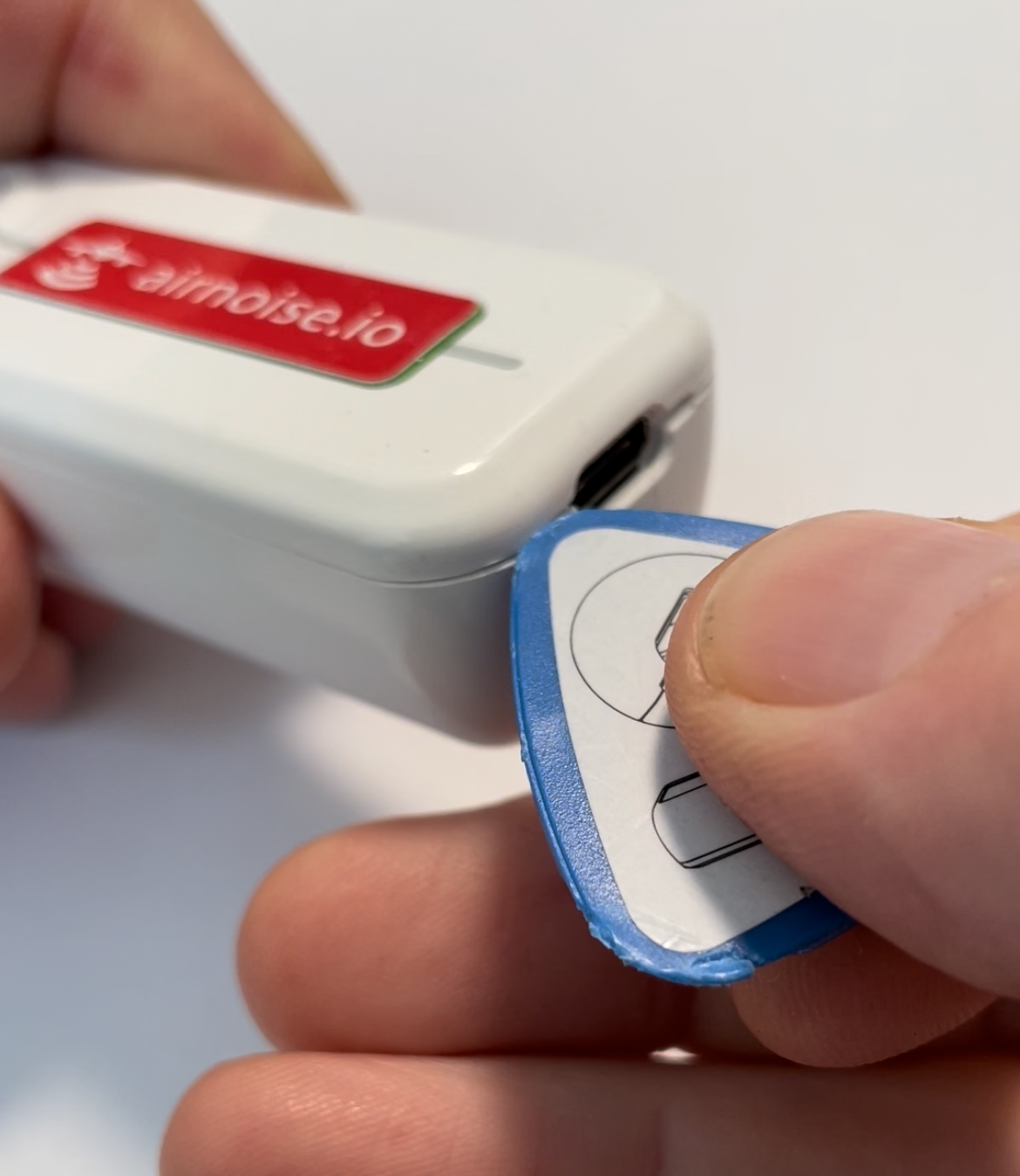 You can also use a dull metal butter knife to open the case. Be exceptionally careful not to jam it into the charging port. Sorry to be repetitive about this point but it's the quickest way to do permanent damage to the button and turn it into a paperweight. 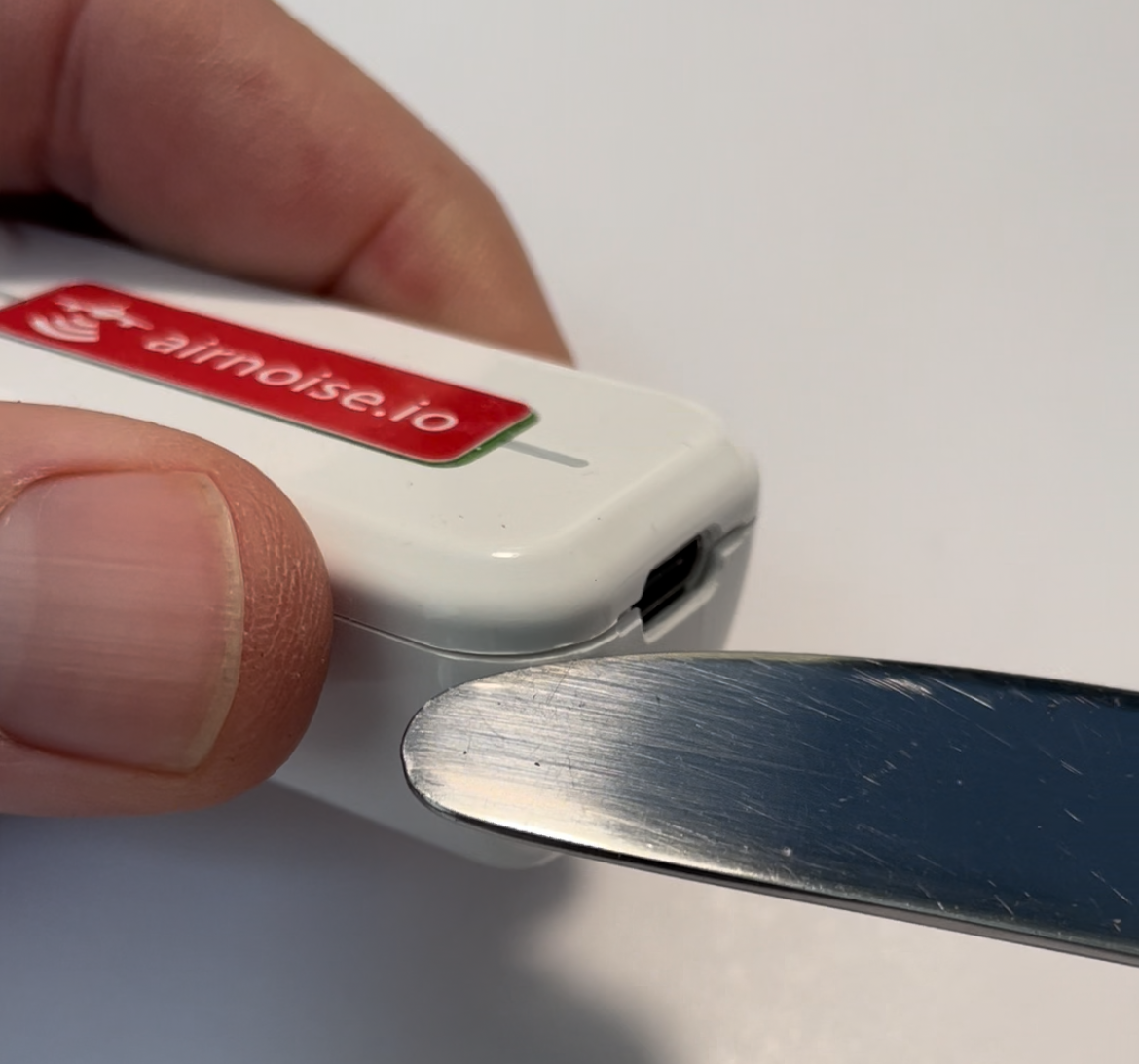 Slide the edge of the blade into the seam between the halves of the case and gently twist the knife to separate them. The case should snap open with a gentle "pop". 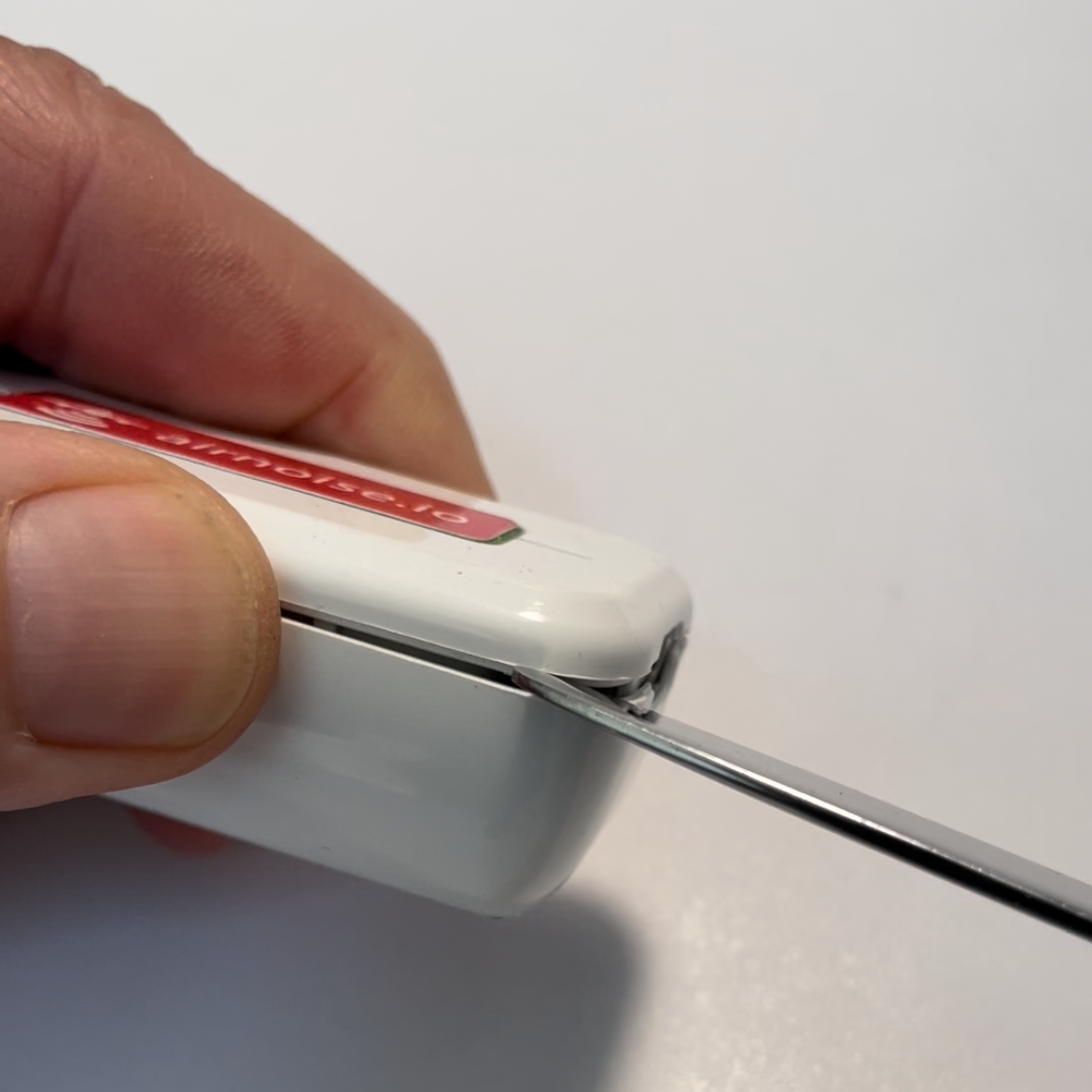 NOTE: There is a notch in the bottom half of the button's case that fits around the charging port. Take note of that and be sure you orient the case the right way when you snap it back together later, otherwise the charger won't fit into the port. If you do make this mistake, just follow these instructions to pop the case open again and swap it around.

The battery is held pretty firmly by the metal clips on each end so you'll need to use a tool like a butter knife to gently pry it up and out of the holder. Insert the tip of the knife under the battery from the side and gently pry it up to pop it out, as shown below. 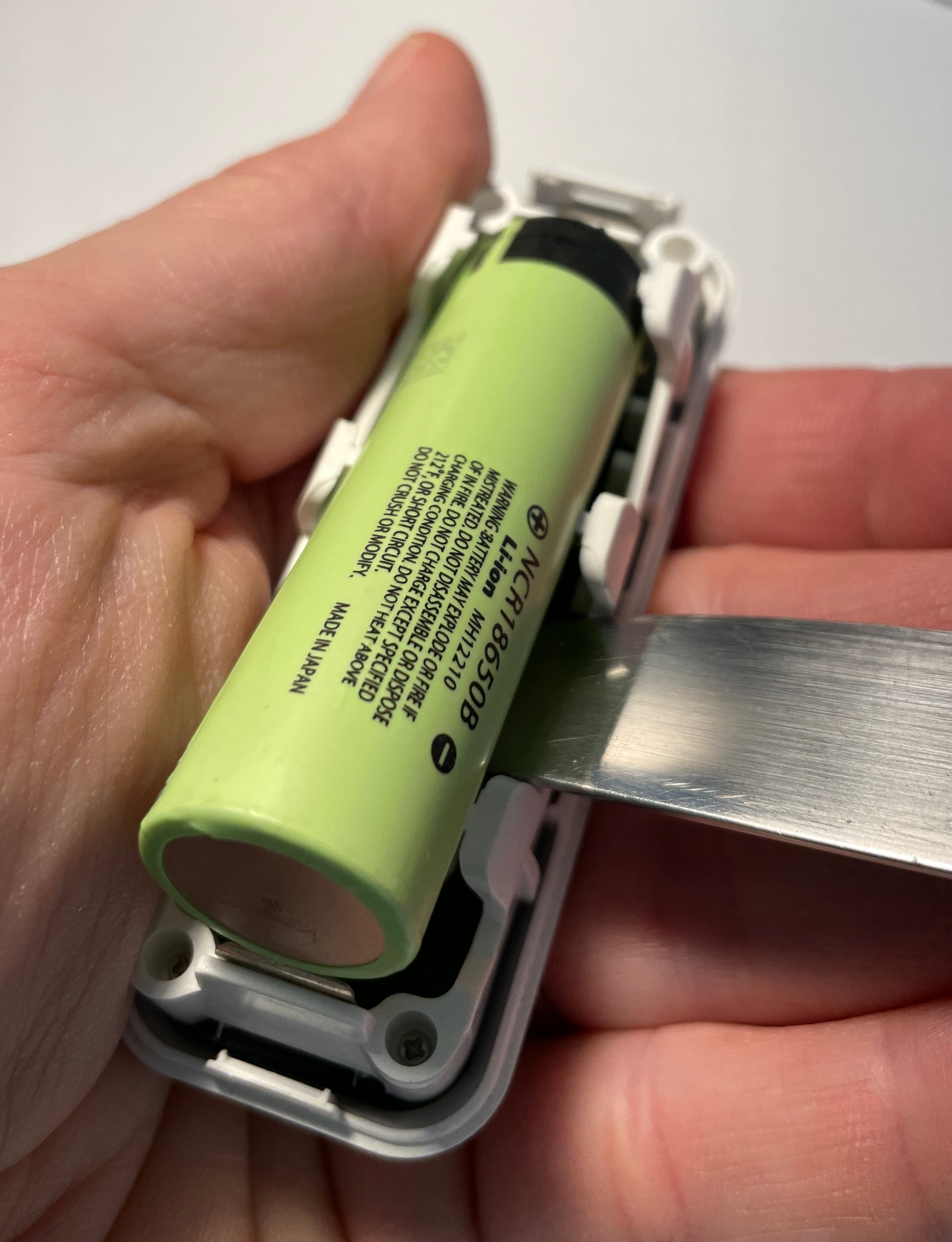 Once you've removed the battery, wait at least 15 seconds before reinstalling it. This gives the device enough time to reset its firmware. Put the battery back into the holder being sure to match the end with the black markings with the + symbol on the circuit board.

It's easiest to insert the opposite (negative, - ) end into the holder first then push the positive end down to seat it in the holder. 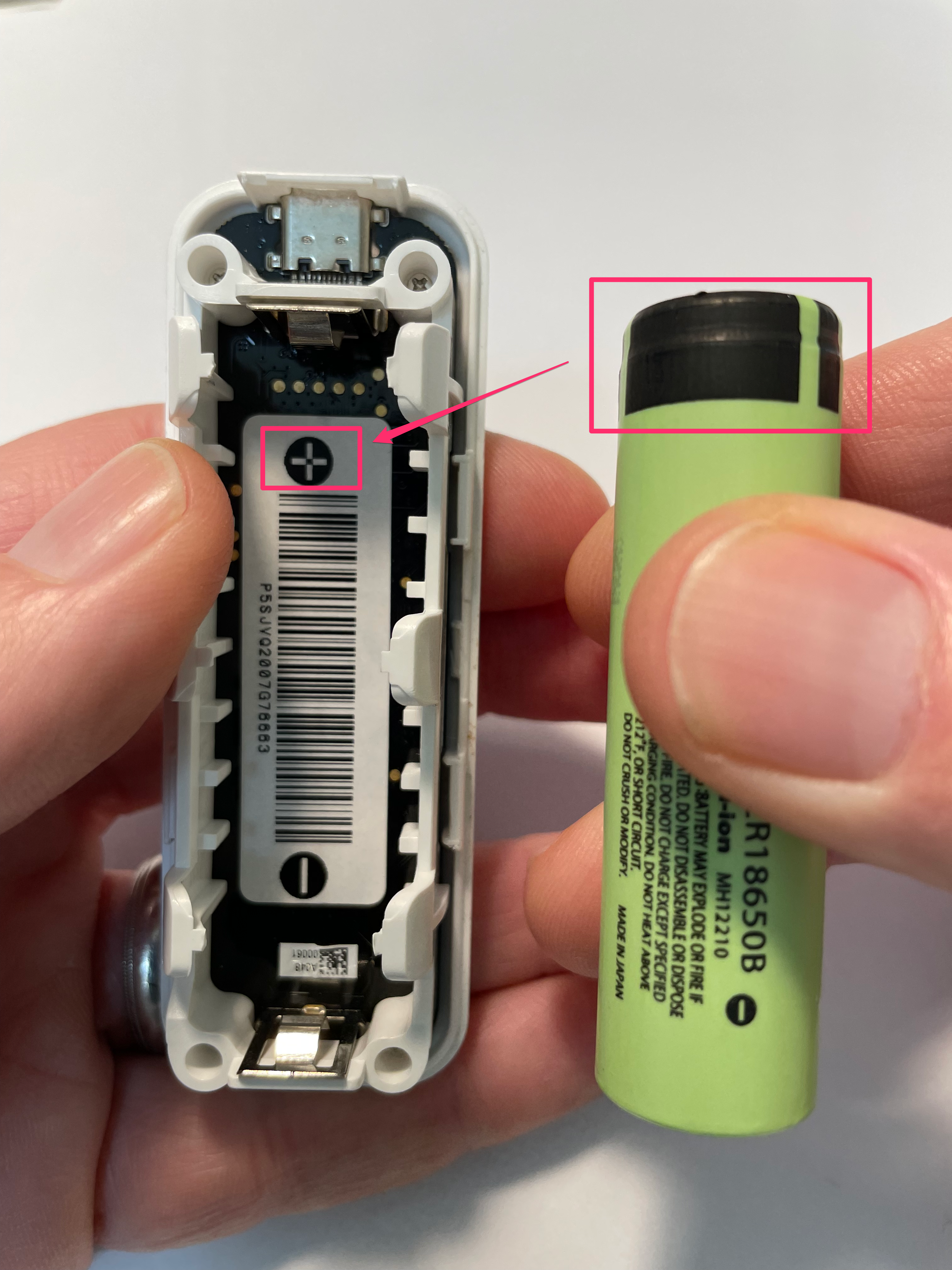 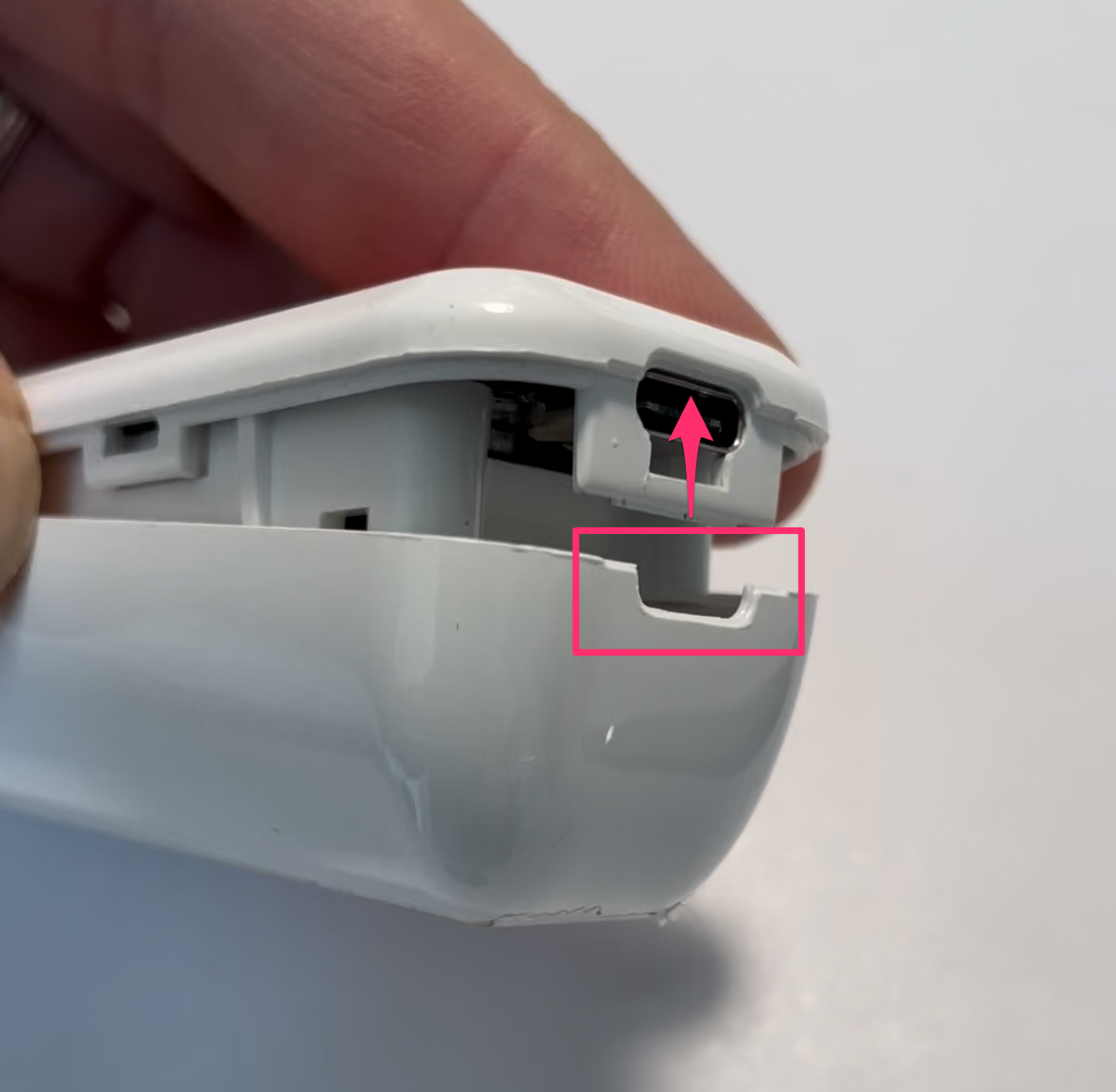 If you mix this up you won't be able to fit the charger into the port, so save yourself the extra steps fixing it and be sure to align it right on the first go!

Whenever the battery is removed from the button, or if the battery completely discharges, you need to reactivate the electronics in the button by plugging it into the charger cable while plugged into power.

We recommend plugging it in, unplugging it, then plugging it in again and leaving it for a few seconds to verify the green "charging" light illuminates. 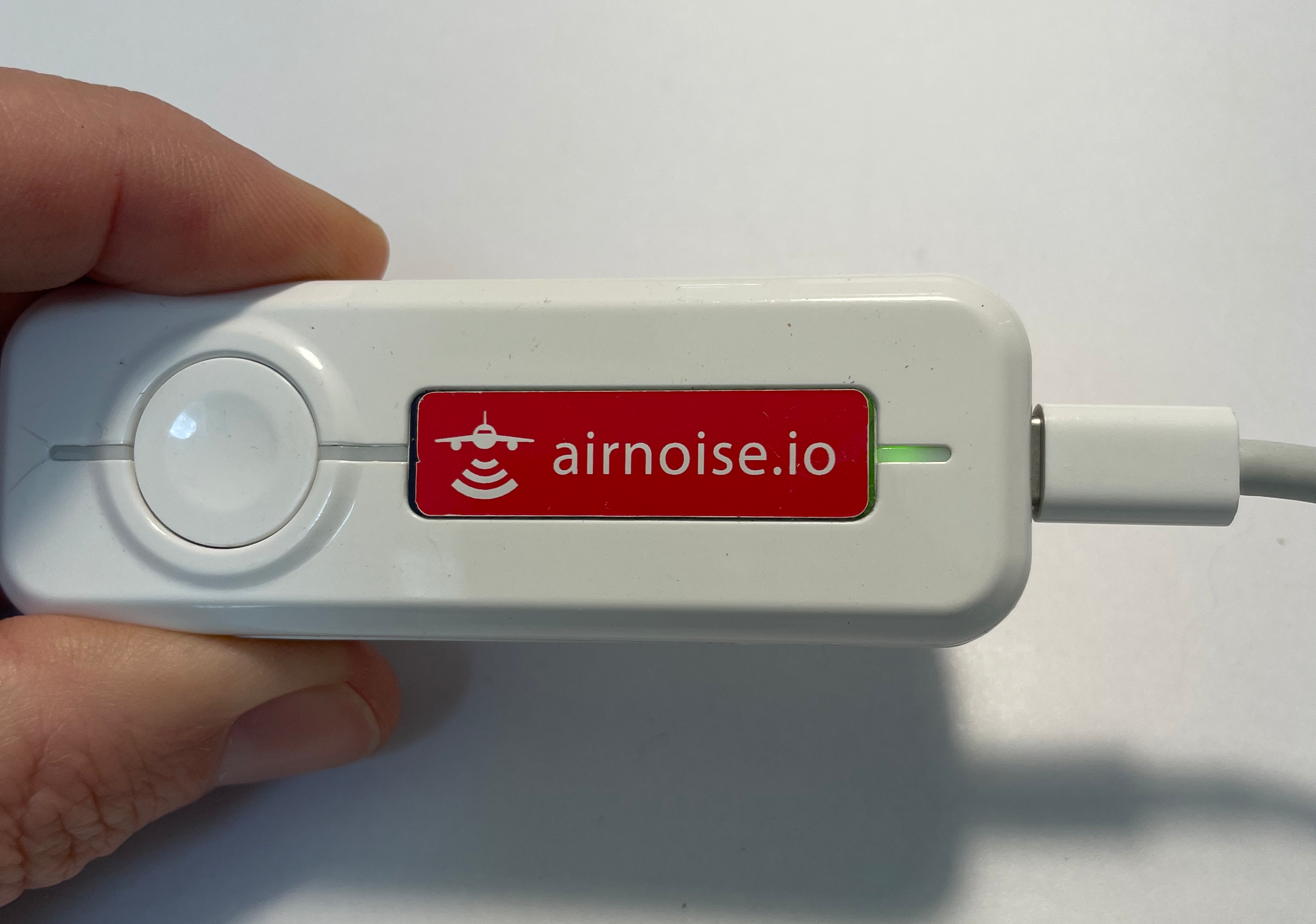 If your battery is 100% charged, the charging light may flash very briefly the first time you plug it in, so briefly that you might not see it, but will normally stay lit the second time, which is why we suggest you do the plug/unplug/plug hokey pokey.

If the light doesn't stay on because the battery is fully charged, don't worry, just ensure that the charging cable is actually plugged into power so your button is reactivated.

If you've made it this far, congratulations! The whole point of this exercise was to try to get your balky button working again. Once you've followed the reactivation steps above you can test it by giving the button a 2-3 second press and then releasing it. This won't file a complaint, it will just generate a test message from Airnoise to your email address.

If all goes well, the light at the end of the button should flash white then go solid green. If your button wasn't responding at all and you now see this, you're good to go.

It's still not working!

Dang it, we're sorry about that. Are you sure your battery is charged, or that you're plugged into the charger? If you are sure the button has some juice but it's still refusing to behave, contact us via the support chat system and we'll get a free replacement headed your way lickety-split.

Sorry for the hassle -- sometimes technology just fails us and some of these buttons have been a bit, shall we say, "lemony." We'll make it right, right away, so please contact us if your rechargeable button seems to have gone the way of the dodo (that is, extinct and lifeless). Thanks for your patience!