All Collections
News @ AllThingsTalk
How does Humidity and Temperature ratio relate to your health?

How does Humidity and Temperature ratio relate to your health?

Written by Davor Predavec
Updated over a week ago

"The Earth’s atmosphere plays host to numerous weather phenomena that affect life and shape the planet. Understanding these phenomena requires knowledge of the interaction between temperature and humidity. Temperature affects humidity, which in turn affects the potential for precipitation. The interaction of temperature and humidity also directly affects the health and well-being of humans. Relative humidity and dew point, values commonly used by meteorologists, give the means to understand this interaction" [1]. Effects on human health and comfort

Temperature and humidity affect people’s comfort levels as well as their health. High humidity and heat means more water in the air, which can carry odour molecules further, leading to considerable stench in summer around bacteria sources such as garbage. Recent studies reveal connections between humidity, temperature and public health. Temperature and humidity directly influence influenza virus transmission in temperate regions of the world. Influenza activity increases in winter in each hemisphere's temperate zones. Flu virus thrives when outdoor temperatures grow colder. While winter relative humidity is higher in winter, indoor relative humidity is much drier due to heating. The exposure to cold outside air and dry inside air increases flu virus transmission. Research indicates aerosolized influenza virus is more stable at lower relative humidity. The half-life of the virus drops at higher temperatures and cannot be spread as easily [3]. 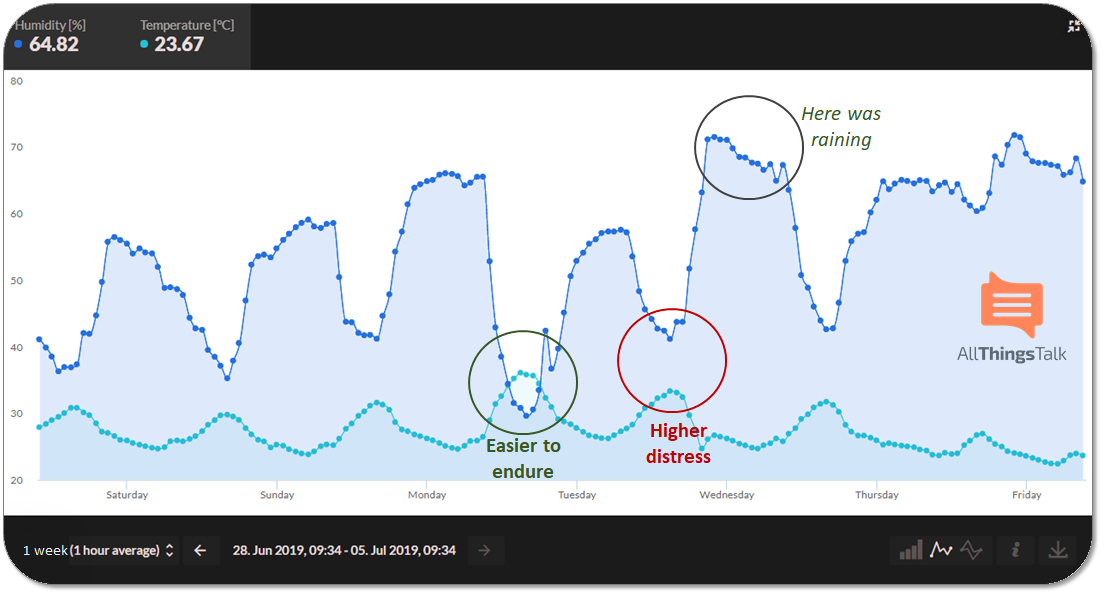 Tricky relationship to be aware of

Although we've used scientific articles to help you understand how the humidity and temperature affects your well-being, you should keep in mind one important information: There is no unique relationship between temperature and humidity. However humidity can change a person’s comfort at the same temperature as humans are sensitive to the water vapor content in the atmosphere.

I'll give you an example [4]: If the air temperature is 24 °C (75 °F) and the relative humidity is zero percent, then the air temperature feels like 21 °C (69 °F). If the relative humidity is 100 percent at the same air temperature, then it feels like 27 °C (80 °F). In other words, if the air is 24 °C (75 °F) and contains saturated water vapour, then the human body cools itself at the same rate as it would if it were 27 °C (80 °F) and dry. Simply said, human body experiences greater distress of waste heat burden at high humidity than at lower humidity, given equal temperatures.

In cold climates, the outdoors temperature causes lower capacity for water vapor to flow about. Thus although it may be snowing and at high humidity relative to its temperature outdoors, once that air comes into a building and heats up, its new relative humidity is very low, making the air very dry, which causes discomfort.