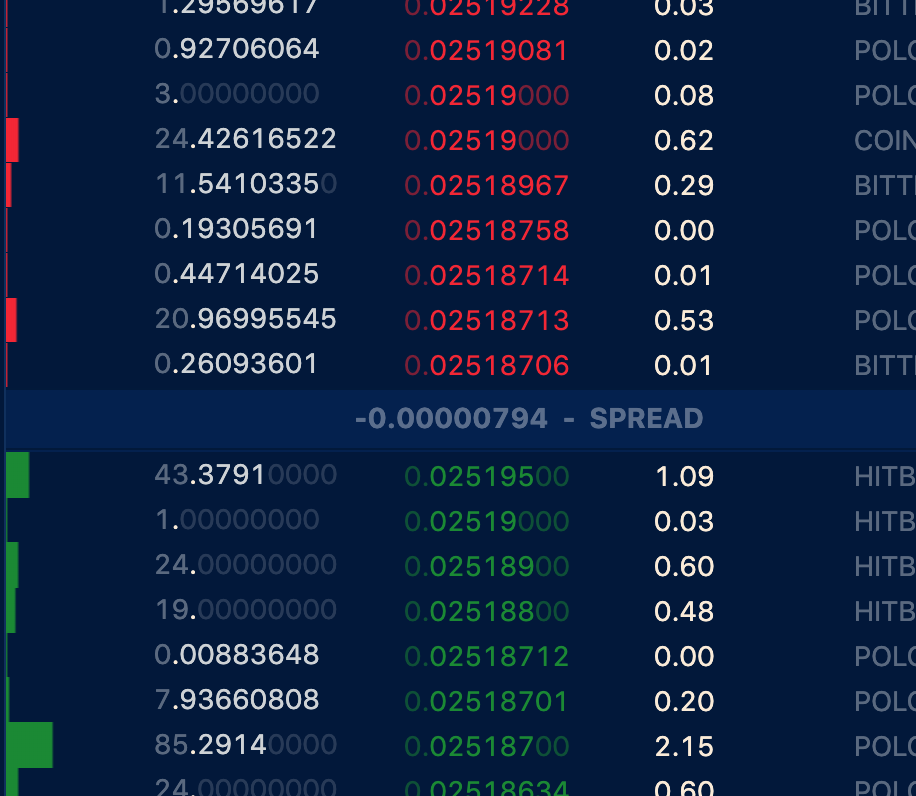 If a market has a lower (‘tighter’) spread, it usually means that the underlying asset is more liquid, since there is more ‘competition’ from buyers and sellers to buy at a higher price than others or to sell at a lower price than others, respectively. Liquidity is often sought by traders as it is an indicator that their trades will be executed quickly at the prices they want.

Therefore, the ‘tightest spreads across Digital Asset markets’ analytic on the APEX:E3 platform gives the user an indication of which markets currently have the best liquidity.

Since APEX:E3 collects orderbook data from markets across multiple exchanges, the A.L.I.C.E system is able to calculate the theoretical spread between multiple exchanges. For example, imagine the lowest BTC/USDT offer on Kraken is 9580 and the highest bid on Coinbase is 9500. The theoretical (since these are two separate markets) spread would then be calculated as:

If one attempted to place an offer at a price below the highest bid, the trade would be executed at the highest bid price. Because of this, there can never be a spread of less than zero on any one market. However, this is not the case when aggregating orderbooks from multiple exchanges, as in the example above. Therefore, one may come across examples where the lowest offer on one exchange is lower than the highest bid on another.

Extending the above example, imagine the lowest BTC/USDT offer on Kraken is 9500 and the highest bid on Coinbase is 9580. The theoretical spread would then be calculated as:

This presents what is called an ‘arbitrage’ opportunity, where one could theoretically buy BTC on Kraken for 9500 and sell it on Coinbase for 9580, producing a risk-free ROE of 0.84%.

The APEX:E3 platform picks out the top arbitrage opportunities from across the markets and presents them on the premium analytics page.