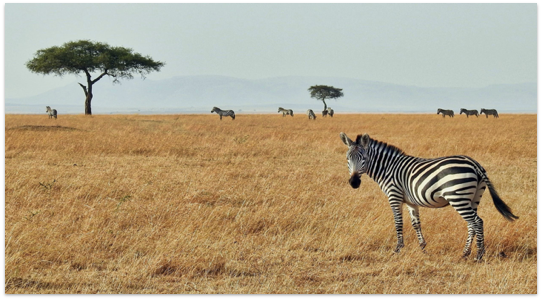 “Africa will define the future (especially the bitcoin one!)” Jack Dorsey Founder, Twitter

Jack Dorsey, Twitter founder and keen advocate of bitcoin, has recently completed a tour of northern Africa, including Nigeria and Uganda, announcing he will return again in 2020. According to coinmap.org, which maps occurrences of places around the world where Bitcoin can be used and spent, Africa is the continent with the least ‘heat’ on the map. Several countries within Africa, including Morocco, Algeria, Zambia & Namibia have outright banned cryptos altogether. So was Jack Dorsey mistaken when he claimed Africa ‘will determine the future of Bitcoin’?

Firstly, it is important to look at the potential market in Africa for cryptocurrencies in general. Whilst early adopters of new technology tend to live in richer countries, usage of tech such as bitcoin can also come from necessity. As an example, take Nigeria and its capital city, Lagos. The city’s population is predicted to grow to 32 million by the year 2050, becoming the most populous in the world by 2100. As recently as 2016, the Nigerian Government increased the cost of sending and receiving money from other countries, going as far as to revoke the trading licenses of all but 3 money transfer firms. Even Paypal itself does not allow payments from or to Nigerian accounts. This may go some way in explaining why, according to Google analytics, Nigeria was top of the list for searches of ‘bitcoin’ over the last 12 months.

This trend is not exclusive to Nigeria, however, with places such as South Africa seeing cryptocurrency ownership as high as 10%.

Further to strict money transfer laws and fees, another problem that plagues members of African countries, especially Northern states, is limited access to retail banks. Currently, 2 in 3 Sub-Saharans are unbanked. However, with the growing number of people with access to smartphones with apps such as the Opera web browser, which includes features such as a crypto wallet, the financially excluded can stand to benefit from the new technologies being developed. In fact, the peer-to-peer crypto trading platform Paxful reported that 45% of their 3 million users are based in Africa, with a 65% increase in trade volume from the continent from 2018.

Whilst there is a point to be made about bitcoin as an intrinsic asset of value in itself for members of African countries, as best demonstrated by the premium that bitcoin trades for in Zimbabwe, which is suffering from problems of extreme inflation, choosing cryptocurrencies as a hedge against volatility is not the main driving force we are discussing here.

As a final note, the implementation of cryptocurrencies in Africa may expand past simply owning and trading bitcoin. As the population of Africa continues to grow, the continent should be keen to position itself as a leading player in implementation and use of crypto and blockchain technology. Uganda and Sierra Leone are already using blockchain technology for infrastructure such as ID systems and pharmaceuticals. 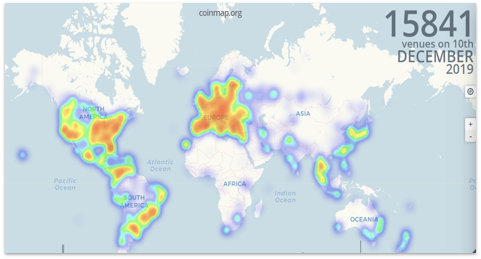 The heatmap above, provided by coinmap.org, shows the occurrences of places where bitcoin can be used and bought in real life places, showing very little activity in Africa.

The heatmap below shows the search activity for ‘bitcoin’ over the past 12 months. The difference in activity in Africa can be seen most obviously in Nigeria. The comparison of these two maps perhaps gives some indication of the bitcoin availability and demand on the continent. 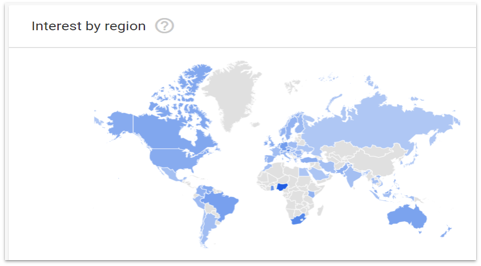 Join us on Discord at http://discord.gg/cMdMBem and Telegram at http://t.me/APEXE3HQ