There are several elements of Cerebro with lists of users and groups, such as: task performers, statistics on users, in the admin panel, etc. Also data about users is present in the forums and in the properties of tasks. In these elements only users who can see the user who opened a particular interface are displayed.There are several interface elements in Cerebro which display users and user groups, such as: assigned users, user statistics, Administrator Panel, etc. This data is also present in forums and task properties. In all those elements user can only see other users if they are visible to him.

User visibility is initially configured when a new user is created, and you can change it on the Who sees who tab in the Administrator Panel. 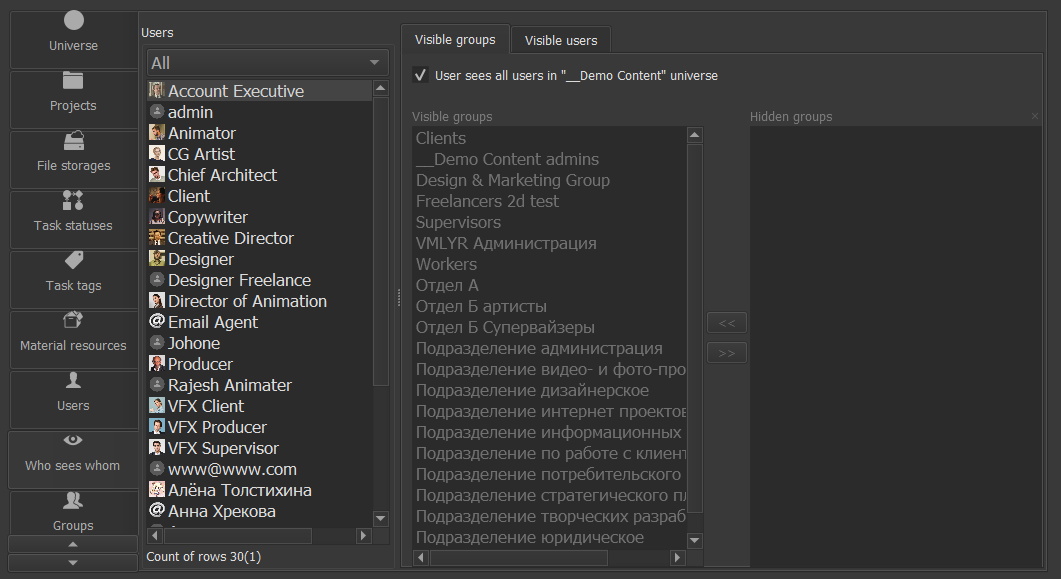 For simplified visibility configuration you can use User sees all users in current universe flag. In the user wizard (the New standard user and New e-mail user commands in Tools menu) the option is located on the first step, and is enabled by default.

Enabling this feature means that the selected person will see all the users of the universe. When it is disabled, visibility of other users is defined using lists on Who sees who tab.

After you’re done with initial visibility permissions setup, you can adjust it by adding or removing users from appropriate groups. When user is added to a group he becomes visible to everyone who is able to see this group, and vice versa

On the rightside of window there are two tabs which are used to configure visibility for groups and individual users.

On the tab there are two lists: the visible and hidden groups. Using “<<” and “>>” buttons you can move required elements to the “Visible groups” list.

If the Sees all users of the universe flag is turned on, the interface to add/remove visible groups is disabled.

The user does not have to be assigned to a group that he is able to see, and on the contrary, a member of the group may not see it, if visibility is disabled for him.

The tab is used for information purposes only. It displays the list of users who are visible for selected user according to all visibility settings.