All Collections
Press / News
Do cryptocurrencies have a role to play in property?

Do cryptocurrencies have a role to play in property?

Few people had heard of Bitcoin five years ago. Fewer still realised it was only the first of several cryptocurrencies that would emerge and hardly anyone thought this ‘digital money’ would ever be taken seriously as a mainstream currency. So Michael Dean, principal at Avamore Capital, made what he thought was a safe wager. “I had a bet with someone that nobody would be using Bitcoin by the 2020s,” he says.

It looks as though he is about to lose that bet. In the past five years, cryptocurrencies have reached a tipping point. Bitcoin has been joined by currencies such as Ether, Dash and Ripple and many of them not only have transactional value but can also be used in so-called ‘smart contracts’ - computer protocols intended to facilitate, verify or enforce the negotiation or performance of a contract.

These cryptocurrencies have also helped start-ups raise money through initial coin offerings (ICOs). Forbes estimates that since ICOs were introduced a few years ago start-ups have raised $2.3bn (£1.7bn) using this funding model.

Soon, it will even be possible to buy property with these new currencies. Last month, British entrepreneur Michelle Mone announced that the apartments built in a new multi-million-pound Dubai development by her company would be listed for sale in Bitcoin.

“I think I’m going to be on the wrong side of that bet,” admits Dean.

So what does the industry need to know about cryptocurrencies and should people start making preparations for their mainstream use?

Blockchain is a digital ledger. It records transactions that happen on its software as a ‘block’, and those blocks are coded onto the ‘chain’. That chain is verified and set in ‘unhackable’ digital stone by ‘volunteers’ who are usually paid using cryptocurrencies - this verification process is called ‘mining’. 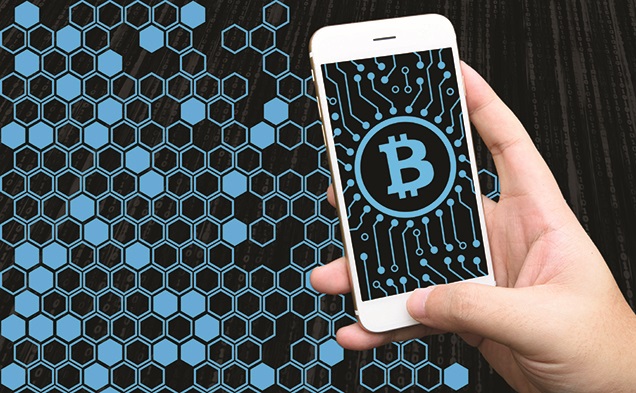 Blockchain records transactions that happen on its software as a ‘block’ - Source: Shutterstock/Zapp2Photo

The process is restricted by complex rules written into the code of the blockchain software.

Think of it like a Google Doc - certain people are given access to a ‘thing’ (data, money, contracts etc) and each time a change is made, a record is kept of what that change was, who made it and when. That record exists for all invited parties to see, but it cannot be changed - only added to.

Cryptocurrencies are simply a means of payment that sit on blockchain software. They are digital rather than physical entities, but otherwise act in every way like traditional currency.

Blockchain: the new phenomenon set to transform the way we work

Bitcoin is still the most famous cyptocurrency. It was supposedly created in 2008 by a Japanese programmer under the name Satoshi Nakamoto (although the actual identity of the creator has never been confirmed). New coins are ‘mined’ every 10 minutes, and there are currently estimated to be around 16 million Bitcoins in circulation. Miners can sell, swap, make purchases with or distribute Bitcoins as they please, but only a maximum of 21 million Bitcoins can be mined.

Other cryptocurrencies such as Ether and Ripple have a similar operational model, but whereas Bitcoin is simply a financial transaction, Ether is built on the Ethereum blockchain, which also enables smart contracts, including documents and data, to be exchanged.

There are estimated to be around 800 cryptocurrencies currently available and members of the property industry would be wise to familiarise themselves with them, says Saurabh Saxena, founder of online landlords’ platform Houzen.

“There are several benefits including real-time transaction processing/settlements; reduced transaction costs; being able to trade in fractional denominations; identity information control, as users can share as much about themselves as they wish; and widespread accessibility because anyone with a device and internet is able to trade,” he explains.

Neil Singer, chief executive of clicktopurchase, an online platform for property sales which recently released its own property blockchain, adds that ease, speed and certainty are more reasons to invest.

“I have transferred Bitcoins to a recipient in South Africa, 6,000 miles away, in seconds,” he says. “This compares with two to three days using the banking system.

Neil Singer of clicktopurchase says Bitcoin is as simple to use as a credit card - Source: Shutterstock/rangizzz

Cryptocurrencies are not without risks and challenges, however.

One of the problems is the volatility of their value. “The underlying risk is extremely high as the currency value fluctuates constantly throughout the day and the spread can be quite large,” says Saxena.

It’s simple to use - no more difficult than using a credit card - Neil Singer, clicktopurchase

Dean adds that the dollar value of Bitcoin was halving and doubling on a daily basis only a few years ago. As Property Weekwent to press, it was at a record high, but no one thinks it will stay at that level. That unreliability of value will be a hallmark of all cryptocurrencies for a while, believes a senior figure at one of the UK’s leading blockchain companies.

“The volatility exists in all cryptocurrency markets,” the expert explains. “[They are] all going through teething issues. We have stayed well away from them.”

In the long term, he sees the value fluctuations calming, but he says Bitcoin will never be the Visa card replacement it seeks to be. Rather, it is more likely to be a safe way to store money - something more akin to gold.

And, he warns, the sector is awash with Ponzi-style schemes. “A lot of [the cryptocurrencies] are a load of nonsense,” he says.

This is where ICOs come in: in return for cash funding, investors get ‘tokens’. For a blockchain company that might be coins in the cryptocurrency that will be accepted on its platform, but for others it may be tokens that can be recouped for services. Either way, they are not payable until the company is established, so although billions have been raised by businesses using ICOs, Dean remains sceptical.

Frankly, all they amount to is a bit of a con trick to lure in desperate punters - Michael Dean, Avamore Capital

“Frankly, all they amount to is a bit of a con trick to lure desperate punters looking to speculate on digital currencies, which may never be adopted at any level of scale and will have an exchange value that is barely a fraction of the ICO value after a few months.

“I think it will be hard enough for vendors to accept even one digital currency (which will probably be Bitcoin) in the immediate future, let alone multiple cryptocurrencies.”

Investors should brace themselves

The Financial Conduct Authority (FCA) has already warned investors in ICOs that they should brace themselves for the possibility of total loss (most ICOs are not regulated by the FCA). In China, ICOs have been banned and Bitcoin exchanges have been ordered to close.

This is just the cusp of what many believe will be a wider regulatory clampdown on cryptocurrencies, which could severely hamper their take-up.

Nir Kshetri, professor at the Bryan School of Business and Economics at the University of North Carolina at Greensboro, who has extensively researched cryptocurrencies, says: “Most crypto-entrepreneurs may face serious challenges in dealing with various regulatory and enforcement issues arising against the background of governments’ concerns about potential terrorist financing and investor protection.”

The UK-based blockchain expert agrees that regulations are a problem, but he does not believe the issue is insurmountable.

“Legislation and regulation are a massive headache,” he concedes. “This is tricky: when was a new asset class last released? It is the biggest challenge facing the technology and associated currencies but it will be eventually overcome.

“The practical and financial gain to be realised by companies small and large all over the world will be too vast to ignore. We have not come this far for the brakes to be suddenly put on.” 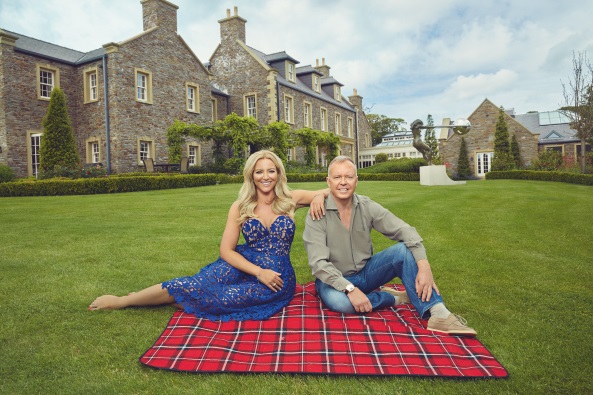 However, Saxena is still not convinced. He worries about the potential for fraud due to the untraceability of the transactions and he is not certain the systems are as safe as has been claimed. “Unlike what most engineers will tell you, hacks are possible and the system will need to pass the test of time to become watertight,” he argues.

Indeed, it was widely reported in July that a South Korean cryptocurrency exchange had been hacked.

Nevertheless, cryptocurrencies are likely to be the most secure way of making transactions, says Saxena.

It appears that others are coming to the same conclusion because cryptocurrencies are now increasingly being traded in more mainstream ways.

“At the moment, I suppose Bitcoins are relatively illiquid in that one can’t go to Waitrose and buy with a Bitcoin. However, this is changing fast - there are already coffee shops in London where you can go and buy with Bitcoins,” says Singer.

The number of operators that accept Bitcoin is indeed on the rise, with huge companies such as Expedia offering Bitcoin as an option. And as the blockchain expert says, we have to realise this is a technology still in its infancy. All new tech has teething problems.

So will property get in on the act and if so, how?

The blockchain expert says he is working on a major property angle for cryptocurrencies and although he won’t be drawn on the details, he says any move into real estate would involve a platform such as Ethereum which combines currency with smart contracts.

Kshetri, on the other hand, thinks property is a long way from using cryptocurrencies.

“Compared with highly digitised industries such as telecommunications and music, the real estate sector may face more challenges due to its low degree of digitisation,” he says. “Real estate title registration on blockchain is at a relatively nascent stage. In some countries such as Honduras, the plans to record land titles on blockchain have stalled.”

The real estate sector may face more challenges due to its low degree of digitisation - Nir Kshetri, Bryan School

Rupert Lee-Browne, chief executive of fintech company Caxton FX, agrees. He thinks it will be some time before properties are bought and sold using cryptocurrencies.

“Bitcoin, Ethereum and the other cryptocurrencies emerging are not yet fit for purpose when it comes to property transactions - they are volatile, unregulated, insecure and are not universally accepted, not the kind of things

you want when you are exchanging significant amounts of money for land, bricks and mortar,” he explains. “Ultimately, a market will only emerge when these issues are ironed out and additionally, regulators are comfortable with recording transactions with values in non-fiat currencies.

“The recent handful of properties being marketed in London and Dubai in exchange for Bitcoin shouldn’t be considered a viable trend - these will be marketing gimmicks - and might be successful in that particular aim. However, they are highly unlikely to be the first of a new wave of large numbers of Bitcoin property sellers,” he adds. 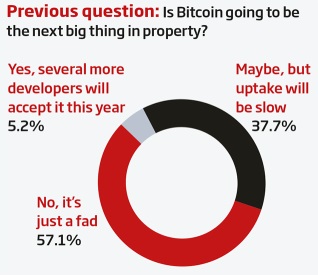 A recent Property Week poll suggests those in the sector agree: 58% believe cryptocurrencies are a fad and just 5% believe other developers will sign on to accept Bitcoin this year.

Yet the blockchain expert says we are judging this tech as if it is the finished article. Yes, currently, the technology is not quite there but give it time, and he says we will wonder why we ever resisted.

“The first mobile phones were a rucksack on your back. The cryptocurrency equivalent of the smartphone may not exist yet - the person who develops it might not even know they are going to come up with it,” he says.

However, he adds: “I would be very wary of anyone who claims they know for certain how this is all going to develop.”

It may not be this year, it may not be in the next five years, but at some time in the future it looks likely that digital money will be widely used in the property industry.