Welcome to the clicktopurchase® Blockchain at The South Africa Property Exchange

Blockchain is a database. Significantly it is one which is immutable, tamper proof. This is achieved by data inputs being "hashed" and moved together into "Blocks" of data, with a subsequent Block incorporating new data inputs along with the input from the previous Block. As a result, each Block is dependent upon a previous Block, hence a “Block-Chain”.

Data is “hashed”, which means it is converted into a representation, a code, of a given length which will appear meaningless. However, the smallest change to any data input will change the output hash completely. Since each Block contains hashed data, changing any input within the chain will change every subsequent output which means tampering is impossible.

The second key point is that copies of this Blockchain are held on multiple servers. So, it is a "decentralised" database. It is not held on one machine. Since it is decentralised, changing a record on one server will no longer match the others. One would need to change all the servers’ data at the same time.

So, combine the Chain of Blocks, with this decentralised system and you have a way to hold data in a way which is tamper proof and 100% reliable.

clicktopurchase® uses hash and encryption technology as part of the creation of the transactional audit trail; this is than recorded in the clicktopurchase® Blockchain ledger.

Since all events are now held in the Blockchain ledger, absolute proof of actions are recorded in a tamper-proof manner.

For example, if you have exchanged contracts with clicktopurchase®, you have undeniable proof that you have entered into a purchase contract. A layer of security, transparency and accountability is provided which is unavailable elsewhere.

Finding your way around the clicktopurchase® Blockchain

The Blockchain records all transactions at clicktopurchase® 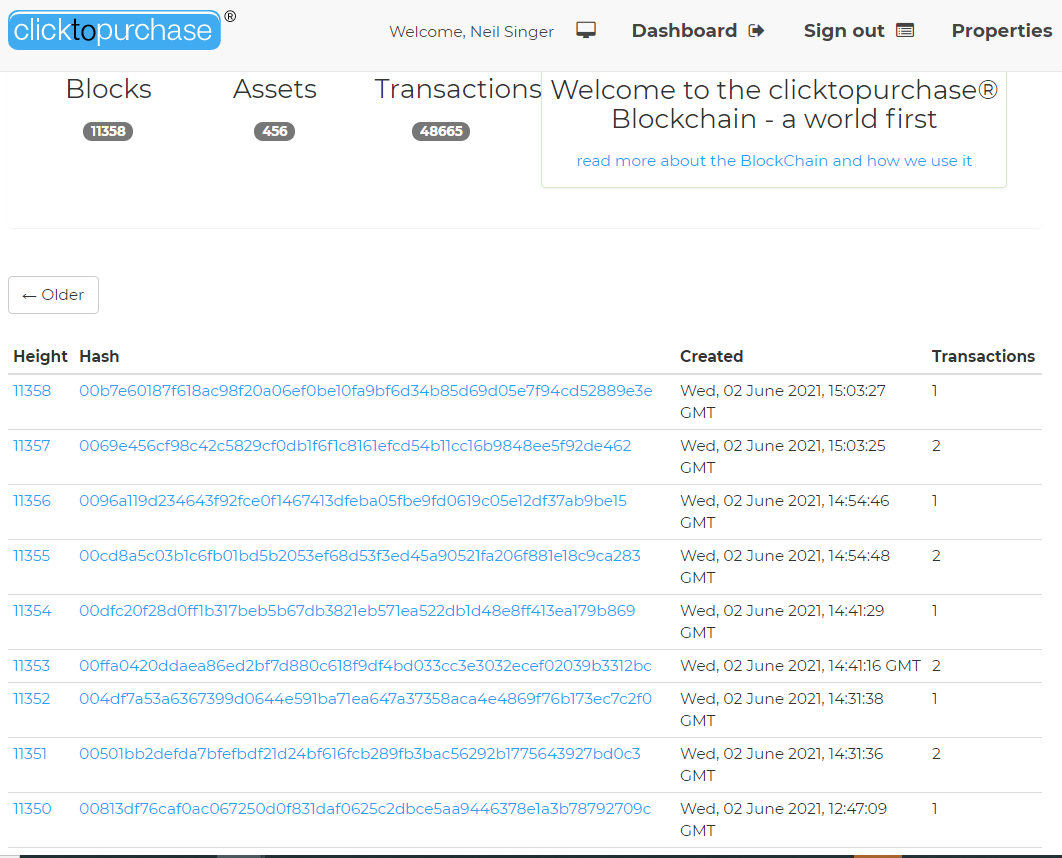 Each Block contains the “transactions” recorded within the ledger. A “transaction” can be any action undertaken during the course of a clicktopurchase® sale. Hence, a registration, verification, power of attorney upload, Agreement of Sale upload, submission of an offer, acceptance of an offer and contract exchange.

Here is an example of the ledger displaying the record that a property contract has been exchanged.

Here is an example of a list of transactions for a user. Note the Wallet Address with each action within the audit trail. 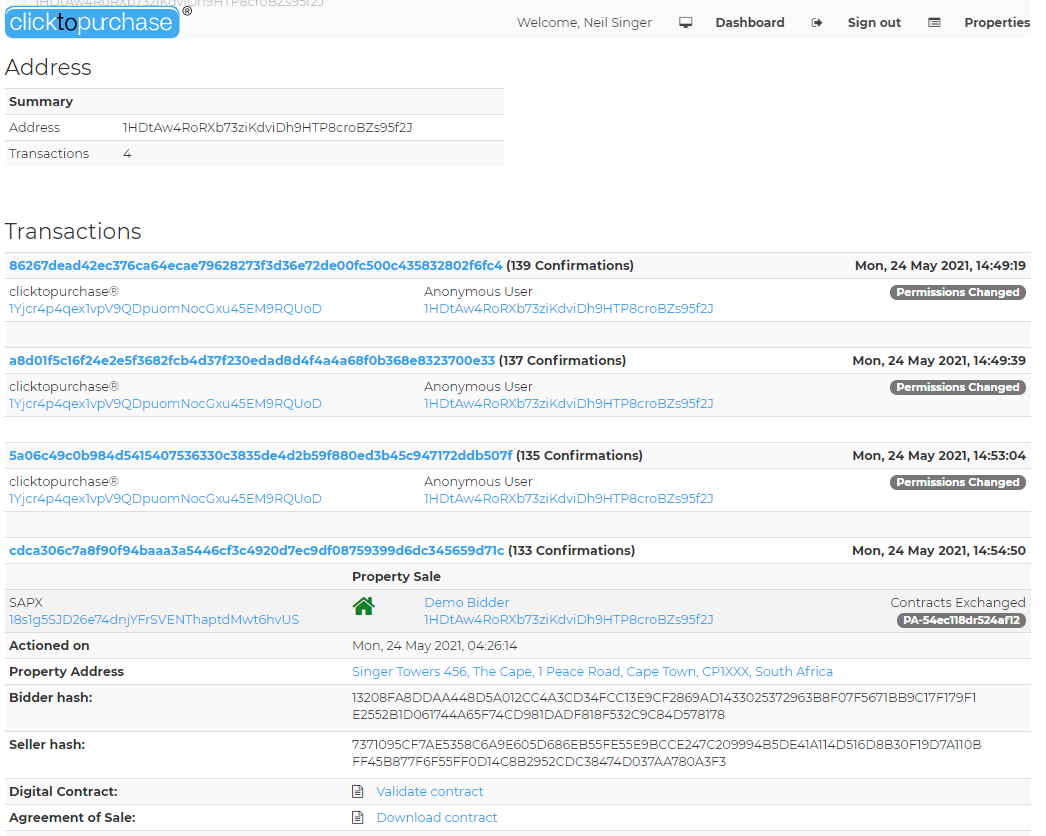 Thanks to the clicktopurchase® Blockchain, no one can challenge the audit trail, be it a Bidder's application for verification, the level and conditions of an offer and the terms of an executed contract. All your actions are recorded and can be found in the Blockchain. 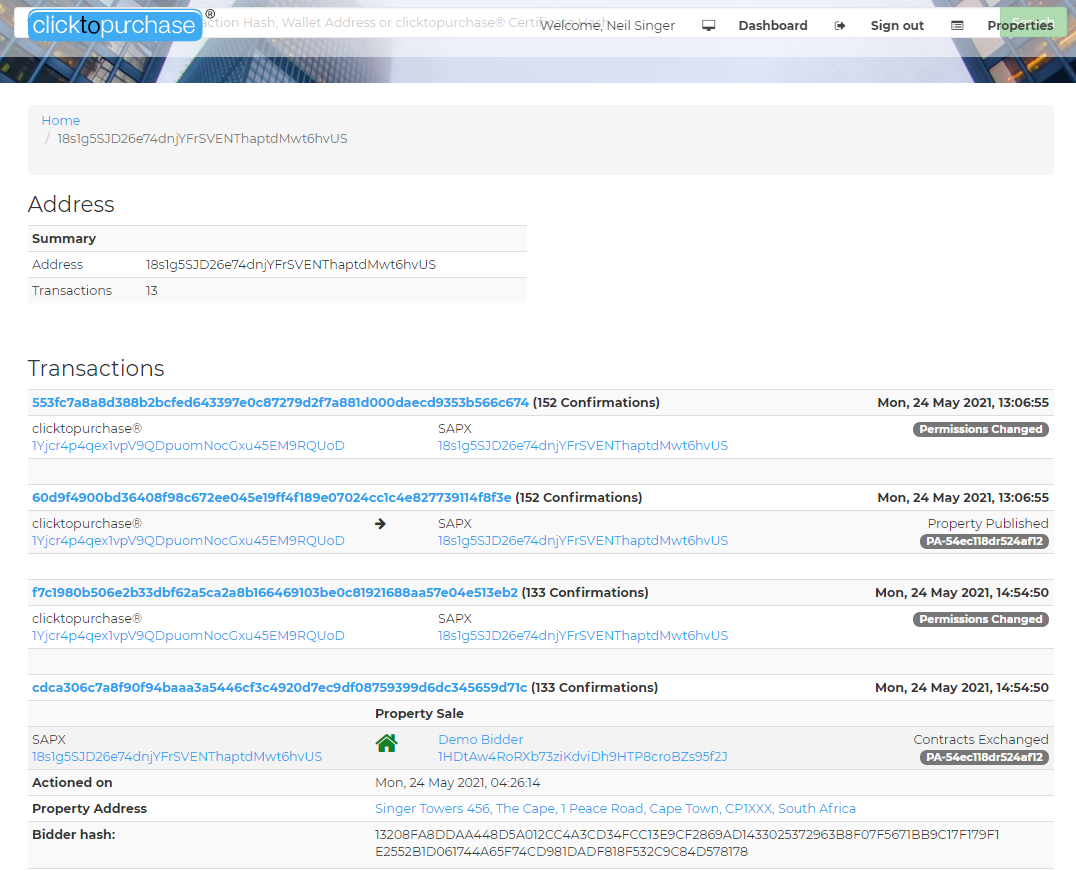 You have absolute and total proof. This adds a layer of security and trust to our platform which is unavailable elsewhere.

When a party submits a clicktopurchase® offer, as well as when it is accepted, the Bidder’s signature is hashed and attached to the Agreement of Sale.

This hashed signature can be seen within the clicktopurchase® Blockchain ledger. 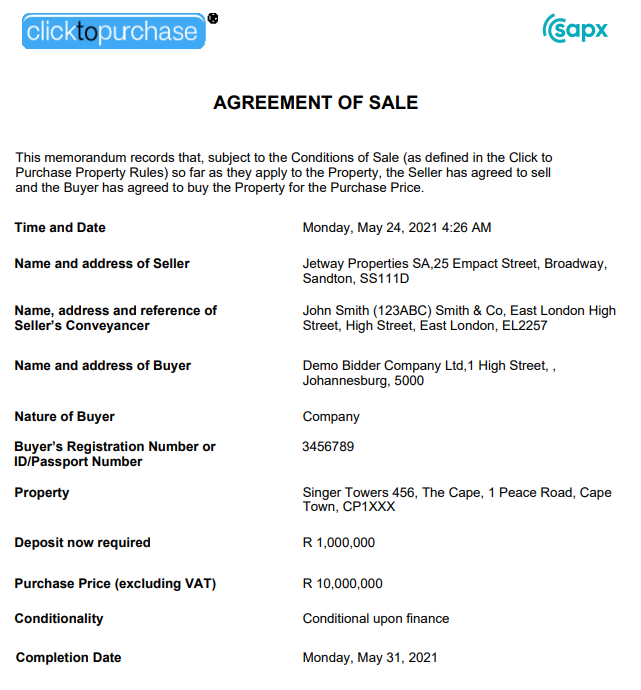 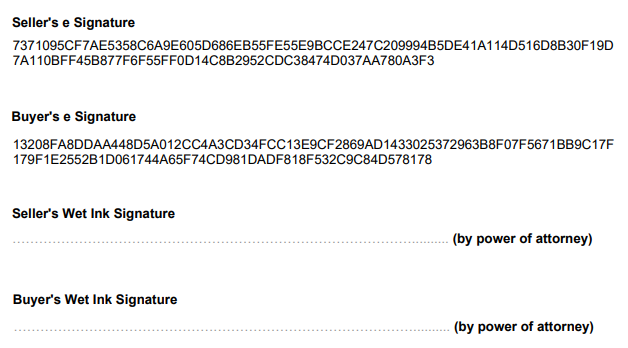 Agreement of sale in the ledger 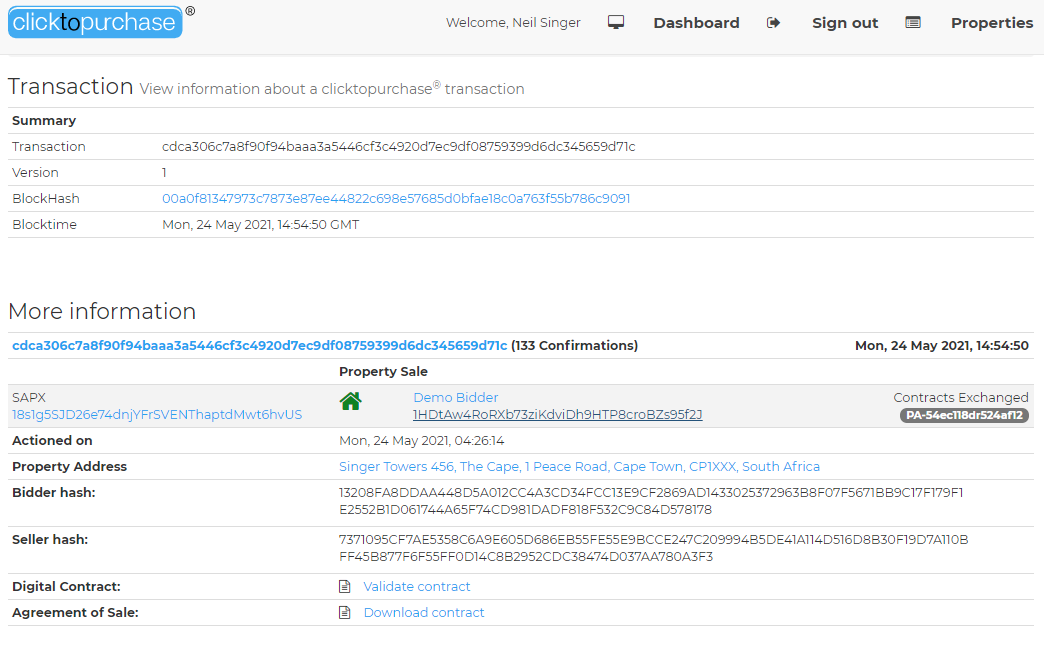 The clicktopurchase® Blockchain ledger provides absolute proof of the audit trail and transactions.

Validation of a digitally signed document

clicktopurchase® provides a mechanism for a bidder and agent to download and keep the digitally signed document. The document can be downloaded from My Account but is also emailed, along with the digital Agreement of Sale contract note, at the point an offer is made and when accepted. This “ctp” file, which is an encryption of all the information relating to the action, can be saved and viewed. 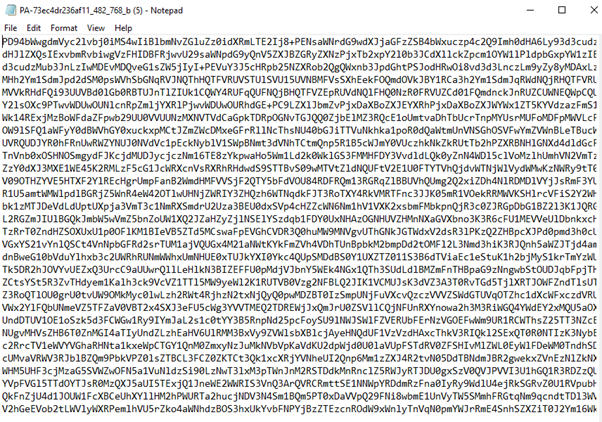 We provide a mechanism to enable a Bidder or the Agent to upload the “ctp” file to clicktopurchase® and validate against the record. For example: 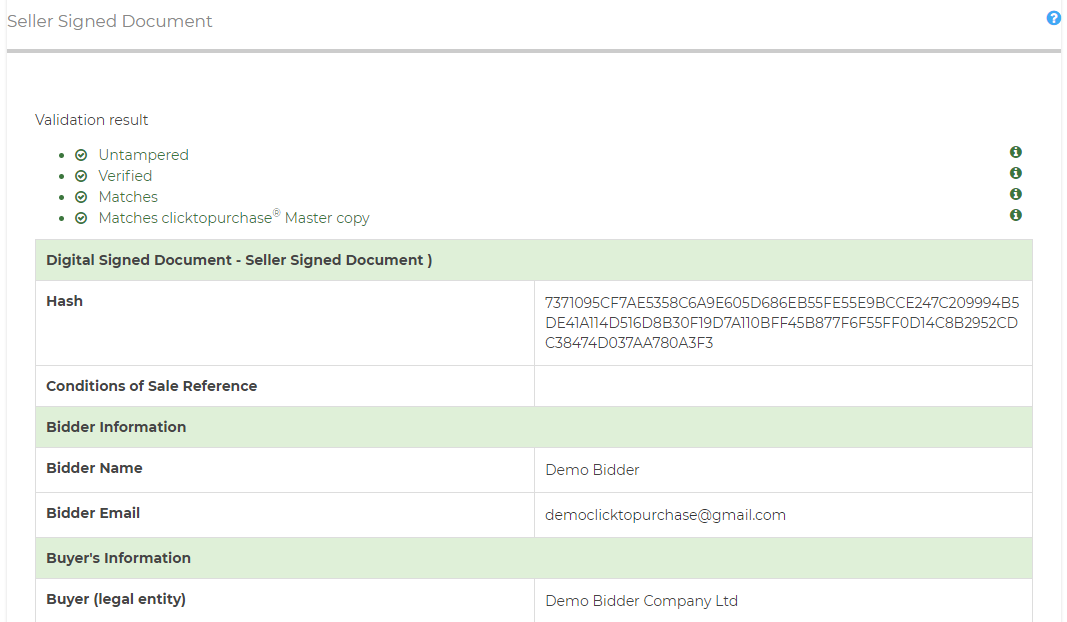 If, however, the data input has been tampered, for example changing the price, the encrypted file will not longer match the system record and the following will occur. 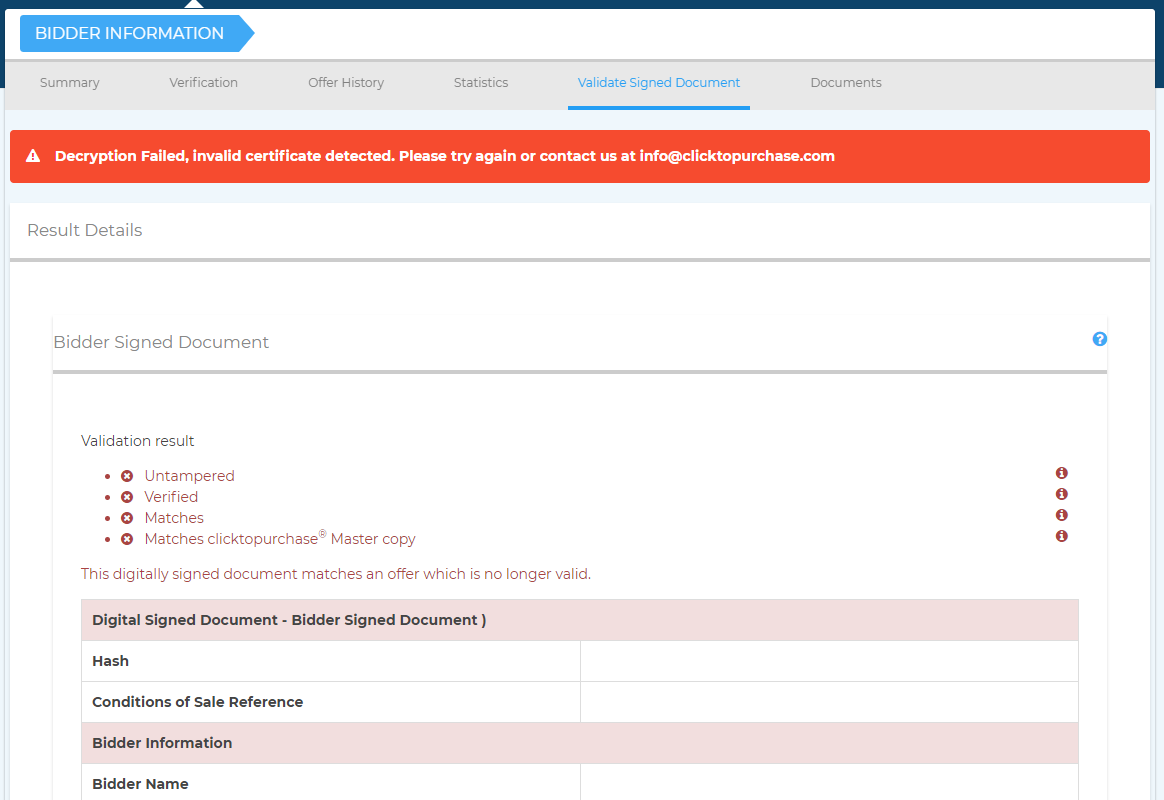 If the encrypted data in the "ctp" file is altered in the slightest way, this validation process would fail and it would be clear that either the file being uploaded or the file recorded in the platform had been changed. This is how one can be certain that the hash, representing the encrypted information in the "ctp" file, is generated from the true transactional data.

We then also record the transaction hash in the clicktopurchase® Blockchain. Here one can also “validate the contract” to see that the document recorded in the immutable ledger matches the one generated by the Clicktopurchase® platform.

CREATING, RECORDING AND KEEPING THE AUDIT TRAIL BY THE CLICKTOPURCHASE® PROCESS ENSURES COMPLETE TRANSPARENCY AND TRUST