Written by Olivya
Updated over a week ago

Actions are polite, waiting until the previous step in the automation has completed before taking place (just like conditions, but unlike events). Within your visual automations, they're denoted in green.

Actions are the backbone of automations. Many of the most commonly-used automation functions (like adding subscribers to a sequence) are accomplished with actions!

Understanding how they work is important for automating effectively, so let's dig in.

Action will be selected by default, so after that you just need to select what type of action you want to use.

In the next section, we'll go over each type of action in turn!

The 6 types of actions

Each type of action serves a different purpose. It's not uncommon to have multiple actions within one automation, of the same or varying types.

Here's what they're all used for, and how to set them up:

This type of action will add the subscriber to an email sequence of your choosing.

☝️NOTE: The subscriber will stay at this step in the automation for the duration of the sequence, and only move on to the next automation step once they receive the last email from it.

This type of action will hold the subscriber at this step for a duration of your choosing.

Once the duration is up, they'll move on to the next step in the automation. You have the option to delay for weeks, days, hours, or even minutes!

✨TIP: Delays are great for adding a bit of a 'pause' in between steps in your automation (in between sequences, for example).

This type of action allows you to adjust which automations this subscriber is in. There are 3 sub-options:

This will add the subscriber to another automation of your choosing, while still keeping them in the current automation.

☝️NOTE: Using this type of action will automatically create a new entry point in the other automation you're adding them to.

In the above example, the subscriber will be added to the 'Photography Course Pitch' automation, while continuing through the remainder of the current automation as well.

This will remove the subscriber from this automation.

This option will be greyed out unless you're adding it at the end of an event or condition branch. That's because an automation needs to have multiple branches in order for this to work. Otherwise, the subscriber will naturally exit the automation once they reach the end of its main/only branch (no action is required for that).

Remove from another automation

This will remove the subscriber from a different automation of your choosing, while still keeping them in the current automation.

(If the subscriber isn't actually in the other automation, this step will just be ignored.)

✨TIP: This can be handy for making sure subscribers are not in two overlapping automations at once when moving them around!

Once added to your automation, this type of action will look like this:

After receiving the tag (or having it removed), the subscriber will move on to the next step in the automation.

This allows you manipulate the value of a subscriber's custom field from directly within an automation! Just select which custom field you're acting upon, and then add the value you want to change it to.

For example, the configuration below will set the value of the 'Photography Experience' custom field to 'Beginner': 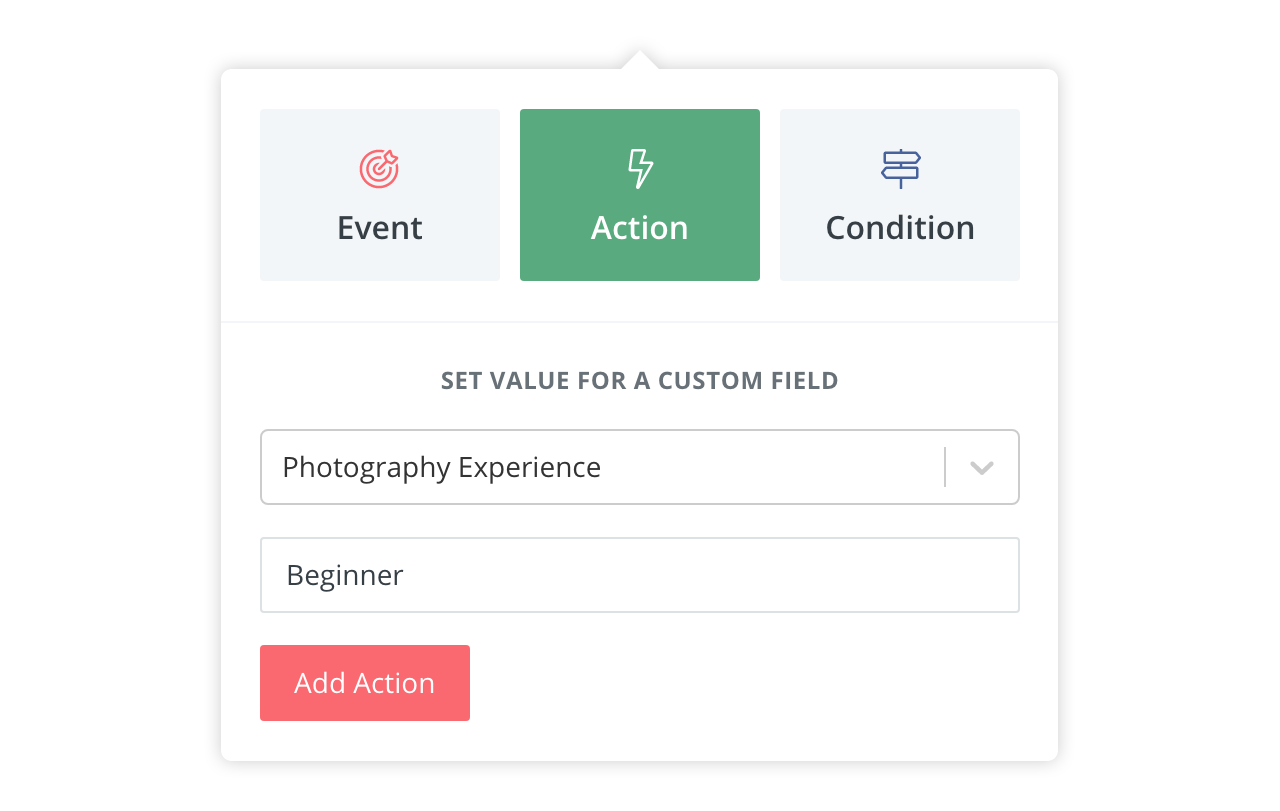 ☝️NOTE: The custom field needs to exist in your account in order to show up in the dropdown. We have a tutorial on how to create custom fields here!

Then once added to your automation, it'll look like this:

✨TIP: If you're comfortable with coding, you can do some cool things with Liquid here! Check out the section on automations contained in our advanced Liquid guide for ideas.

This type of action allows you to unsubscribe subscribers from directly within an automation! Any subscriber who reaches this step will be unsubscribed from your email list.

Similar to the 'Exit this automation' action described above, this type of action can only be used at the end of an event or condition branch.

✨TIP: This has helpful applications when it comes to cold subscriber pruning, since you can now fully automate the removal of cold subscribers from your list!

How to edit actions

To edit an action, simply hover over it and then click 'Edit step' when it appears:

(The same goes for editing any other steps in your automation!)

☝️Please be aware that modifying an action will not reset its stats within your automation. Stats are cumulative, they will include subscribers of the previous action in addition to the new version.

Actions are commonly used for connecting forms to sequences and automatically tagging subscribers when they opt in. Those are great basic automations to get started with using actions (but the sky's the limit!).