A guide to the sequence reports page and what all those statistics mean.

Written by Olivya
Updated over a week ago

The sequence reports page is a great resource with valuable statistics.

In this article, we’ll go over the meanings of all the numbers provided on this page.

First things first: go to Sequences under the Send tab in the navigation and click the sequence whose stats you want to get. Then, click into the Reports page at the top of the screen here:

Now we’re ready to dive in!

You’ll notice that the Reports page is divided into two main sections: the sidebar, and the per-email stats on the main body of the page:

We’ll go over each section in more detail below. The main distinction to understand is that the stats in the sidebar are more global, whereas the per-email stats are specific to those individual emails only. 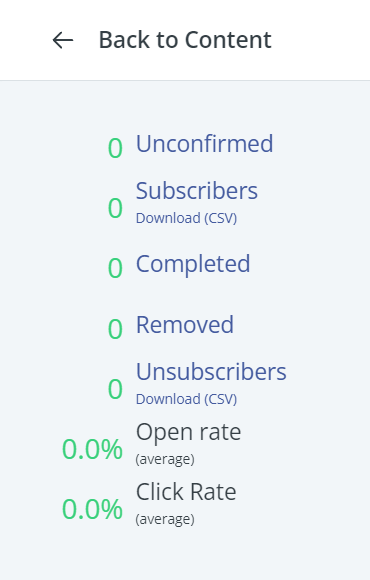 This is the total number of subscribers who are unconfirmed in this sequence. This means that you have double opt-in enabled on your email form, and these subscribers have not clicked the confirmation button in the incentive email that was sent to them to confirm their subscription.

This is the total number of subscribers who are active in your sequence.

If a subscriber gets added to a sequence via a visual automation, they will receive the "Completed" status once they finish the sequence. Once subscribers are marked as "Completed" for a sequence, they will not receive any further emails from that sequence.

As a result, subscribers added to a sequence either manually or via an automation rule will continue to receive any additional emails added to the end of the sequence. This is so long as any new emails being added come after the last email they received within the sequence, and not before that point.

Subscribers added to a sequence via a visual automation will not receive any additional emails added to the end of the sequence unless you hold them in an evergreen sequence.

The number of subscribers that were taken out of this sequence, either because they were pulled out by an automation or because of a bulk action.

This is the total number of subscribers who have been removed from this sequence, for one of the following reasons:

You can click on any of the the above 4 categories on the sidebar of the Reports page to view the list of the specific subscribers who fall under each. You are also able to download a CSV file containing the active subscribers and/or unsubscribers from this sequence using the links provided.

The average open rate percentage for all emails in this sequence.

The average click rate percentage for all emails in this sequence.

The open rate percentage for this specific email.

The click rate percentage for this specific email. It is calculated using this formula:

NOTE: Even if a subscriber had clicked multiple links in the email, that email will still be counted only once for the purposes of calculating the click rate.

The number of subscribers this email has been sent to.

The number of subscribers who have unsubscribed from your list via this particular email.

You can take things one step further by clicking on any email in the Reports page, and you’ll be taken to a page where you can access even more stats:

From that page you can click on the links on the right sidebar (Recipients, Opens, Clicks and Unsubscribes) to see exactly which subscribers took action to fall under each of those categories.

For Clicks, you also have the option to identify which subscribers clicked on each link.

Just click the number of subscribers (as shown below), and you’ll be able to see which subscribers clicked on the corresponding link:

Creating, scheduling and sending a sequence in ConvertKit