Georegistration in FLOW - Get speed data and more!

How to georegister a scene by providing WGS 84 or UTM coordinates to its chosen points.

Georegistering your analytics allows you to transform the pixel world to real-world coordinates and measurements. This allows you to pinpoint the actual location of objects and therefore to measure distances and get speed data (in km/h), which in turn can give you a better overall understanding of traffic. Possible uses include detecting traffic congestion based on speed or identifying how various factors such as time of day, vehicle category, the direction of movement, and others relate to speed.

Overall, the speed measurement deviation in a scene with a well set up georegistration can be up to 5% for speeds up to 50 km/h and up to 10% over 50 km/h.

You can access georegistration by entering an analytic, selecting Analytics Settings in the left menu, then Reference frame settings, and Multi-point. 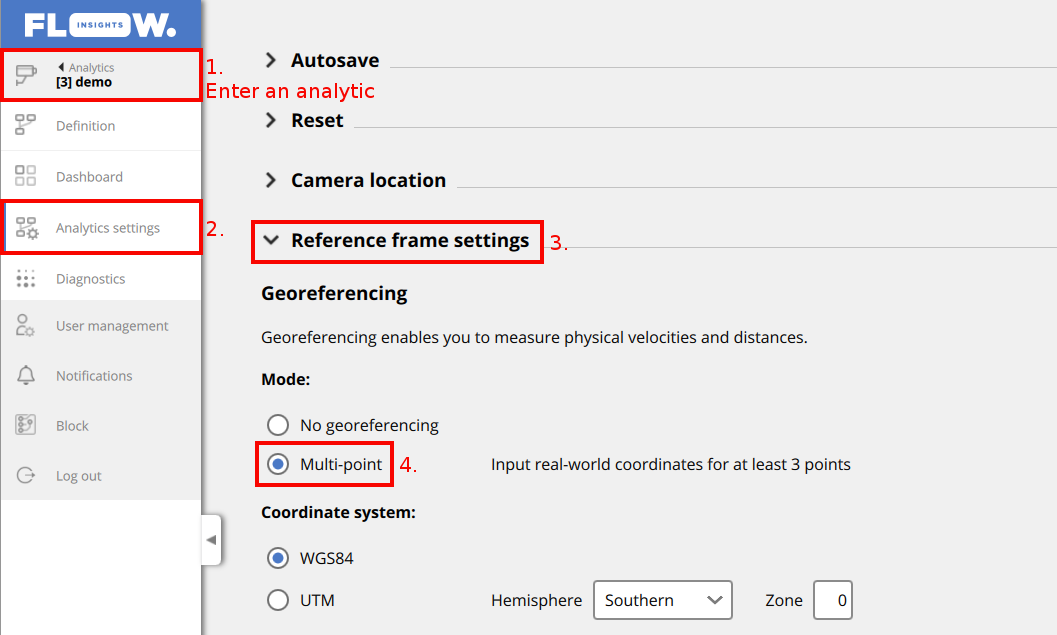 The registration itself is done by mapping three points in the scene to real-world coordinates. There are two possible coordinate systems in which you can do this.

Let’s see them both in detail.

WGS 84 is the typical coordinate system in which GPS operates — the coordinates are specified as the latitude and longitude of the Earth’s ellipsoid shape. To georegister an analytic with it, you need to obtain the coordinates of at least three distinct points on the same horizontal surface in the scene. This can be done with precise GPS measurements, but finding the coordinates on Google Maps is good enough.

Simply pick points such as building corners, traffic light poles, public light poles, or even edges of lines on the road can work. The points should be close to or in the traffic objects’ paths and spread around the whole area where they travel. Make sure the points don’t all lie on the same line. If using a tall object such as a tree for a mark point, you need to make sure you place the georeferencing point at the location where that object touches the horizontal surface. You can zoom in to help you position the marking point with better accuracy. The further the point is from the camera, the more sensitive the georeferencing process is to the precision of the point's placement.

Be wary of cameras with heavy lens distortion, like fisheye cameras. In such a case, unfortunately, georegistration accuracy will be poor everywhere but around the center of the camera video feed.

In the bicycle path example below, you can see that the camera angle is far from being perpendicular to the road and captures quite a large distance. In such cases, it’s better to choose more than three points to increase the accuracy of the georegistration process. Possible georeferencing points include e.g. the two trees, five roadside bollards, the painted road sign, and the corner where the road surface widens. Most of these objects are a part of the cyclist path and therefore form a horizontal surface. 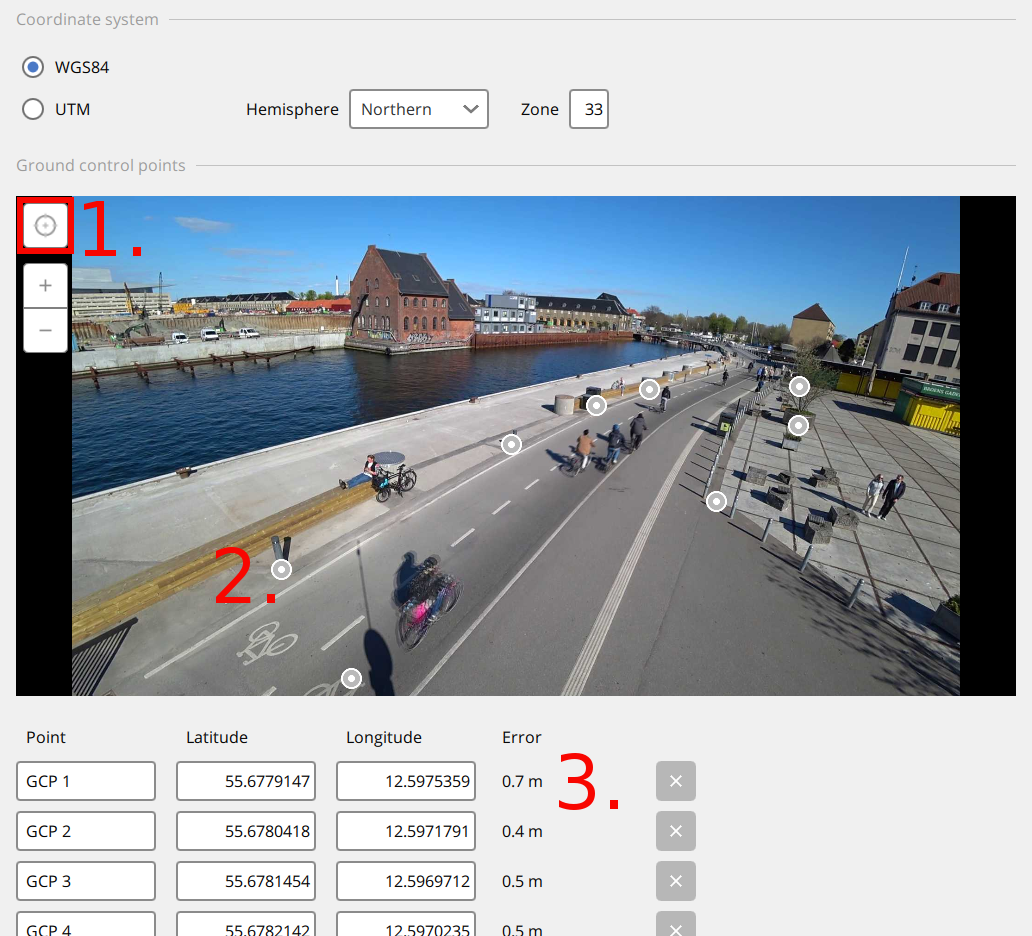 Now let's find out the GPS coordinates of our chosen points in Google Maps. There, you can simply right-click at the point whose coordinates you want to find out. This opens a menu—at the top of it, you’ll see the coordinates. Click them to copy them to the clipboard so that you can paste them into FLOW Insights.

The example below shows how the same points that we’ve chosen in FLOW Insights are found in Google Maps. 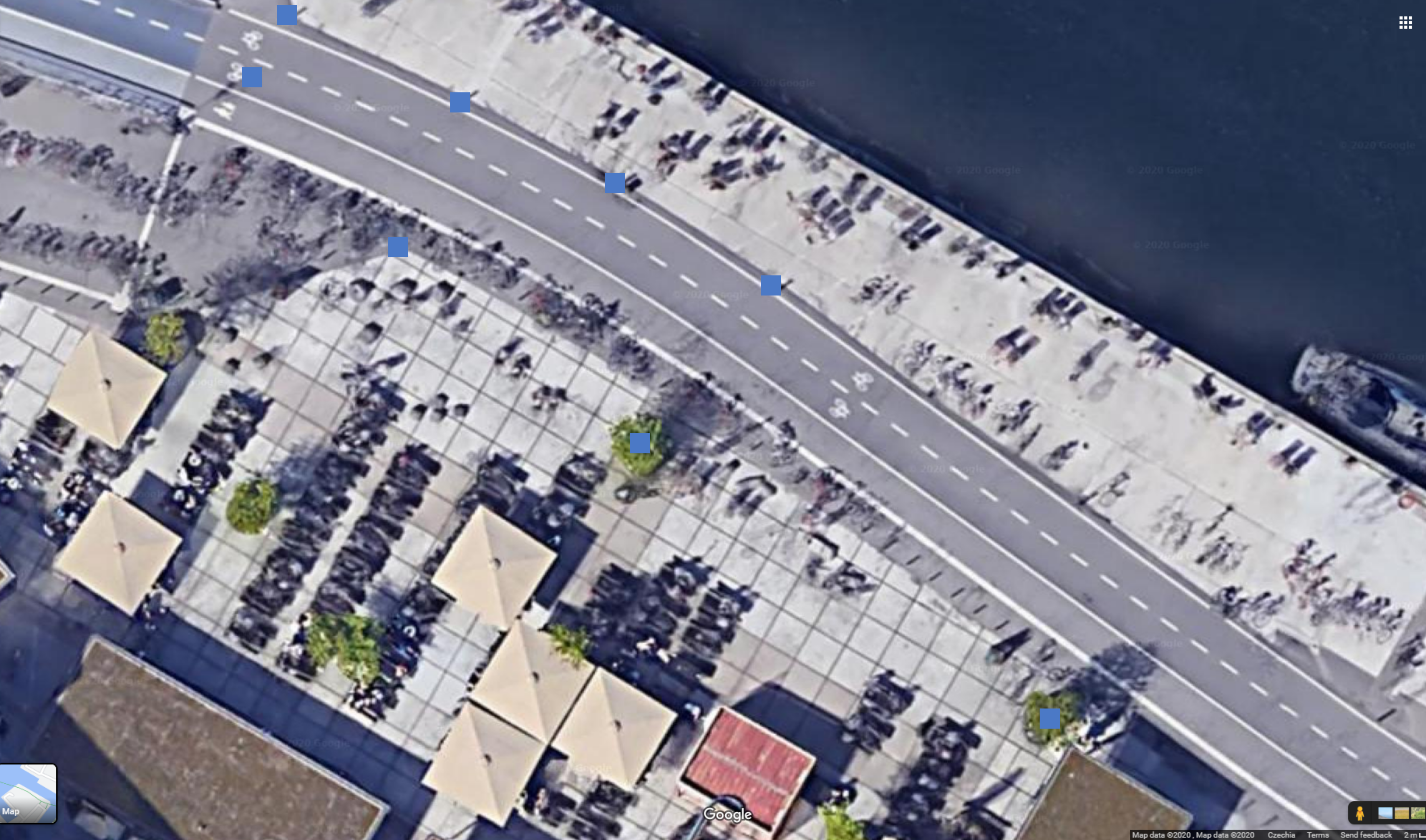 The Error column that you see in FLOW Insights next to the points' coordinates will be explained in a later section.

The UTM system applies the transverse Mercator projection for assigning coordinates to locations on the surface of the Earth. It defines 60 standard zones which are six degrees of longitude wide. Each zone is further divided into its north-hemisphere and south-hemisphere part. FLOW doesn't use latitude bands, only the hemisphere designation.

It's possible to find out UTM coordinates of a specific point with online tools like Geoplaner and input them in FLOW just like with the WGS 84. However, the power of UTM lies in the ability to define your own local coordinate system. That's because unlike WGS 84, UTM coordinate system is orthogonal. This means that it's basically a grid, where the Pythagorean theorem is true and you can work with it on a local level just like with a cartesian coordinate system. If you define a local system, it doesn't matter which hemisphere and zone you select. What matters is only the relative values of coordinates. Then, the absolute global positions of traffic objects reported by FLOW will be wrong, but speed, acceleration, and position within the local coordinate system will still be true.

Let's see a simple example of how yo ucan define your own coordinate system. 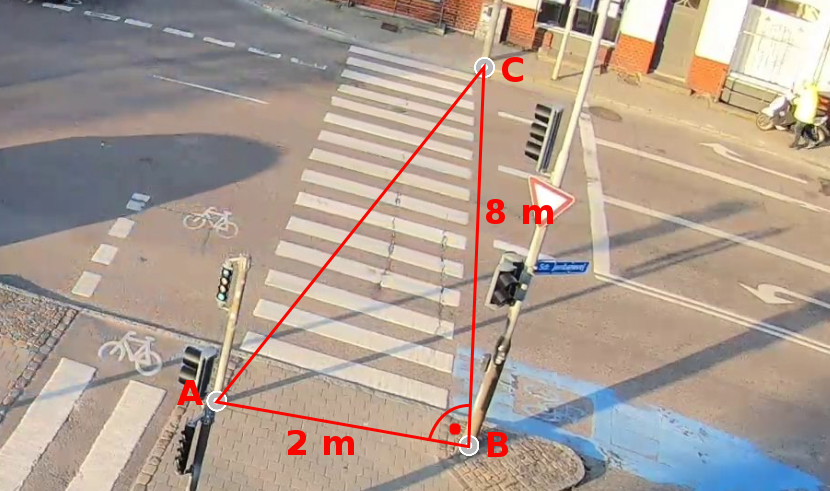 For the sake of this example, let's say you arrived personally at this intersection and decided to use the highlighted traffic light bases as reference points. Through measurements, you found out that the distance between A and B is 2 meters and between B and C it's 8 meters. You also found out, that the angle between AB and BC is 90°. That's all the information you need to create a coordinate system.

Now you have your coordinate set up and should be able to correctly measure traffic object speeds and relative positions.

For determining the right number and placement of reference points, follow the same guidelines as in the previous section. Another example of a good choice for reference points might be the corners of an intersection if you know that it's square or rectangular and you know the length of each side. Here's an example of a square intersection with a hypothetical side length of 12 meters. 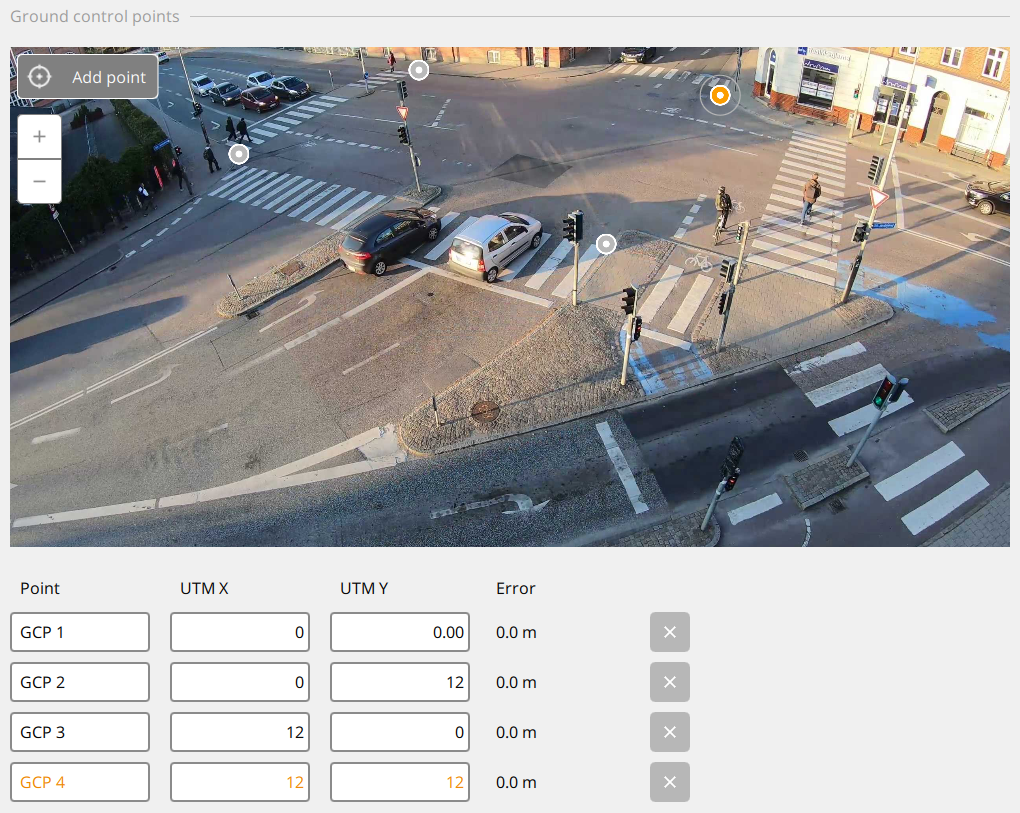 Finally, let's talk about how to interpret the Error column. This is a bit technical, but the general guidelines will be summed up in the next paragraph. When you define points and their coordinates, FLOW tries to fit a valid plane so that it intersects all of them and creates a homography. This is always possible with three points, so the Error will be 0. With four or more points, FLOW may need to move some of them a short distance so that they'd lie on the plane. This distance is the Error. With four points, the Error will usually be so small it will be displayed as 0. With five or more points, the Error may start to be noticeable.

However, smaller Error values don't necessarily mean better georegistration precision. It just means less ambivalence. With five or more points, it's natural to have small error values due to measurement errors of the original coordinates. Adding more points is preferred to trying to minimize the Error. On the other hand, if you see an Error of more than a few meters, then it's possible there's something wrong with the coordinates you entered, so try to double-check them.

If you need any help, click the button on the bottom right to chat with us or contact us here. We are happy to help!