How we build turnout scores- Nov 2021

At Deck, we build predictions using an approach we call “contextual inference.” This approach uses hard data on individuals’ past behaviors, and the context around those behaviors, to predict what new people in new contexts might do. In this documentation, we’ll discuss how we are using that approach to determine which registered voters are most likely to cast a ballot in a given election.

WHAT MAKES OUR APPROACH UNIQUE

Most turnout predictions in Democratic politics use a “flash forward” approach. With this method, modelers identify past elections that might be similar to an upcoming election, then train a model to predict which traits predicted a voters’ decision to cast a ballot in the past. That model is then used to predict individual-level voter turnout in an upcoming election.

However, this approach doesn’t always work well. In 2016, 2018, and 2020, the size and composition of the electorate broke from historic precedent in significant ways. And in less high-profile elections, we’ve seen enormous variability. This can even be true when two elections are on the same day in the same region for the same office.

On June 20, 2017, special elections for US House seats were held in Georgia’s 6th district and South Carolina’s 5th district. The race in GA-6 was expected to be very close and it became a national flashpoint for assessing where the country’s politics were headed just months after Donald Trump was inaugurated. Campaigns and outside groups spent over $55 million and 260k voters cast a ballot — 24% more than in the 2014 midterm election. In the end, Karen Handel beat Jon Ossoff by 3.6pp.

On the same day, 250 miles to the east, the special election in SC-5 attracted 96% less media attention. Campaigns and outside groups just over $2 million. In the end, 88k ballots were cast and Ralph Norman, the Republican, beat Archie Parnell, the Democrat, by just 3.1pp — a smaller margin than the race in GA-6! In SC-5, the electorate included only the most engaged voters, who at that time were Democrats. In GA-6, the high level of spending and media coverage had engaged a much larger electorate.

To us, this illustrates that each person’s likelihood of voting hangs on a number of contextual factors related to each specific election and the campaigns they’ll find on the ballot. We’ve built an approach that recognizes this — incorporating all of the contextual factors related to each election that may have influenced a registered voter’s decision to cast a ballot.

The first step in preparing this model is to assemble its training data. To do this, we combine a registered voter’s traits (including their demographics and previous turnout record) with the details of each election (including whether it’s a primary or special election, the ease of casting a ballot, and any eligibility constraints), the traits of the candidates on the ballot (e.g., their incumbency status, demographics, and ideologies), and contest-level traits for all of the races on the ballot (e.g., which demographic groups are making contributions to campaigns, how much coverage of each race is in local media, and how much is being spent) to take a holistic view of a potential voter and the factors that might have influenced their decision to cast a ballot. 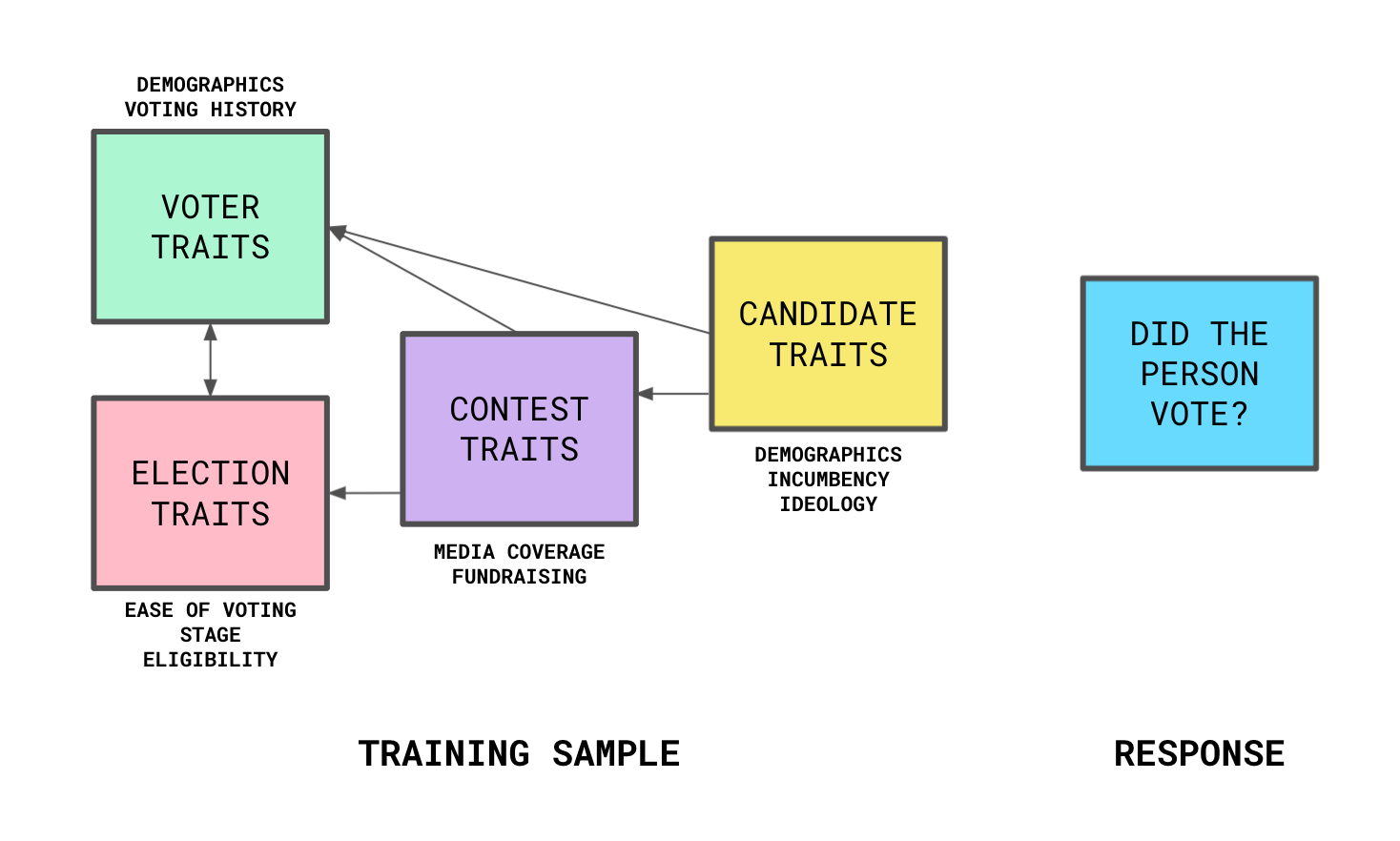 Next, we use our training data to identify the features most likely to have high predictive power -- either alone or in combination with others -- and those most likely to confuse a model into overfitting or diminish the impact of other features. At this stage, we (1) prune highly correlated features and features without meaningful variation, (2) use a technique called VSURF (variable selection using random forest) to better interpret how features will interact with each other, and (3) impute missing data.

Finally, we design a deep learning architecture to predict our outcome. In this case, we’ve built a six-layer neural network. The model uses a sigmoid activation function and a stochastic gradient descent optimization algorithm, optimizing for a low Kullback–Leibler divergence.

To validate this model, we suppressed a randomly selected batch of elections from our training data. We then used the data associated with those elections to test the model’s accuracy.

When validated on over 35,000 testing samples, we found that our turnout model’s area under the ROC curve was 0.91, indicating that the model’s ranking of ballot return likelihood aligned with actual ballot returns in our testing samples 91% of the time. The overall binary accuracy of our testing predictions was 82%. And in a lift chart organized by decile, the top decile had a lift of 224 while the bottom had a lift of 2. This means that voters with the top decile of scores were 2.2 times more likely than a random voter to return their ballot. Those in the bottom decile were about 2% as likely to return their ballot.