All Collections
About Triggers
Using event data in a handler

Using event data in a handler

When creating a trigger for an object, there are two things which specify how the trigger will behave: 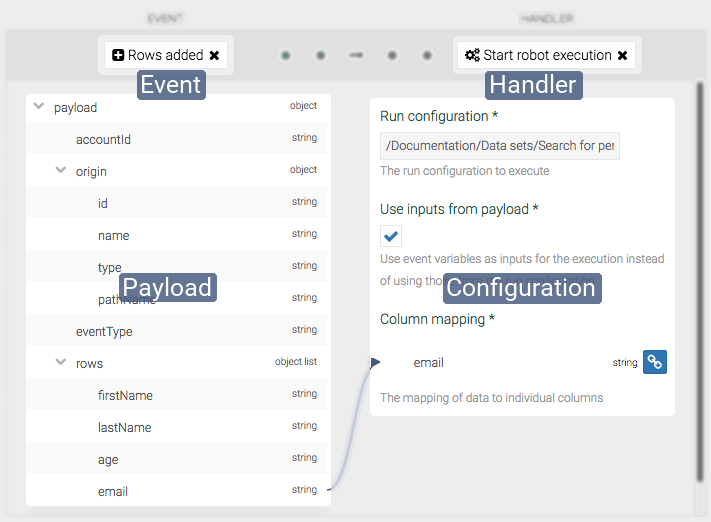 The event itself does not have any configuration options - you simply select an event to listen to, which will always have the same payload structure. The event handler, on the other hand, is usually fully configurable - different event handlers have different configurations, but the way of interacting with the information provided in the event is always the same.

Many fields in event configurations are fixed - that is to say, they are values which are defined in the trigger editor and do not depend on the event type. Other fields are mapped, that is to say, their value depends on the value of a given field in the event payload. Most fields are mixed, in that they can either have a fixed value or be mapped to an event payload property.

Mapped fields provide a list of properties from the event payload which can be selected. Mixed fields provide the option to treat the field as a fixed value or as a mapped value. For example, in the call webhook handler, the payload field is a mixed field, and the value of the payload can either be set at configuration time or when the event is received: 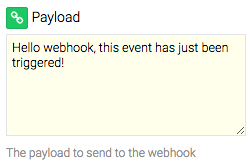 The chain button toggles between treating the value as a fixed values or as a mapped field. When the button is green, it indicates that the field is being treated as a fixed value - in this example, whenever the webhook is called, the payload sent to the webhook will always be the same (independently of what the event type is or what its payload contains), the string "Hello webhook, this event has just been triggered!".

When the chain button is blue, it indicates that the field is being treated as a mapped property:

Handlers that contain a column mapping field allow you to define the kind of data which you want for each row that is being added - each dictionary entry, each data set row, each robot execution input, etc. 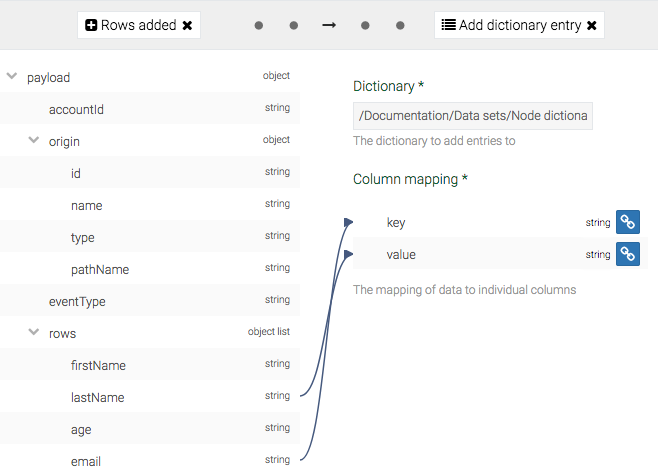 In this scenario, a trigger has been created for the Rows added event of a particular data set. The data set has a data type which contains four string (text) fields, firstName, lastName, age and email. The Add dictionary entry handler has been selected to be activated when this event is triggered. It has been selected to add the entries to a dictionary called Node dictionary. The key and the value of the selected dictionary are text values, not objects, and that is reflected in the column mapping options. The value of payload.rows.email has been mapped to the key of each new entry, and the value of payload.rows.lastName has been mapped to the the value of each new entry.
With this configuration in place, let us assume that a set of 30 rows is imported to this data set. What will happen next is that this trigger will be invoked - An entry will be created for each of the 30 separate rows, with the email as the key and the last name as the value. Once they are created, they will be added in bulk to the dictionary.