How to remove a scenario from the cash flow

Written by Jane Gilhooly
Updated over a week ago

If you ever want to remove a scenario layer just click the cog symbol shown next to the scenario dropdown.

This will generate the following popover containing details about the layer. 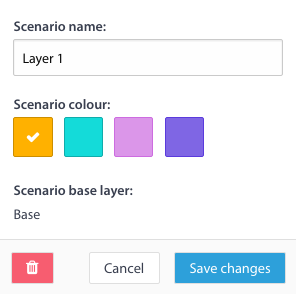 To remove that scenario layer click the trash can symbol shown in the bottom left of the popover, simple as that.

You can also update the name and colour of the scenario from this popover, along with double checking what the scenario base layer is.