All Collections
Templates
Add tables to a contract

Add tables to a contract

To add tables to contracts, the first step is to create placeholders for these table in your Team's template(s). Note that only Team Editors or Owners have access to the template editor, where these placeholders are created.

Table placeholders are added to templates as a variable type called a table variable. Create a new table variable by clicking the "new variable" icon at top center of the template editor screen:

Format the new variable as a table by choosing "Table" from the drop down list: 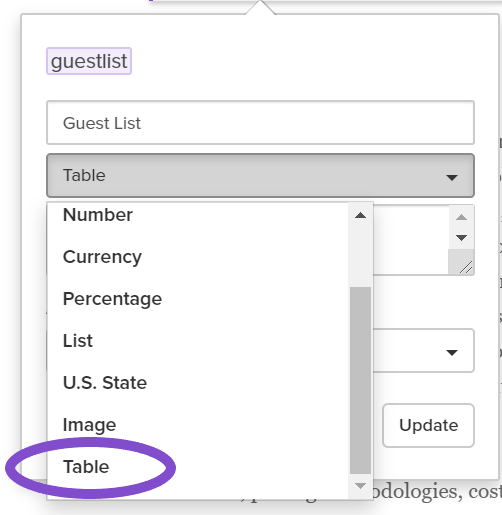 Once "Table" is selected from the list, fill in the name of each column in the table. For example, if the table to be created is a guest list for a catered event, the columns might include "Name," "Table Number," "RSVP," and "Dinner Selection" as seen here: 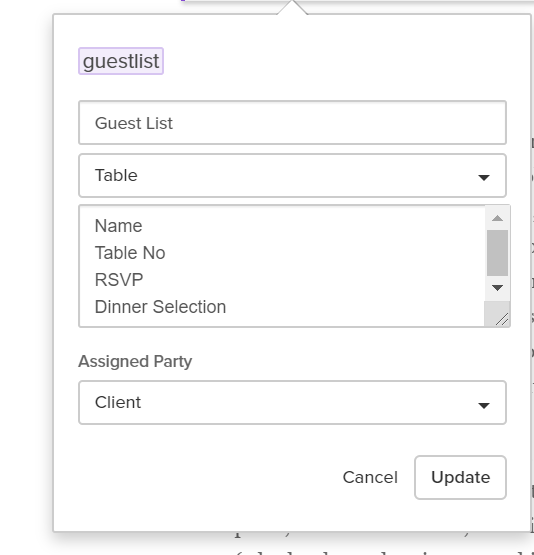 Once the variable has been created in the template, defined column headers appear in each new contract where this deal-specific information can be filled in row-by-row:

To save the information entered into a table row, press "enter" at the end of the row. This will add a new row to the table which can be filled in, or, if the table is complete, may be left blank. Blank rows will not appear in the final contract/pdf.

Note that during contract review if a table variable is present at least one table row must be added and something entered in at least one box. For unneeded tables, "N/A" may be added to close the variable and proceed to signing.