Know the component and how to use it.

Block Execution declares a part of a pipeline for a specific purpose. It can be used to:

Block Execution is part of a set of components that work with subpipelines to execute their functions.

To work with this type of component, you must consider 2 important concepts:

Block Execution doesn't have any specific configuration to function. All it takes is for you to build the “onProcess” and “onException” subpipelines.

Defining the executed subpipeline as part of the block

To define the subpipeline to be executed, just click on the “onProcess” icon of the component: 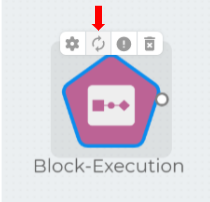 When clicking on this icon, a subpipeline will be created (or shown, if it already exists). Then all you have to do is to build the desired flow as the execution need demands.

IMPORTANT: this pipeline input will be fed with the message that comes before Block Execution.

When a flow deviation component is used, such as Choice, multiple paths are created in the pipeline to attend the desired flow deviation. For example: 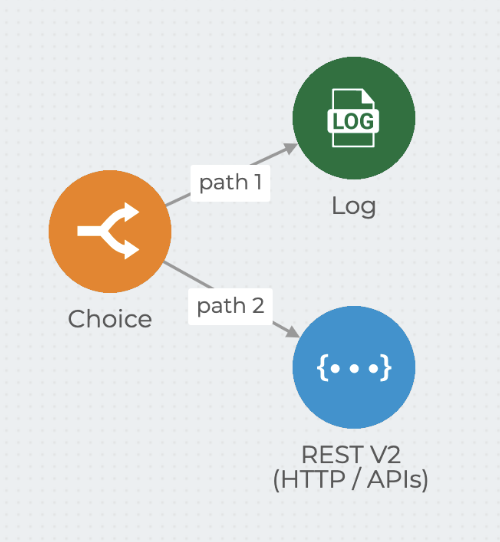 For the case above, you can see 2 flow deviations: path1 and path2, which take to completely different paths in the pipeline. Let's say it's necessary to bring these paths together to move on with the pipeline deployment. The Block Execution component has the function to group different paths in a separate execution block. When one of the paths is done, the control goes back to Block Execution, that is followed by the next component. Check it out:

For the other example above, Block Execution is followed by JSON Generator. Inside the “onProcess” subpipeline of Block Execution, A choice component with deviations was used.

When deviations come to the end, they close Block Execution, which returns to the main pipeline and executes the following component - in this case, JSON Generator.

That way, it's possible to bring together and organize subpipelines that have flows with ramifications.

As all the other components that have the “onProcess” and “onException” subpipelines, Block Execution also handles errors by executing the “onException” pipeline.

An error can be caused by other components when they identify adverse situations. Generally, the components have a configuration property named “failOnError”, which controls if you want to generate an error that might be handled in “onException” flows.

So, when a component "throws" an error and has the “failOnError” property enabled, Block Execution intercepts the errors and sends its for handling in the “onException” subpipeline.

These are the special situations you must keep in mind: