All Collections
For Daycare Parents
How To's
Dropping Spots to receive a portion of the sale if you child's spot sells.

Dropping Spots to receive a portion of the sale if you child's spot sells.

How to drop spots on the Hopping In calendar for parents

Written by Sholom Strick (HoppingIn.com)
Updated over a week ago

Dropping Spots is intended for parents who regularly attend daycare and want to list spots when their children can’t attend. Parents will receive a partial credit if the spot sells.

Parents who regularly attend daycare (such as families who attend 5 days a week or 2 or 3 days a week) can drop spots. If the spot sells, the parent will get a partial credit which is determined by the daycare provider.

Screenshot of drop spots screen, showing amount of credit towards next month’s tuition daycare is offering if the spot sells. 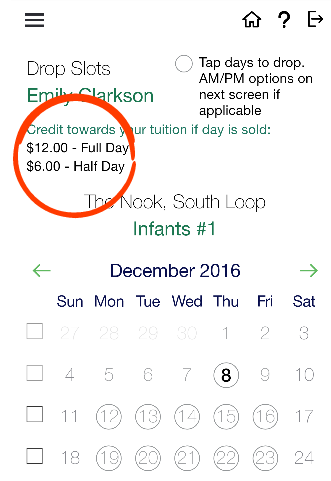 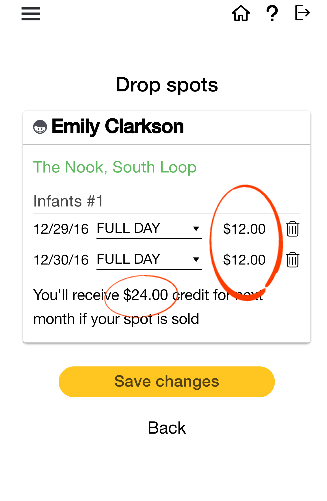 If the daycare room has open spots anyway should a parent still drop a spot?

Yes! Parent initiated drops get credited first if they sell. For example, if you there is a room in the daycare that has a capacity of 10 and only has 5 students enrolled, even if the daycare has already listed 5 spots as being open to book and then one of the parents of the regular 5 students lists a spot by dropping it, that parent will get credited first if a spot sells.

Which parent gets credit first for dropping spots?

Parents get credited on a first-come, first-served basis. So if 2 parents drop a spot on the same day and one of the spots sells, the parent who dropped the spot first will receive the credit first and so on.

How is the parent notified if the spot sells?

As soon as their spots sells they will get an email notifying them that it sold! Additionally parents and the providers will receive a statement at the end of each month indicating the credits due and owed.

How does reimbursement work ?

The daycare determines how much credit (if any) the parent will receive if a spot sells. They will deduct it from your next month’s tuition.