A campaign is a category or bucket into which ideas are placed for organization. It allows members of your community to sort by idea subject. Use cases for campaigns include areas of business (Sales, Marketing, Manufacturing, etc.), regional offices (Northeast, Mid-Atlantic, Southeast, etc.), or types of ideas (Ideas for Productivity, Ideas for Fun, Ideas for Profit).

The campaigns show up on the right side of the portal.

1) Add Campaigns : When setting up an IdeaScale community, 3 sample Campaigns are automatically created. Through 'Manage Campaigns' on the right navigation panel on homepage as well as from Community settings, the administrator can easily add campaign and new campaign group.

2) Add New Campaign Group: Adding a campaign group helps to group all the related campaigns under one section for better operation and control of the campaign. 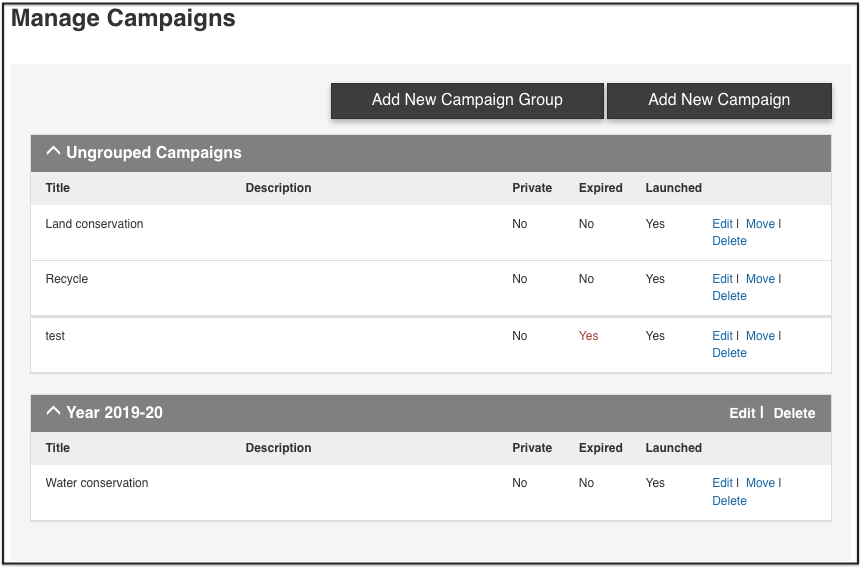 3) Edit : Campaigns as well as their groups can be edited or delete by clicking on the respective links on the right side of the campaign name in Community settings. You can edit them even when they are active. You can use basic HTML codes within the campaign description which follows the same validation rules as Site HTML.

4) Move : To arrange the campaigns in desired order simply drag and drop them.

5) Delete : You can delete them by clicking 'Delete' link, though once deleted all the ideas or question within will be deleted as well and moved to the 'Recycle Bin' or deleted permanently as per the settings enabled by the admin in the Look & Feel section.

Campaign Preview: Once a campaign is created with the few details we have a 'Preview' button on the right side allowing administrator to have a glimpse of the campaign in the homepage while in the draft mode. 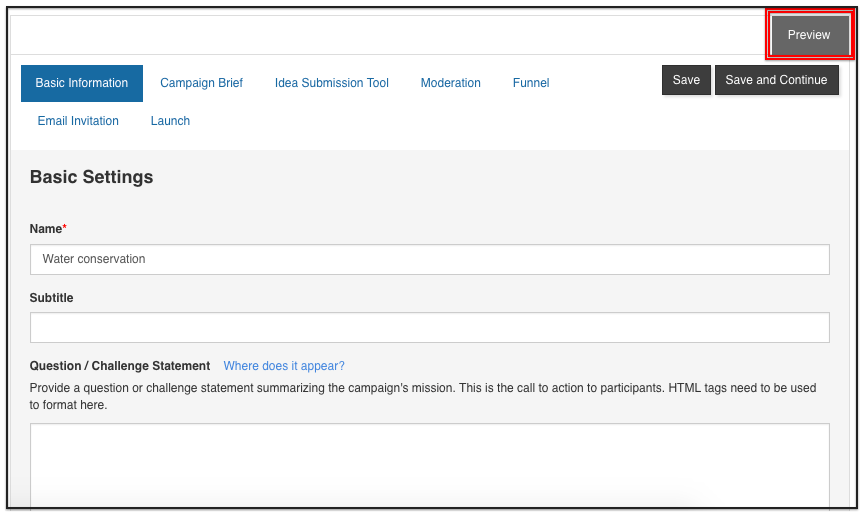 The first section includes the Basic information of the campaign. 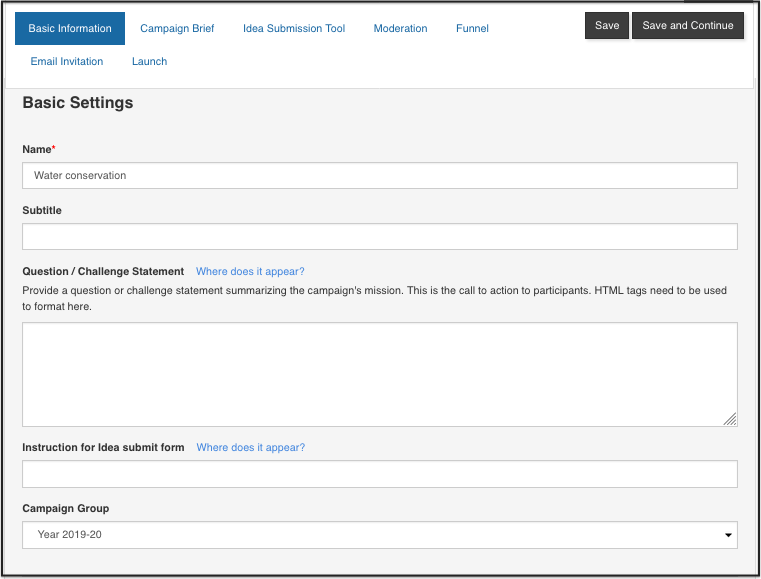 2. Name: A name has to be specified for the campaign.

3. Subtitle: You can add a text or line which will show just below the Title of the campaign.

4. Question / Challenge Statement: Providing a question or challenge statement summarising the campaign's mission will attract the members to participate in the campaign.

5. Instruction for Idea Submit form: This section allows you to put down any instruction for the members which would be visible in the Idea submission form.

Every campaign can be set up with a custom banner image with a recommended size of 690 x 518 (pixels). You can drag and drop the images from your computer or to choose an image which is already uploaded in file library, you need to enable the setting 'Choose an image from the file library'. In case you wish to revert to a default selection this can be done easily by clicking the link below the images. We also support animated GIF's! 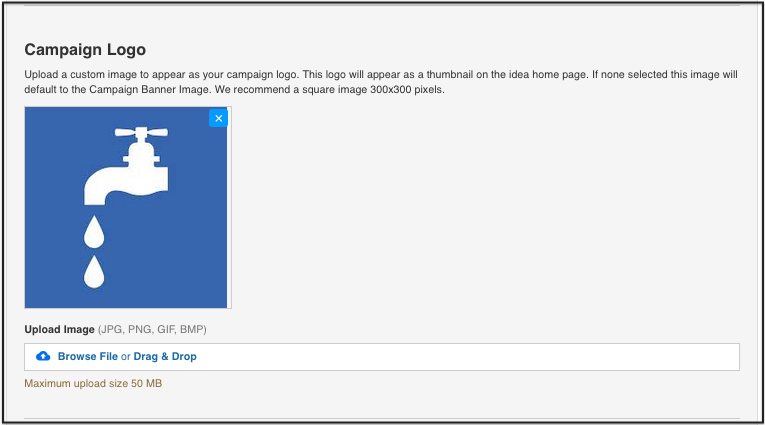 Campaign logo can be uploaded in community file library or by simply using the drag and drop option. The recommended size is 300 x 300 pixels. This logo will appear in the homepage as a thumbnail next to the campaign name. In case there is no logo set then campaign banner will be displayed as the logo as well.

Please Note: In case there is a malicious content, virus or malware during the upload it will show an error and the upload will fail.

1. Allow Voting: Enabling this will allow the members to start voting for ideas in this campaign.

Note: If the voting is disabled for the entire community it will override 'Voting Allowed' for specific campaign.

2. Disable Commenting: This setting allows us to disable commenting in any specific campaign.

4. Member Idea File Attachment Allowed: An administrator of the community can restrict the members from uploading any attachments for the specific campaign.

5. Disable Idea Edit by Submitter: Enabling this will not allow the Idea submitter to edit Ideas in a specific campaign when at the sometime editing ideas from a different campaign would be possible.

6. Allow Users to Subscribe to this Campaign: Turning on this setting will allow the users to subscribe to any specific campaign. Upon subscribing, users will receive email notifications of all new ideas and comments in that particular  campaign. 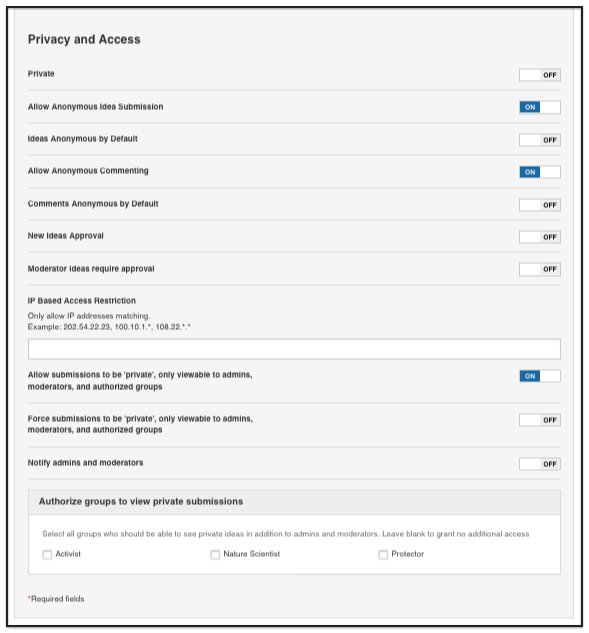 1.Private: Enabling this will set your campaign as private thus offering access to selected users only. Please refer: https://support.ideascale.com/setup/private-campaigns

2. Allow Anonymous Idea Submission: This feature enables the users to submit idea anonymously in the specific campaign while in rest of the community user name will still appear. An option 'Submit Idea Anonymously'  will be visible in idea submission form. 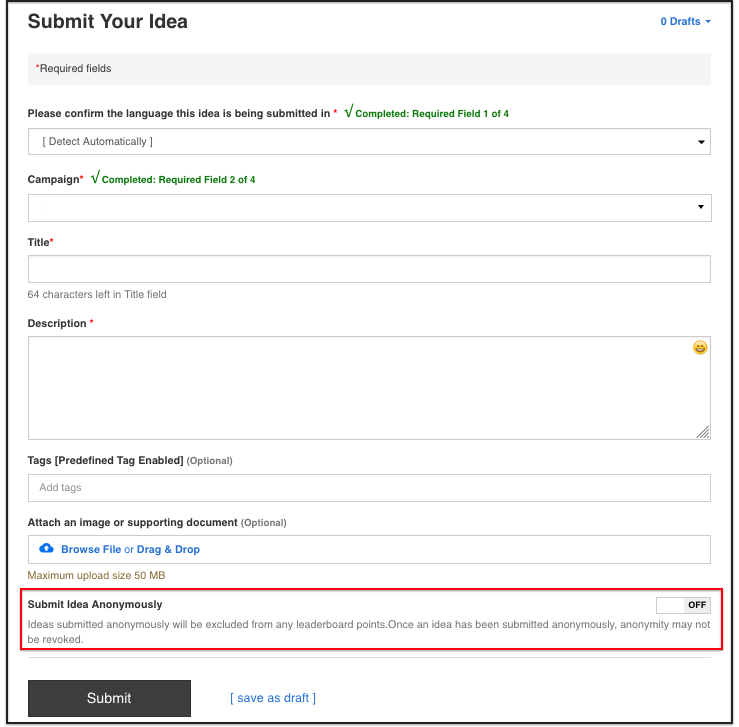 3. Idea Anonymous by Default: Enabling the switch 'Allow Anonymous Idea Submission' open up an option to enable all the ideas submitted in the private campaign to remain anonymous by default. NOTE: User can still turn OFF the 'Submit Idea Anonymously' option on idea submission form and submit idea.

4. Allow Anonymous Commenting: This feature enables the users to submit comment anonymously in the specific campaign while in rest of the community user name will still appear. 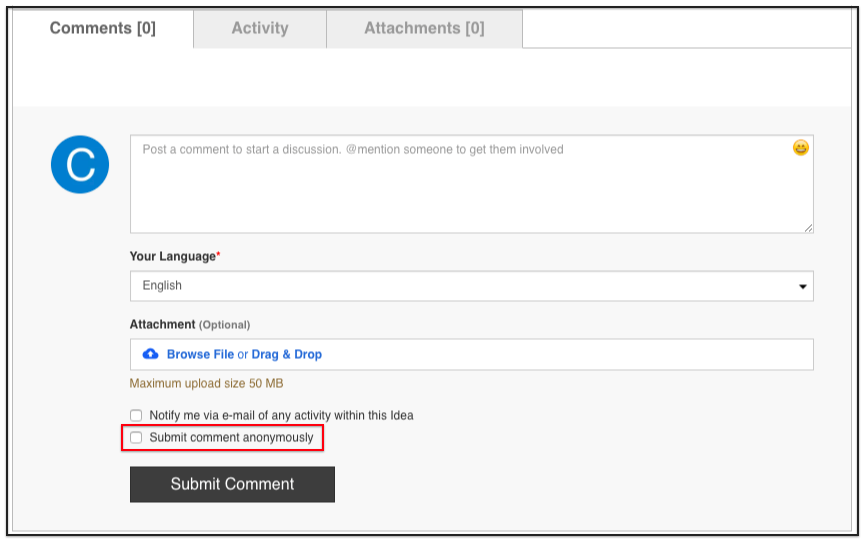 5. Comment Anonymous by Default: Enabling the switch 'Allow Anonymous Comment Submission' open up an option to enable all the ideas submitted in the private campaign to remain anonymous by default. NOTE: User can still turn OFF the 'Submit comment anonymously' option under the comment section.

7. IP based Access Restriction: Access restriction based on IP address can be set for a specific campaign using this section. For community level IP based access restriction see article:  https://support.ideascale.com/setup/ip-based-access-restriction

8. Allow submissions to be 'private', only viewable to admins, moderators, and authorized groups: This feature actually allows the user to submit idea privately. These ideas are are accounted in the 'Campaign activity' section though it is not visible to normal/standard users. It can only be viewed by the submitter, co-submitters, moderators, admins and authorized groups.

9.Force submissions to be 'private', only viewable to admins, moderators, and authorized groups: This feature actually forces private submissions, because it does not give the idea authors a choice to elect to submit privately or publicly. It just makes all submissions to the campaign private by default. Normal/standard users cannot view these ideas. It can only be viewed by the submitter, co-submitters, moderators, admins and authorized groups. 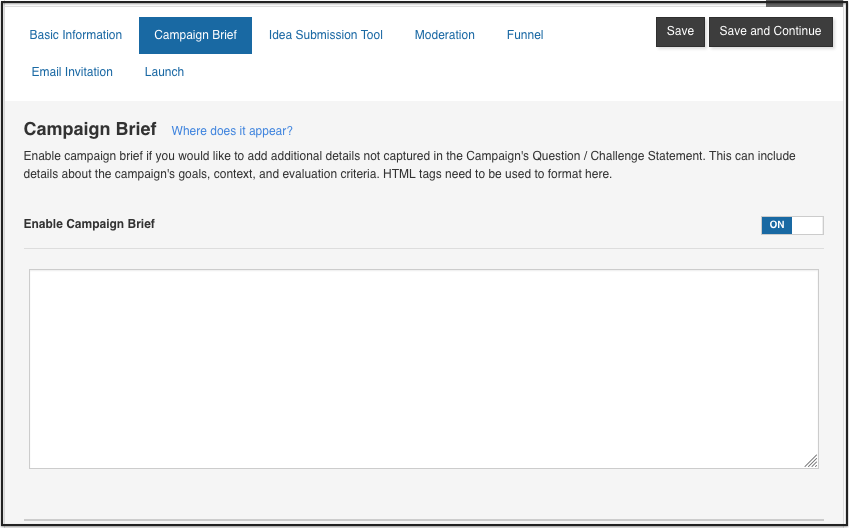 a. Campaign Brief
This section allows you to write a detail description with could not be mentioned in the Question / Challenge statement. This can have information about the campaigns mission, goal, context and evaluation criteria. 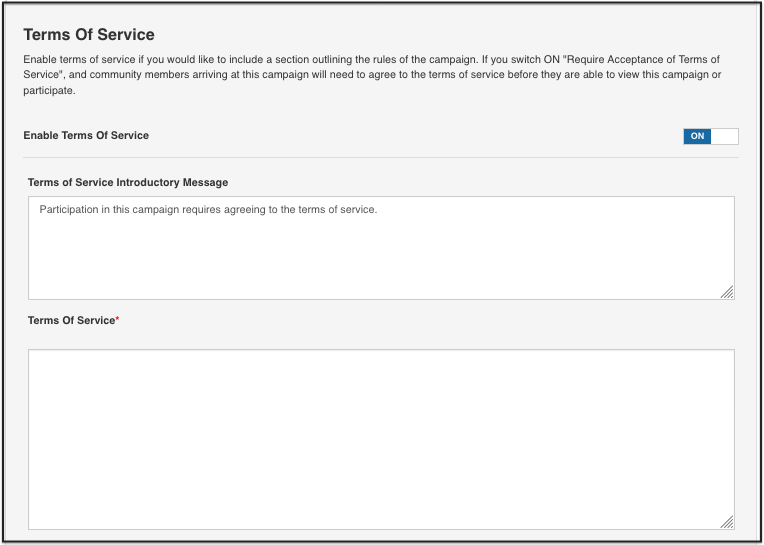 This section allows you to write down your set of rules for the campaign. Only after agreeing to the Terms of Service will the members be able to view and participate in the campaign. 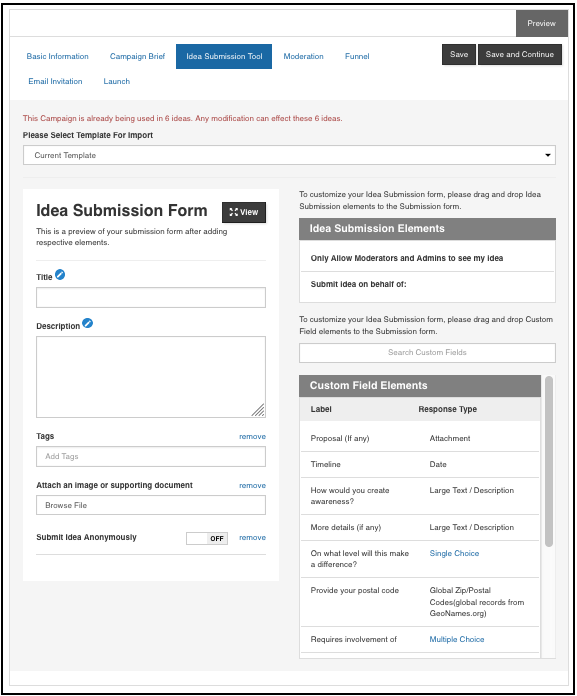 The idea submission tool consists of three sections one being the Idea Submission Form preview, Idea Submission Elements and Custom Field Elements. This is a gist of all the elements that goes into the form while submitting an idea. We have developed this tool in a very easy drag and drop manner for your convenience and fast amendments in the campaign in terms of these elements. This gives a feasibility to arrange all the questions on the form as per your requirement by simply dragging and rearranging it to the order you would want it to appear.

a. Template for Import
Administrator can create a fresh template or import the exact template i.e. all the settings and custom fields needed in the campaign's idea submission form from another campaign within the community.

You can edit the text Title and Description for each campaign separately from here. Simply click on the Pen icon to get a field to enter text. Click on OK button once done. 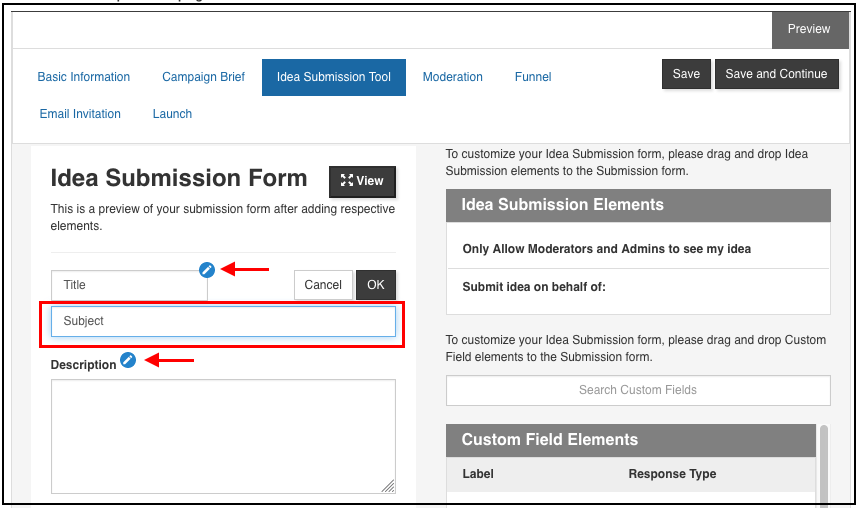 Click here to know how to add, edit or delete a custom field 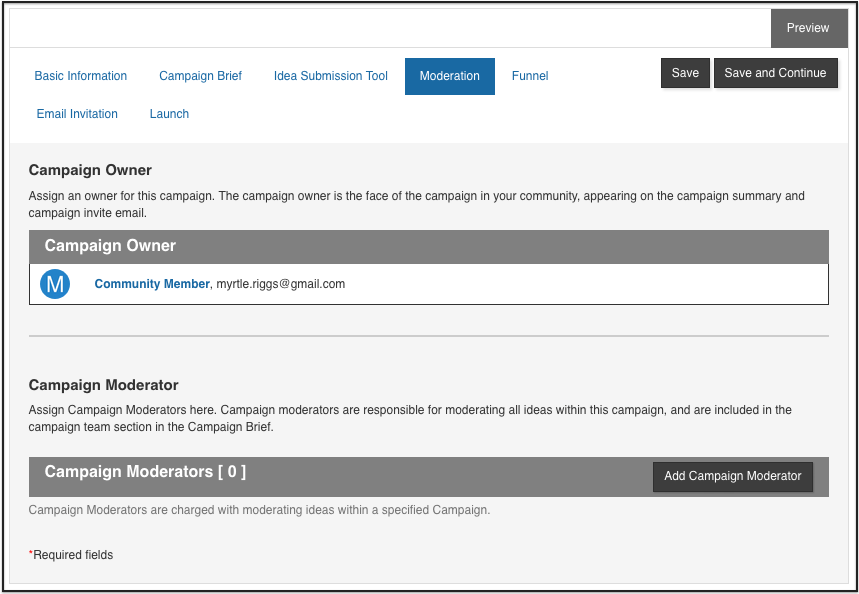 a. Campaign Owner:
The assigned campaign owner will be face of the campaign bearing his name on all the campaign invite and campaign summary. However they would not able to edit or manage the campaign unless they are also an administrator in the community.

b. Campaign Moderator:
As the word clearly states moderation of the campaign can be assigned to 'Campaign Moderators' who would be responsible for moderating all ideas within this campaign. 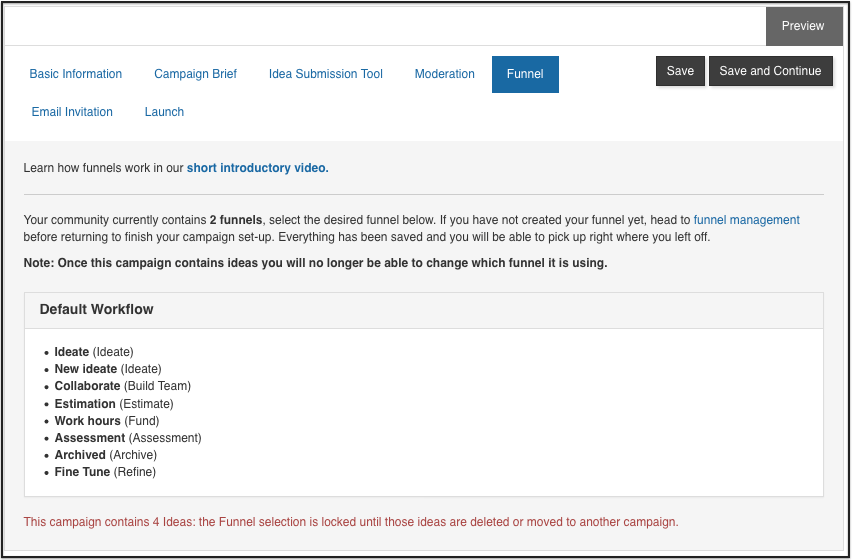 Funnels are nothing but stages from which each idea goes through during the process of getting the best idea to the last stage. Funnels need to be set up in Workflow >> Funnel Management. The community comes along with a default funnel in which you have few stages. While setting up the campaign you could opt for the funnel of your choice. Once an idea is submitted to the campaign the funnel cannot be changed or altered. To know more about funnel see: https://intercom.help/ideascale/en/articles/682913-configuring-funnels 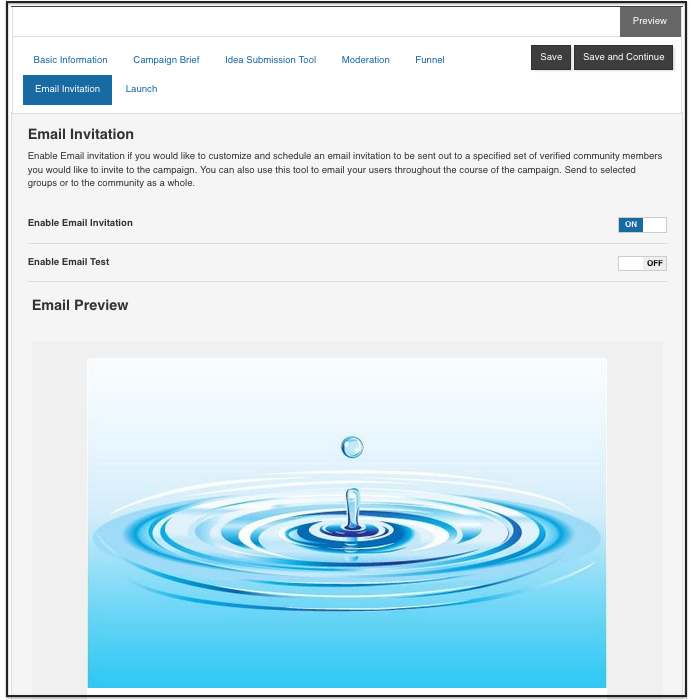 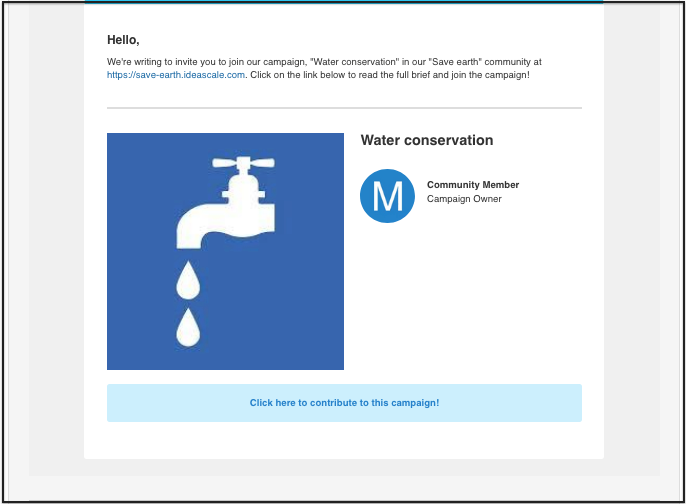 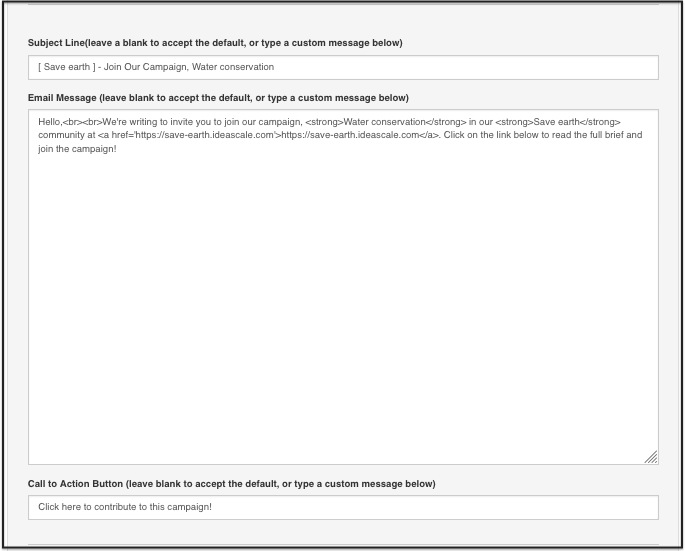 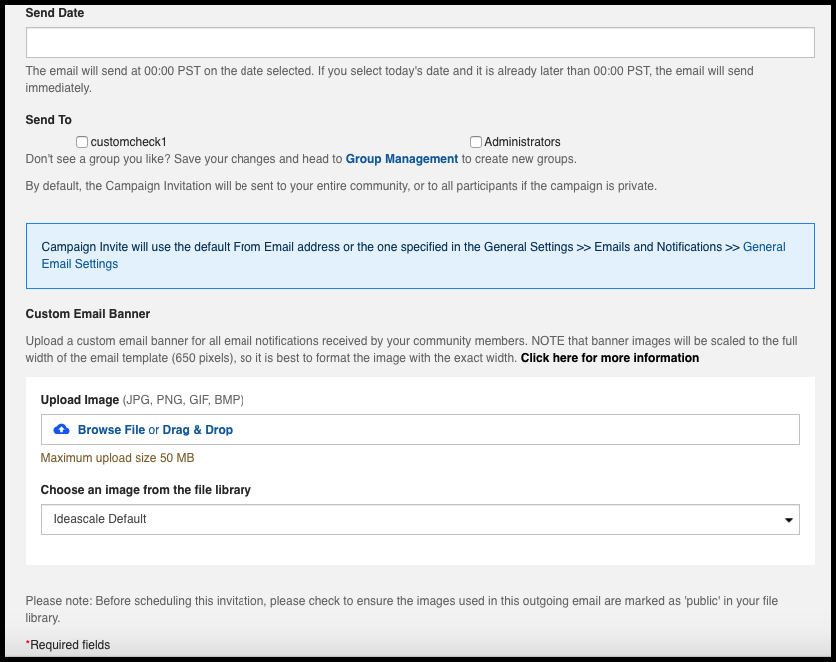 Email Invitation is sending a personalized invitation for the specific campaign inviting users to participate. This email contains the campaign banner, logo, subject and a body of the email giving details of the campaign.

a. Enable Email Test: This allows you send a test email to any one recipient to see how the Campaign Invite Email looks like.

b. Email Preview: This give us a clear picture of how our email invitation will actually look when it is sent to the users.

c. Subject Line: This section allows you to customize the subject of the email.
d. Email Message: This space can be utilized to pen down a message or an invitation inviting your list of users to participate in the campaign.
e. Call to action Button: Customize this button to something catchy so the users are ready to get started with their ideas in the campaign.
f. Send Date: We can schedule the send date and the invitation will be sent at 00.00 PST on the date selected. In case its is todays date date and is past 00.00 PST the email will be sent immediately.

g. Send to: We can opt for the email to be sent to all community members, specific group in the community or if the campaign is private then only to the members of the specific campaign.

h. Custom Email Banner: The email invitation can be customized along with the email banner related to the campaign.

Please Note:  i) The Campaign Invitations will be sent out to members whose email status is verified. ii) Campaign invite can be sent only once for each campaign on a particular day. iii) Campaign Invite will use the default From Email address or the one specified in the General Settings >> Emails and Notifications >> General Email Settings. 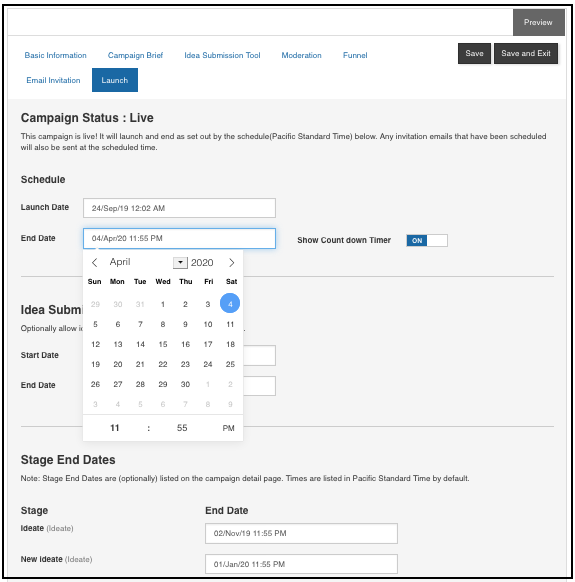 b. End date
After a Campaign concludes (post end date), they get archived and are moved to 'Archived Campaigns' by the system where they are available for viewing to community users but is closed for any activity like voting, commenting etc.

Idea Submission Status: This allows the administrator of the community to set a start and end date for idea submissions in the specific campaign. After the end date any new idea submission will not be submitted.

Enabling or Disabling a Campaign: Campaign settings do not have an enable button, however we could always use the 'Save as Draft' switch while creating a campaign in the Launch section to stop it from reflecting in the homepage to the normal users.

In case the campaign has not launched and admin do not want the campaign to be visible to users simply set a future date as the Launch date which will automatically remove the campaign from the homepage.

c. Show Count down Timer
When admin set an end date for a campaign, users see another option to 'Show countdown timer'. The timer shows up on the campaign page to remind users about the time left for participating in the campaign.

d. Stage End Dates
The latest feature in Campaign is an end date for each stage in the campaign. This will stop the members from any participation like voting and comments in that particular stage after the end date specified.

This will reflect as a Timeline in the campaign details section.
Note: Expired as well as archived stage's chevron will appear grey.