All Collections
Giving kudos
How do points work?

How do points work?

An in-depth breakdown on the points system

The point of points

Disco makes it easy to appreciate teammates in a social setting. Giving appreciation involves the giver and the receiver/s. If we left it at that, everyone else in the channel would be left out. By having the ability of adding points, participants can join in on the celebration.

In addition to acting as an upvote to appreciation, points also act as a reputation for Disco users. As mentioned above, using Disco involves giving appreciation or receiving it. As such, you can earn reputation both as a giver and as a receiver.

Teammates can add points to appreciation by adding reactions, replying with a card, or adding a GIF reply. Here's a quick illustration of doing all three of those things:

Points in the dashboard

The dashboard allows you to breakdown who is giving and receiving appreciation with a variety of ways to filter the data. Also, you can view stars with the most points to find the biggest wins on your team. Check it out:

You can view both the Giver points and Receiver points for someone on their profile. Each count represents their total point values for both point types. Check it out: 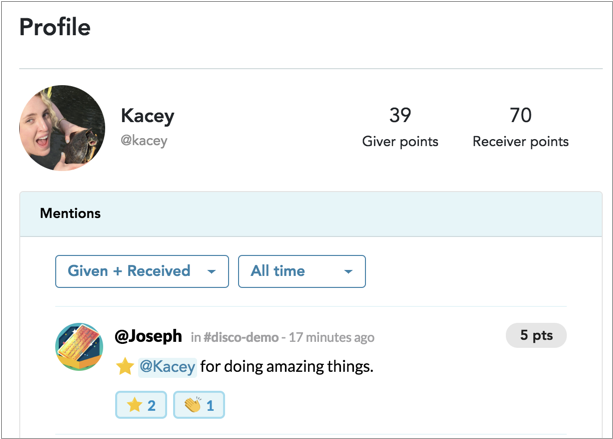 Kacey has 70 receiver points, a total of 70 reactions, replies, and gifs have been added to appreciation Kacey has received.

Kacey has 39 giver points, a total of 39 reactions, replies, and gifs have been added to appreciation Kacey has given.

Here's a helpful diagram to illustrate how points work:

In September 2018, we decided to revise our points system. Previous to this change, giving appreciation and up-voting appreciation were both considered giving "stars". Using a single name for both the points and the action made it confusing to decipher the two. We're hoping this change makes it dead simple. Let us know if you have feedback!