All Collections
Explorer UI How To Guides
What are Funnels? A guide from the basics of creating one to advanced usage

What are Funnels? A guide from the basics of creating one to advanced usage

Written by Aaron Ballensky
Updated over a week ago

Funnels are a powerful tool for understanding user-behavior flows and drop-off rates, it shows the flow of events a user performs on their way to reaching a goal. This flow could be a checkout process, registration, or lead conversion. When analyzing a funnel, you are concerned with the number of users that successfully make it to the next step, as well as the number of users that drop off. This will show you where your flow loses the most users, so you know where to focus your attention. The result from a funnel is a list of counts for each of the steps you specify. For example, your funnel could have these steps:

A funnel analysis with those steps would work like this:

You can add as many filters as you’d like to make your funnel more targeted.

Fig 1: Get the count of a specific subset: add a filter.

Fig 2: Here’s an example funnel (query on the left, resulting user counts on the right) 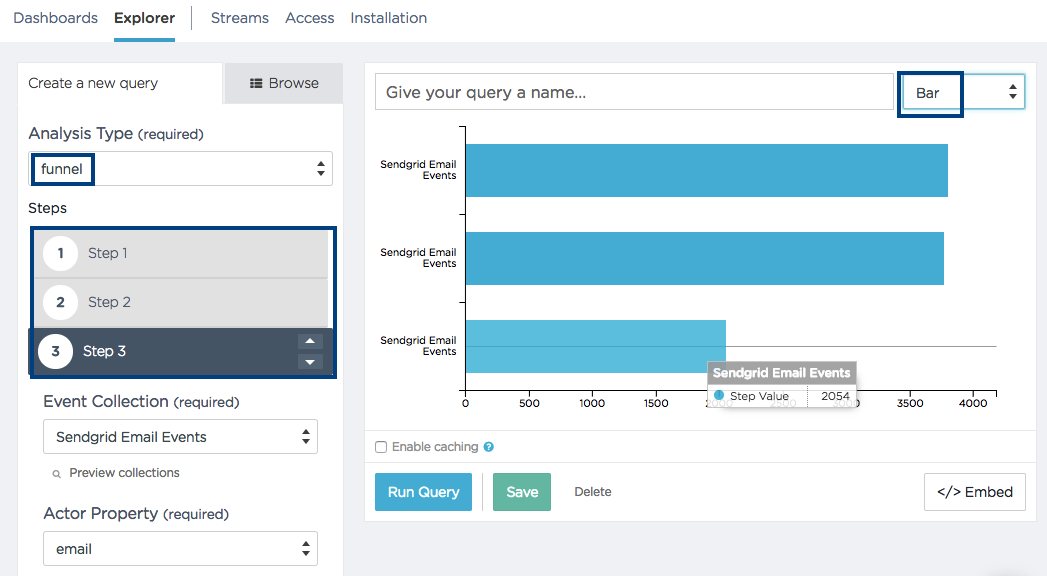 We’ve added the ability to get the ‘actors’ from any step in a funnel, which will enable you to see who performed each step.

You’ll notice that for each step in the original example, the funnel returns a count of unique actors. If we wanted to see an actual list of those specific users who had completed a step — say, all the users who had created content in step 2, use "With Actors".

In our tutorial funnel example, we'd be able to return of list of who was able to complete the tutorial (step 1), and further who (aka the actors) who were able to go on to create content (step 2).

To use this feature:

Fig 3: Check the "With Actors" box

You might be wondering what the other two check boxes here do. So we'll explain them here too.

What if we’re interested specifically about those who dropped off from our tutorial? (aka find out how many people failed to complete our tutorial.) This is where Inverted steps come in. If check the "Inverted Step" box we will exclude events that match that step.

In our tutorial example, if we invert Step 2 for creating content after successfully completing the tutorial Step 1, we will return a count for everyone who completed the tutorial but didn't create content.

In our original funnel example about the tutorial, any actor counted in step 3 must have been in step 2 as well. Well, imagine now if we wanted to know which users have created content  OR shared content.

Here’s where optional comes in. If we check the "Option Step" box in Step 2 it won’t affect the data in future steps, so we can expect Step 3 to now return all of the users who viewed content whether they had created content or not.