Written by Cait Watson
Updated over a week ago

You may be wondering if you've got what it takes to build a Nobex Partners app. Of course you do!

We are able to work with many different stream types and formats. We support multiple streams per station. Our apps will use the most appropriate stream per platform.


Audio Stream Types Supported by Nobex
There are three things which make up an audio stream type:

Transport Mechanism
Standard HTTP is the recommended transport mechanism as it is supported on all platforms. Shoutcast servers use a variant of HTTP (referred to as ICY HTTP in the table below). This mechanism is occasionally not supported by some carriers as certain proxy servers block this. Another variant of the HTTP protocol is Windows Media HTTP Streaming Protocol (WMSP) used by Microsoft Media servers. Most WMA/ASF streams are delivered via this protocol. This is currently not supported on BlackBerry 10 nor on iPhone. Finally, the HTTP Live Streaming (HLS) protocol is only supported on BlackBerry 10 and iPhone. The following table summarizes what is supported on each platform: 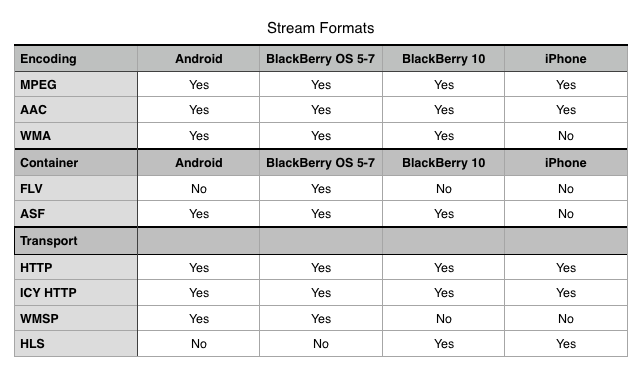