THREATENS RELIGIOUS LIBERTY
The misnamed "Equality Act," is a federal bill that would affect every man, woman, and child in America. It adds "sexual orientation" and "gender identity" as new legally protected classifications to federal civil rights laws, resulting in significant harm to some of the most vulnerable among us, superseding the religious freedom of Christians and other people of faith.

BIBLICAL MARRIAGE
The biblical view of marriage, as between one man and one woman, would be described in federal law as discriminatory. SEC. 2

ACCOMMODATE SAME-SEX
Churches could be forced to accommodate same-sex ceremonies and open restrooms to men who assert a female identity. SEC. 1101(b)(2)

CHURCHES FORBIDDEN
Churches would be forbidden from ensuring that their staff abide by their doctrines and beliefs about marriage, sexual behavior, and the distinctions between the sexes. SEC. 2

PUBLIC SCHOOLS
Public and private schools throughout the country could be required to teach about the LGBT lifestyle and sexual activities. SEC. 2(3)(8)(o)

GENDERLESS RESTROOM
A nationwide genderless restroom policy would be enforced opening the door to male sexual predators who could abuse the law. SEC. 1101(b)(2) 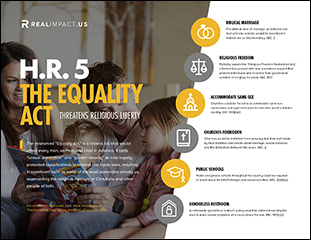 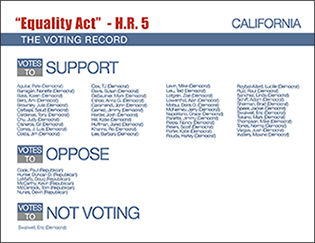