All Collections
Groups & Reporting
What is a Static Group and how do I use one?

What is a Static Group and how do I use one?

Written by Support
Updated over a week ago

Static Groups are a fixed collection of individuals, organisations or deals. Use these for the occasion that you would like to keep them in one place as a fixed point of reference. This could be a calling list, emailing list, a report or a forecast - the possibilities are endless.

There are a number of ways you can add records into a static group.

To create a static group, go to the record type that you would like (individuals, organisation or deals) and then click on "+ New Group". 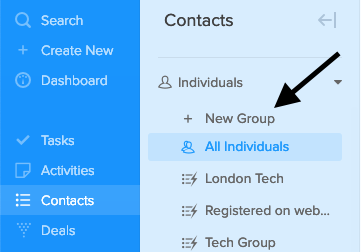 Once you have the group there are a few ways that you can add records to it:

Manually adding them one by one.

To do this click on the 'Add' button on the right of the screen. From here you can add individuals one-by-one.

Add records by saving a Smart Group as a Static Group

Add them with an Automation

To do this you will need to create a smart group with filter parameters configured so that the individuals you wish to join are included (as above), now rather than saving them as a fixed group you can have individuals who match the criteria in the future be added to the static group.

Add them with a Data-Import

Say you buy a list of contacts that you wish to import and you wish to include these into a group. When importing them you have the option to include a 'group' column. When mapping this, it will bring everyone who has a group name added to that column into a group with that name (The system will create a group if it doesn't already exist) this will then show on the record in the 'group section' and in the 'groups column' in the contacts or deals.