All Collections
Indicators
What Is
About - ABC Waves

Written by Duncan Boggs
Updated over a week ago

Visualize the overall strength and direction of a given market across multiple time frames.

In the below screenshot, the separate A, B and C Waves are on the chart with the TTM Wave study.

The TTM Wave is a combined A and C wave that is included in the TOS platform. 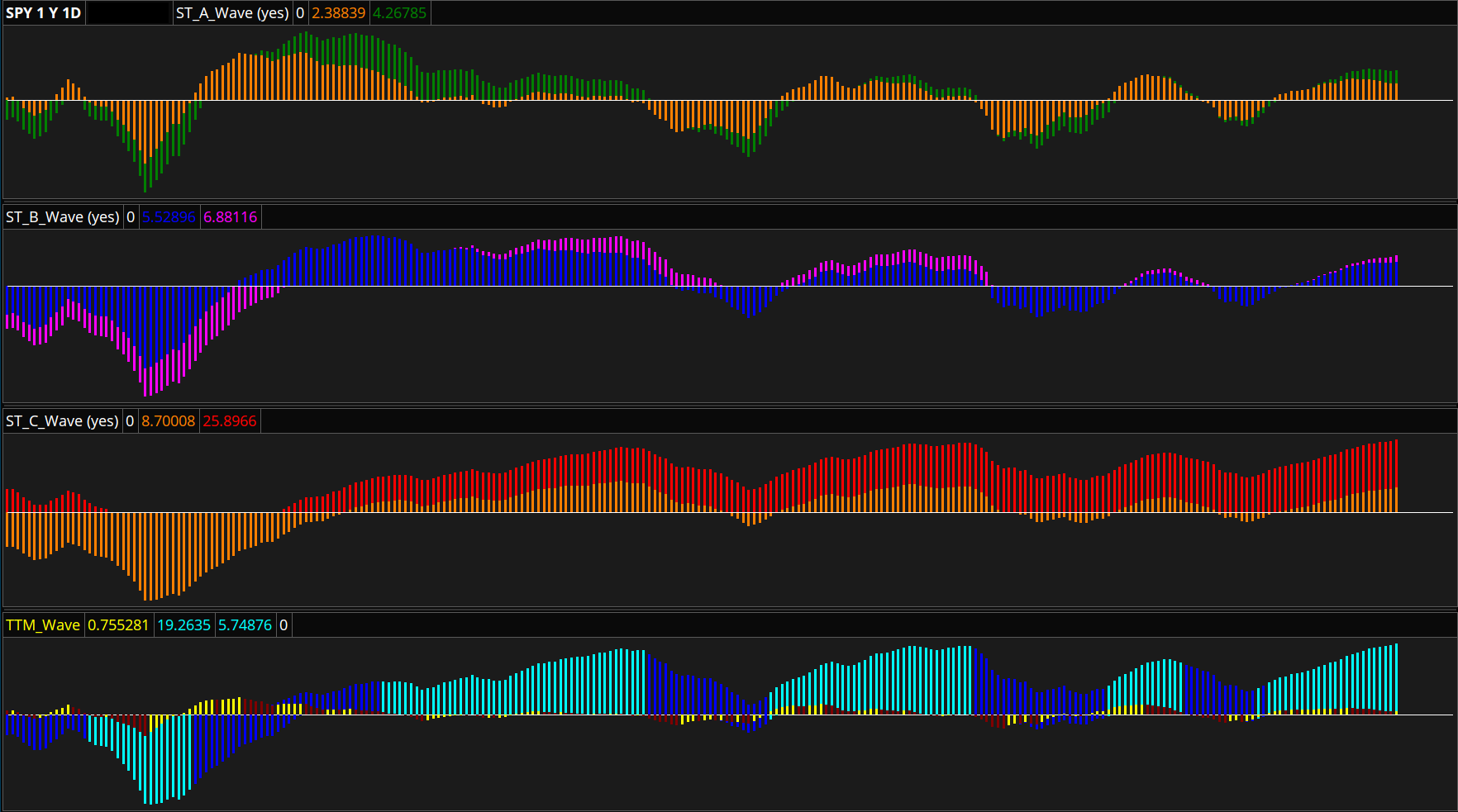 The TTM ABC Waves were built by a third party developer from an algorithm comprised of various moving averages and oscillators.

Within each wave is also a smaller and larger wave differentiated by color. These move in unison for the most part, but one is slightly shorter term than the other. In the image below, the corresponding orange, blue and orange waves are mildly shorter term than their respective green, magenta, and red counterparts. Many traders do not focus on the intra-wave color differences and choose to focus on the overall wave structure instead, but a strategy for using the separate components is outlined in the next section.

The chart below is an example of an ideal setup using the waves. Notice that all three waves, representing three different time frames, all cross the zero line and go positive just after the cash market session opens. The waves will not always cross at the same time but when they do, this is often viewed as a stronger signal. 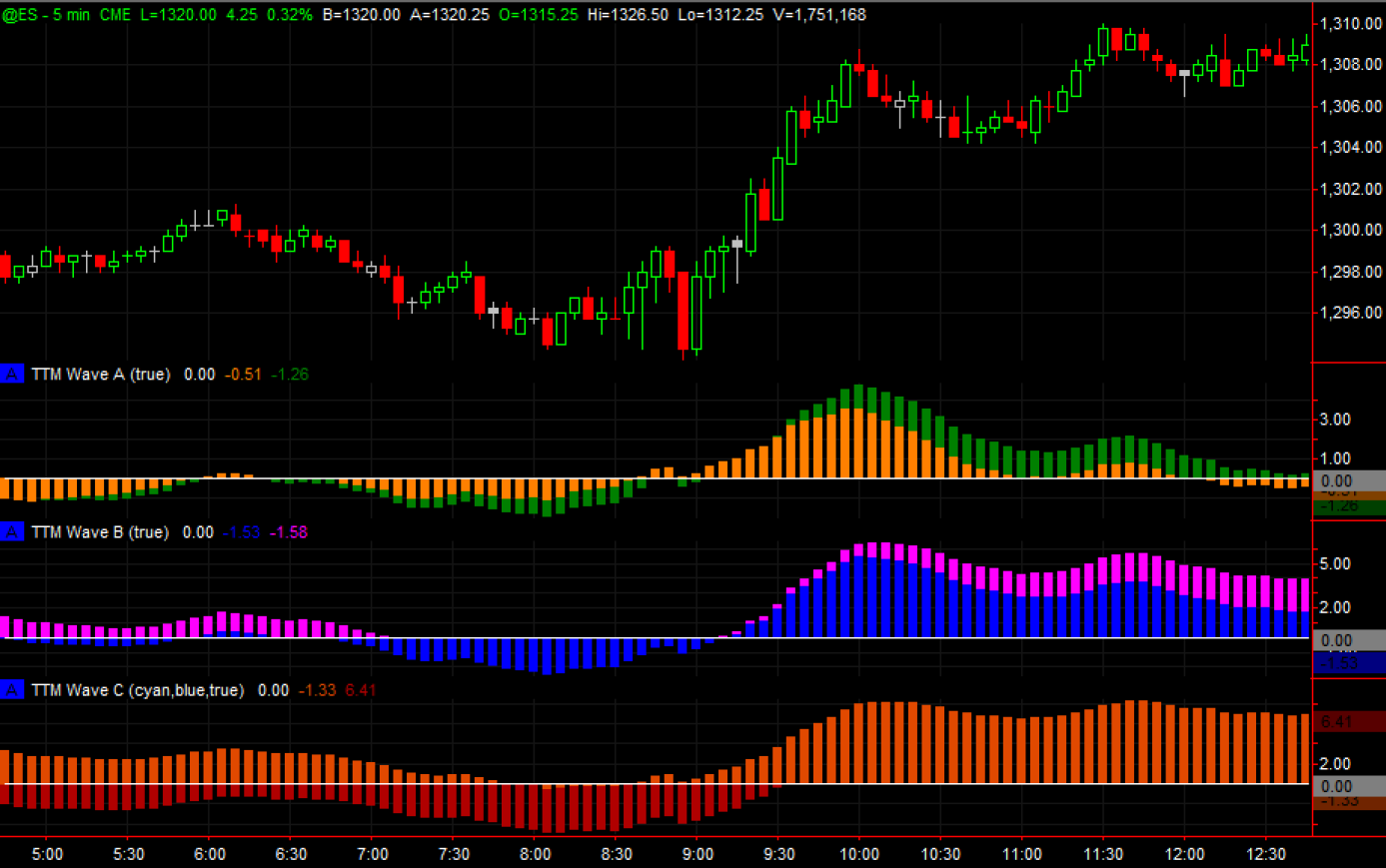 For intraday entries, the shorter term A Wave is commonly used as an entry signal. Once the wave crosses above or below the zero line, this can be used as an entry signal in the corresponding direction. For the highest probability setups, we like to see the B and C Waves on the same side of the zero line. For example, if the A Wave crosses zero going from negative to positive, we would avoid taking a long entry if the B and C Waves were negative and therefore not in agreement in regard to market trend.

The C Wave is often viewed as the “anchor” for the market. If this wave is clearly positive with all bars above the zero line, we would avoid short trades as this is an indication that the overall momentum of the market is long. The opposite would also be true if the wave was clearly negative.

We mentioned using the two components of a wave for entry and exit signals. A popular strategy is to use the smaller wave for your entry signal and the larger one for the exit. In the image below, let’s look at A Wave (orange and green wave on top) for our intraday trade signals.

The entry signal was a clear long. We had the A Wave crossing the zero line with corresponding action from the longer term B and C Waves. The smaller A Wave component (orange) crossing above zero would be the entry signal. For the exit we would wait for the larger wave component (green) to cross back below the zero line signifying that short term momentum has been lost. 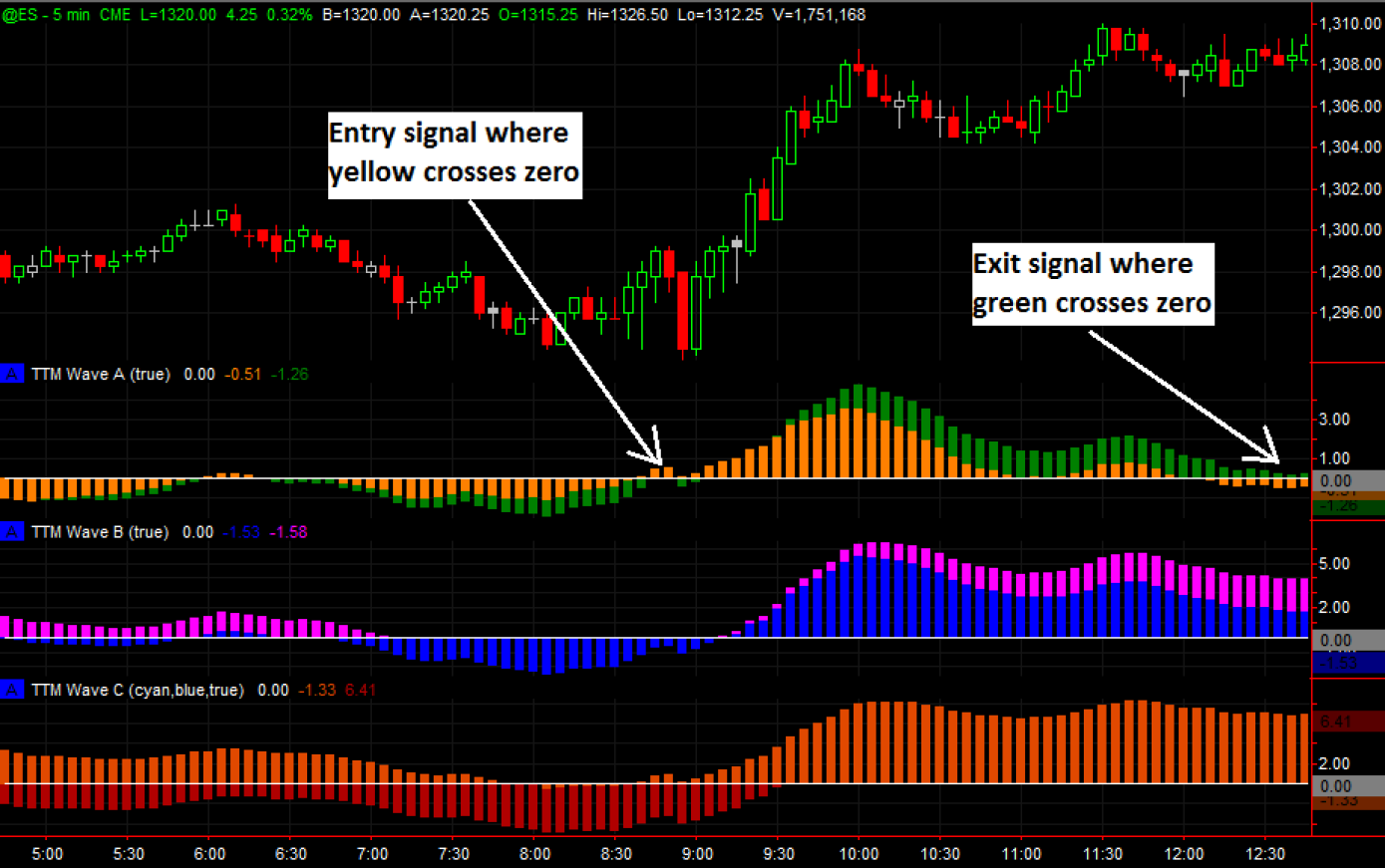 The waves also work nicely as a confirmation for the TTM Squeeze indicator. When a squeeze fires, we want to see that the A, B and C Waves are in agreement with the direction of the signal. If a squeeze fires short but the waves are clearly positive and showing bullish momentum, we may opt not to take the signal since it would be fighting the overall market trend.