All Collections
Indicators
What Is
About - Ready Aim Fire Pro

Written by Duncan Boggs
Updated over a week ago

What is RAF Pro?

Ready.Aim.Fire! is a trigger indicator designed as a signal one can use to enter a trade.

Ready and Aim dotted lines and shaded areas for sells and buys.

Thrust dots for when a strong trend might be starting or continuing. 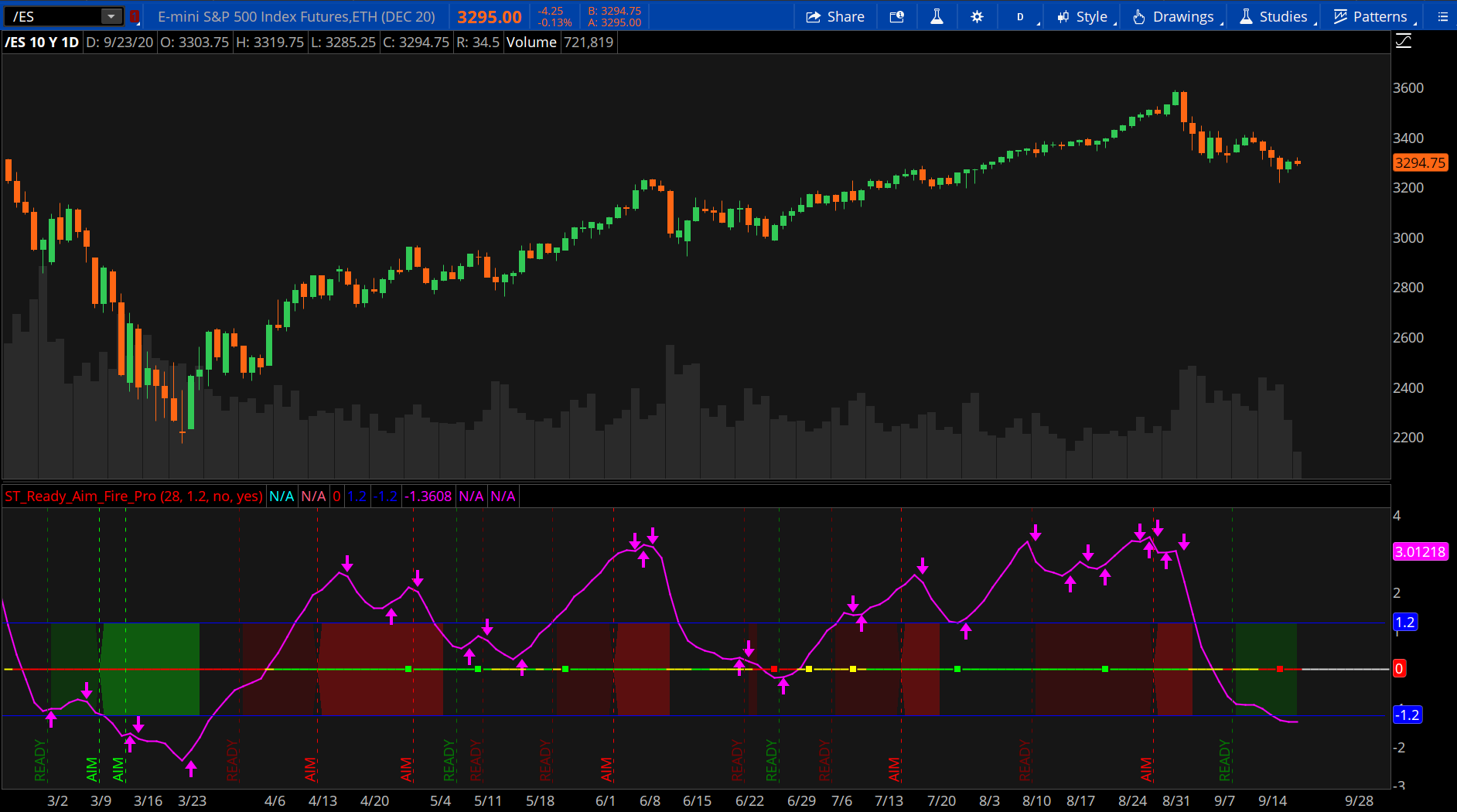 A trigger indicator is an important tool in a trader’s tool bag but just as a saw isn’t meant to be the one tool used to build a house. Ready.Aim.Fire! Pro is not designed as the sole tool to enter a trade. Rather, it is meant to be used in combination with other tools which identify potential setups, then Ready.Aim.Fire! Pro can be used to signal the entry.

The intent of the Pro version is to add triggers for initiating/resuming a trend to supplement the reversal signals of the original RAF.

RAF can be a good compliment to The Squeeze by identifying when a squeeze might be ending and a trend phase is resuming as well as helping to identify the direction of the move. Sometimes it is redundant, merely confirming information available from The Squeeze firing and/or The Squeeze momentum. Other times it may fire sooner giving additional useful information. 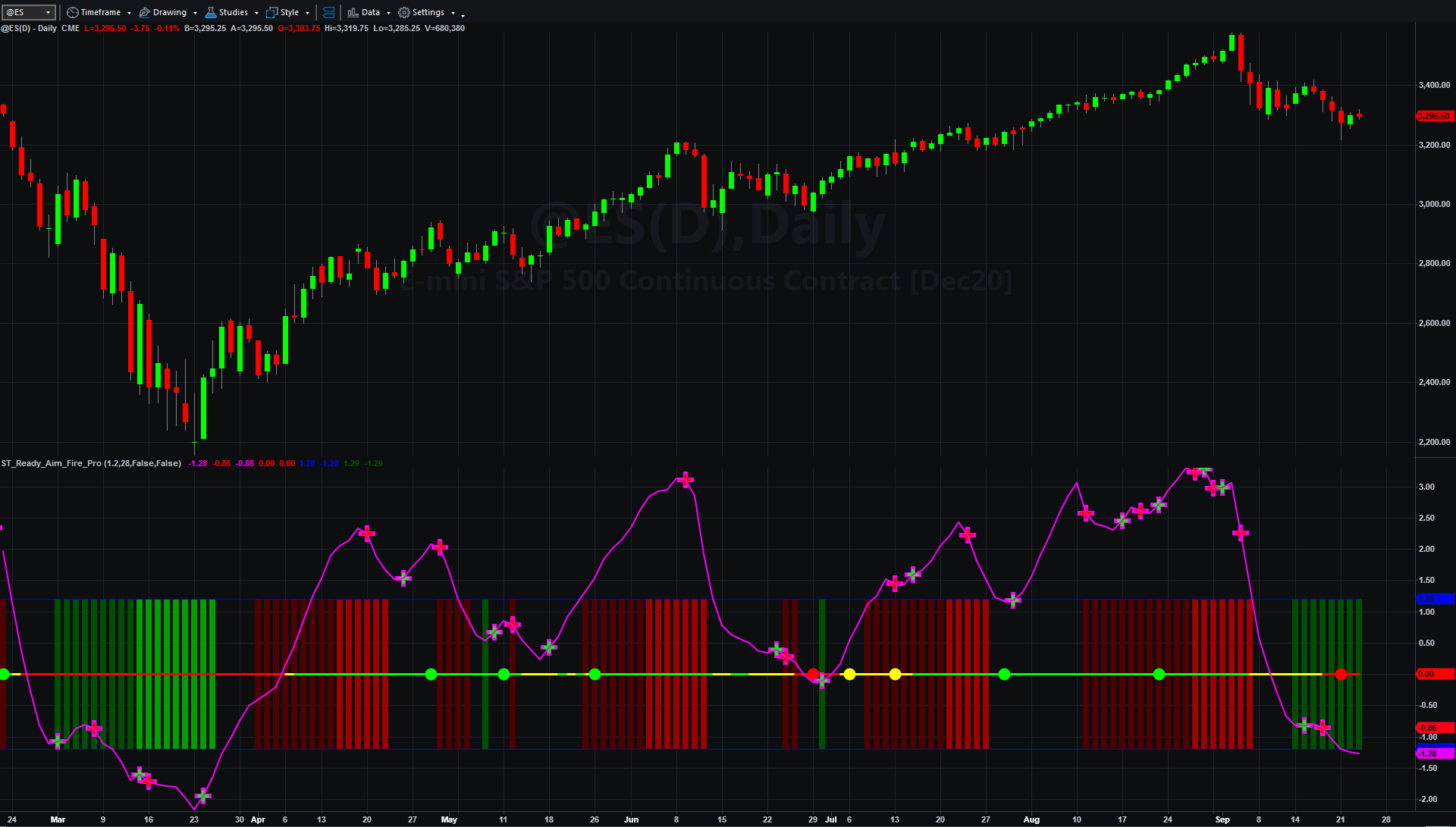 Pro Thrust dots appear when there are technical indications that a strong trend might be starting or continuing. The RAF Pro Thrust dots add an additional confirmation/trigger.

A green dot, favors an uptrend, when there’s a red dot, that favors a downtrend. When the center line is yellow, the trend is unclear and one should look for additional directional clues.

• Red Pro Thrust: Clue that any thrust may head lower.

• Green Pro Thrust: Clue that any thrust may head higher.

• A yellow Pro Thrust: Trend may be starting or intensifying but does not suggest direction and therefore requires the use of other clues for direction.

Center Line Pro Trend is for confirmation when looking to buy or sell with Pro Thrust signals. The color of the center line can be used as one of several clues to the direction of a trend.

The heart of Ready.Aim.Fire! Pro’s turning point triggers is an oscillator represented by a magenta line. The magenta buy and sell arrows are the “Fire” in Ready.Aim.Fire!

The RAF Pro does away with confusing multiple oscillators. What makes this oscillator special is a mathematical transformation which works like a focus internally, giving crispness and clarity for price movement when the oscillator is near extremes.

Another tendency is that the trend is often in the direction of the most recent RAF magenta arrow. Add to that the transition of the Squeeze histogram or an interaction with a Voodoo Fireline and you have bullish or bearish implications.

The cleanest signals are ones which occur when exiting a Squeeze, with an RAF Pro thrust and where the Squeeze histogram, RAF Pro trend color, and most recent RAF magenta arrow agree.

RAF Pro arrows may be decent trend continuation spots, esp. when entering on a Squeeze, but it does help identify spots to join a trend when a Pro Thrust from a Squeeze remains ongoing. 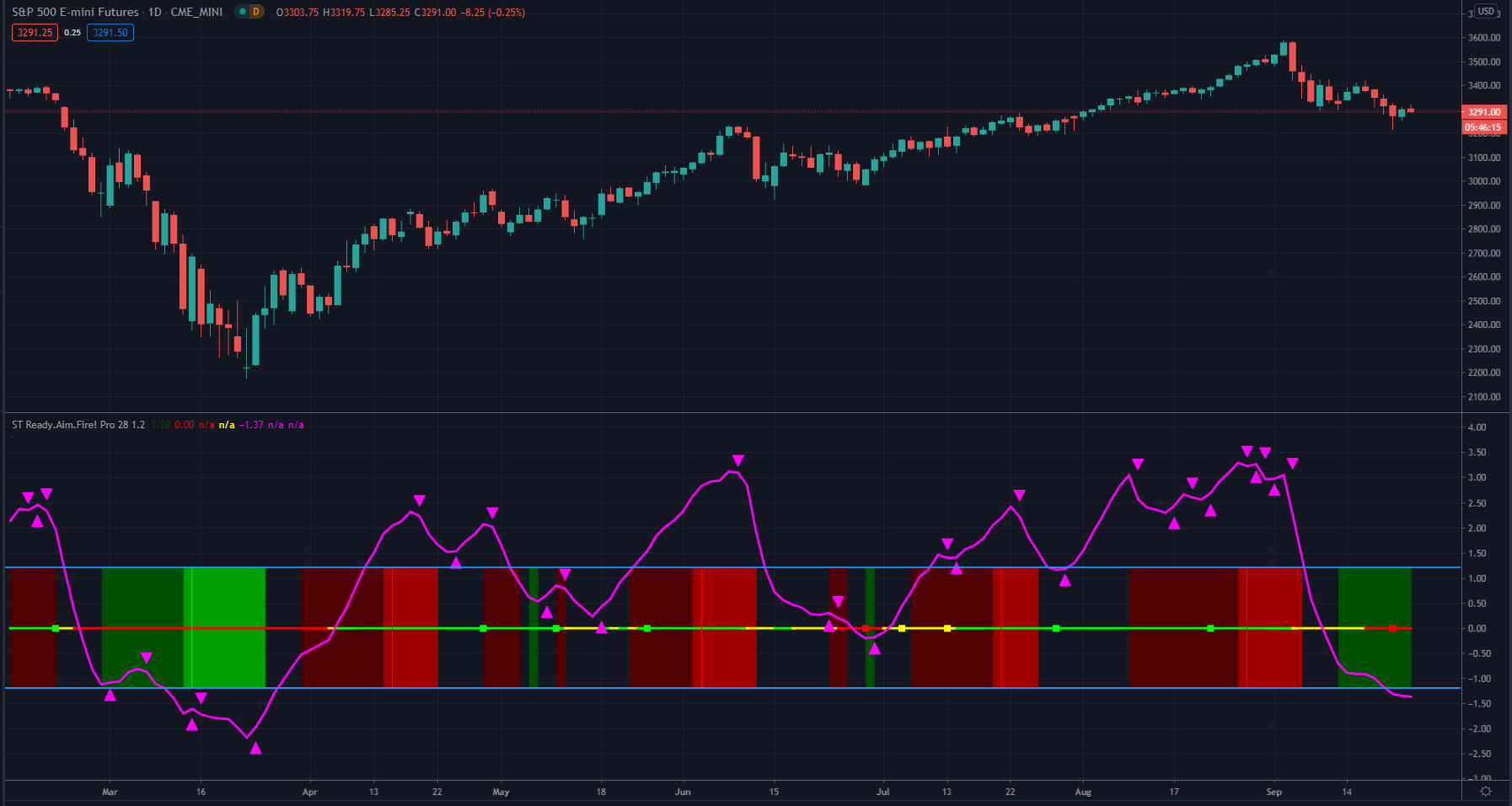 The Ready and Aim conditions are the areas between overbought and oversold that turn a dark shade of green or red for a Ready signal and then a brighter shade for an Aim condition. The Aim signal is accompanied by a thin vertical line which also makes it possible to identify additional aim signals.