Written by Soma Technologies
Updated over a week ago 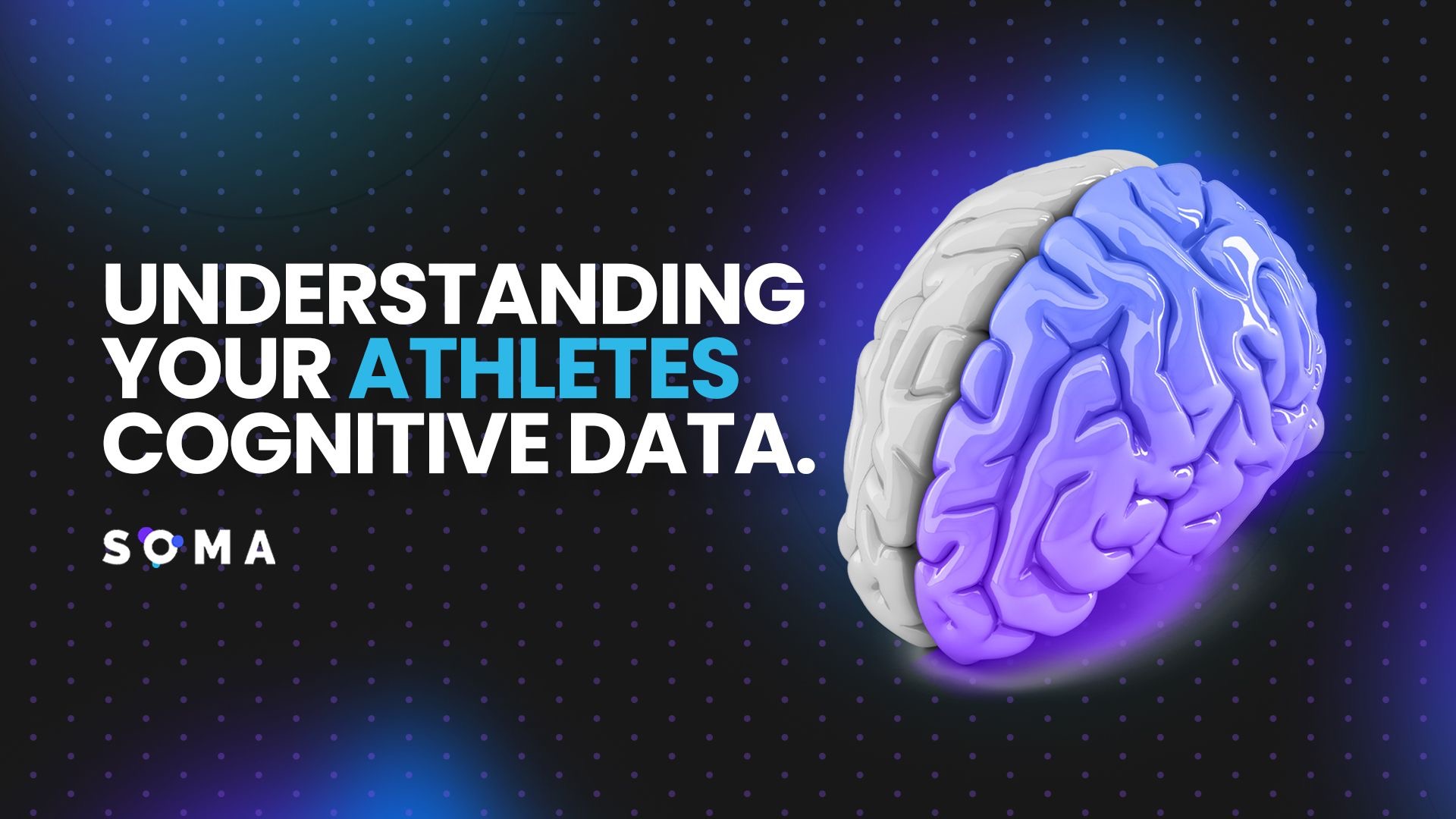 In this article, we cover each measure that Soma NPT monitors in order to demonstrate the importance of looking at more than one measure when analyzing cognitive data.

We will cover the following measures.

The most well-known cognitive measure is reaction time. While this is a vital measure, it may not fully capture whether an athlete has improved their cognitive performance. This is because reaction time can be highly variable.

This example nicely shows that reaction time can be highly variable and even though both athletes have the same average reaction time it is clear that Athlete A performs more consistently than Athlete B. 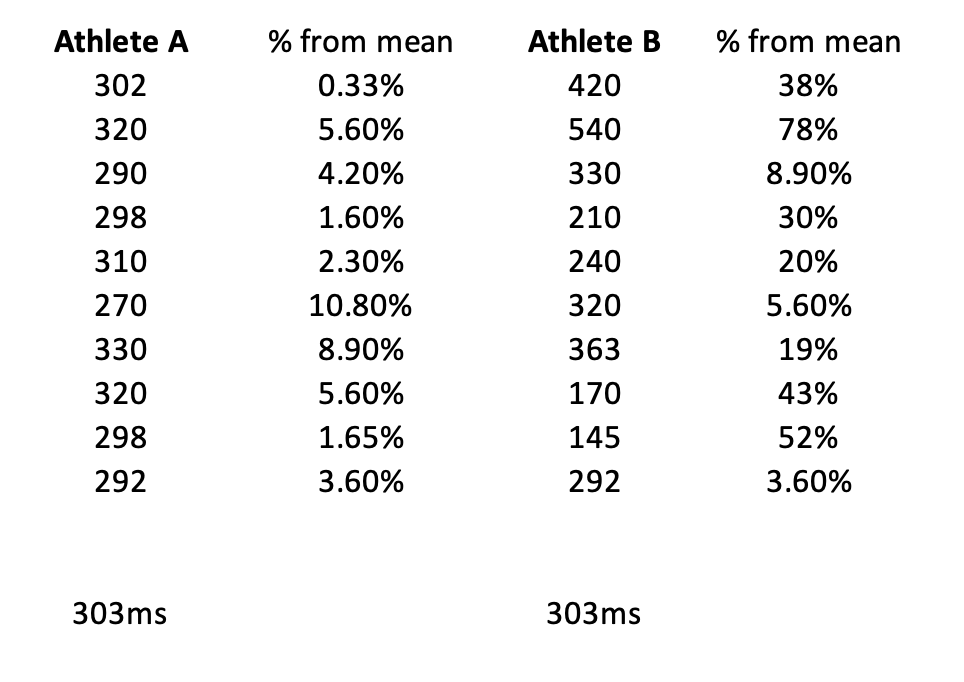 Having deeper insights into an athlete's cognitive performance is important. This is why Soma Analytics gives coaches the ability to display trends of all cognitive measures with Minute on Minute (MoM) breakdowns in addition to the overall grand mean data for each cognitive task. By doing so, it enables coaches to see the mean data for the given task and also how variable an athlete is performing every minute of their cognitive training. In the examples below you can see the grand mean and MoM trend data of the athlete's reaction times over a 20-min task. You will notice one athlete is extremely variable from minute to minute and the other athlete is very consistent over the entire 20-min task. 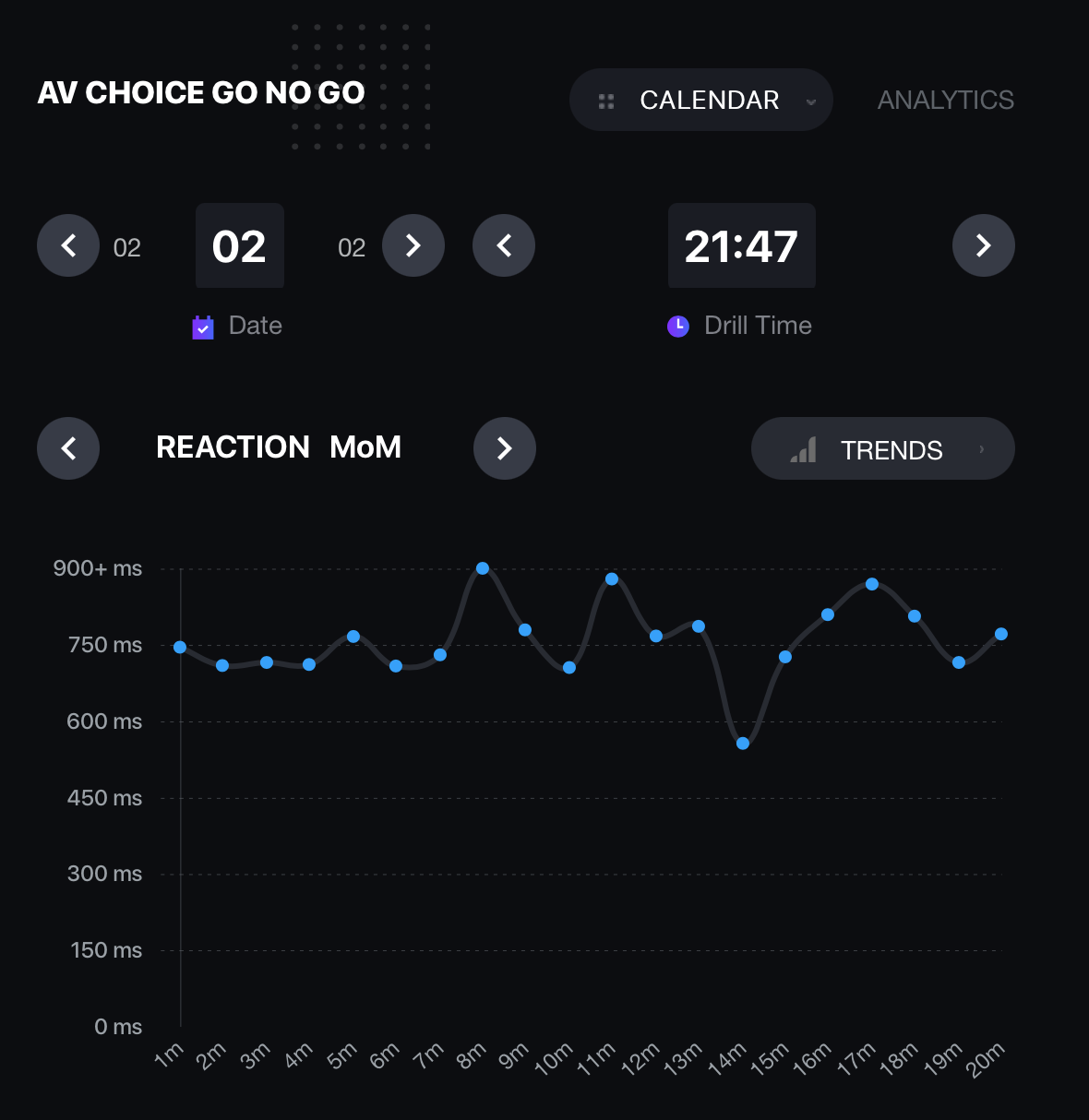 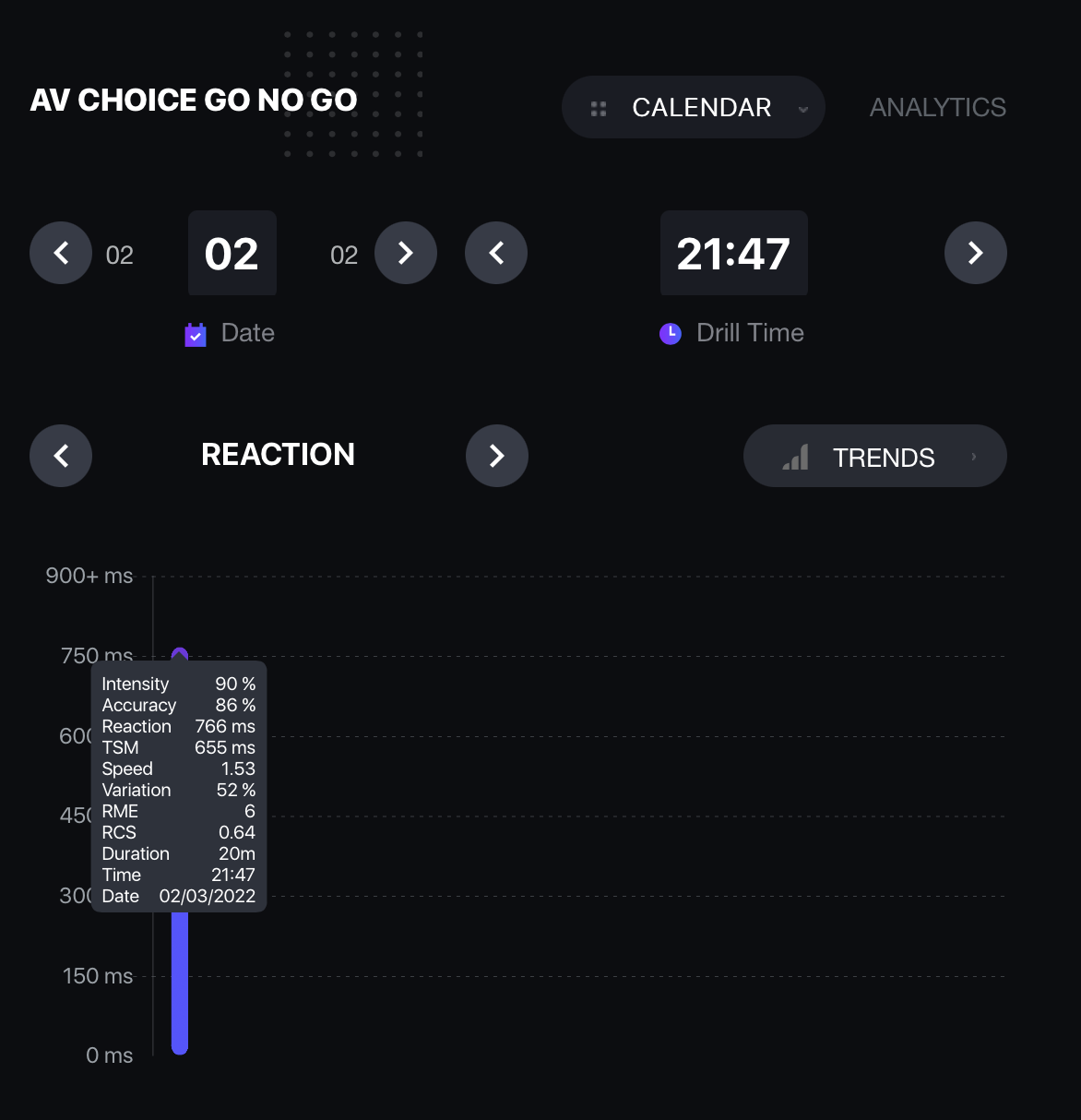 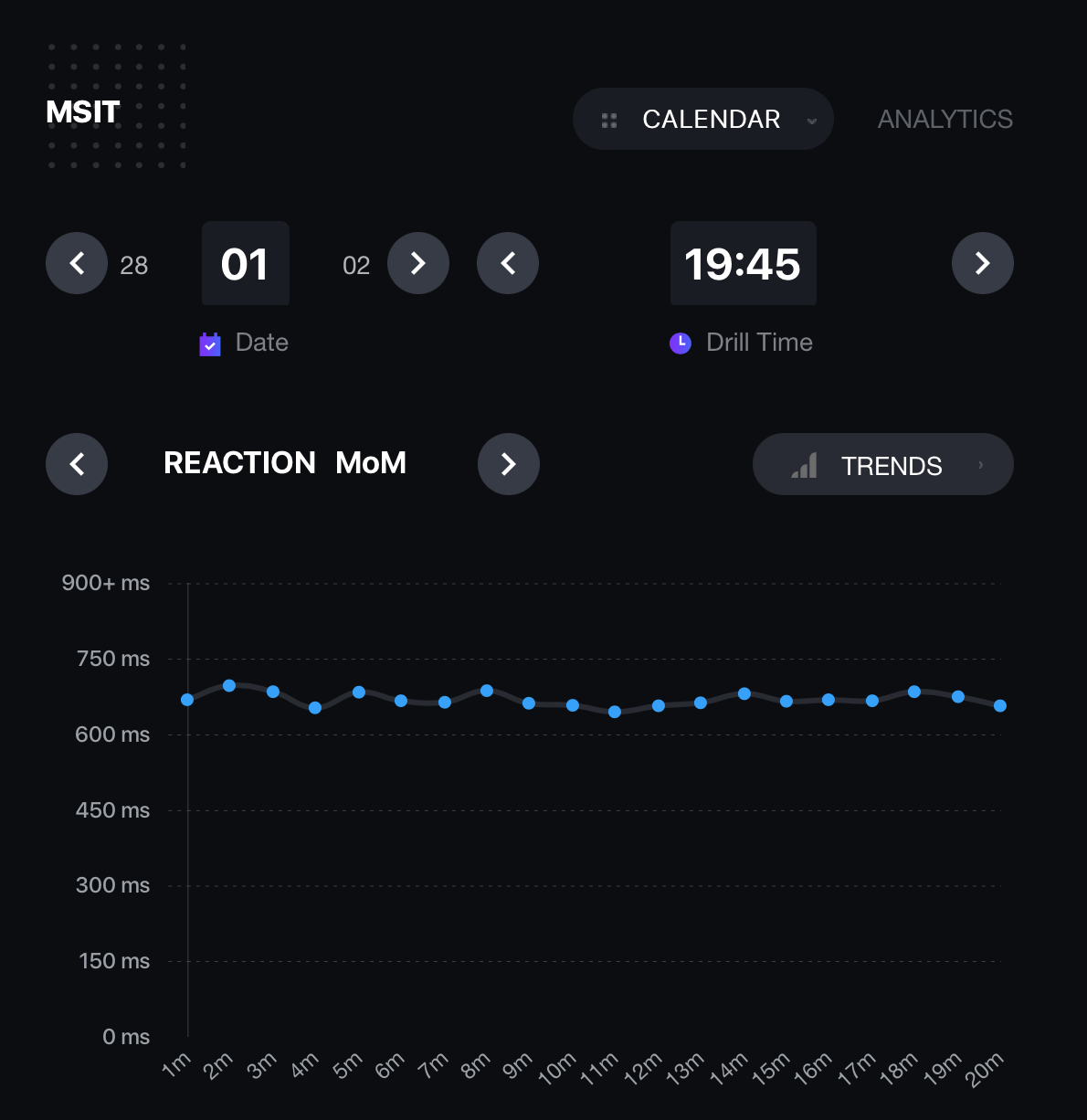 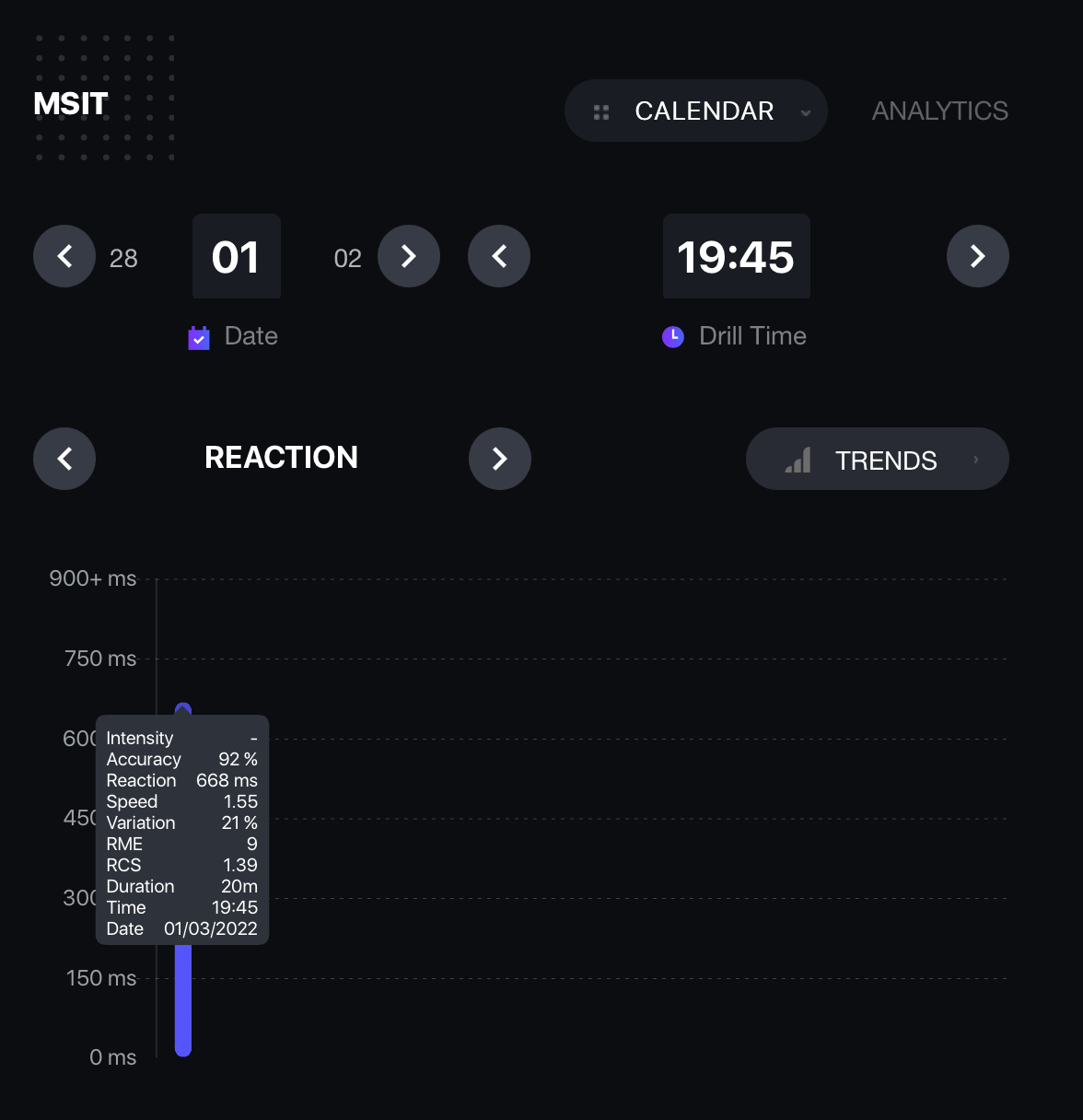 To summarise reaction time is highly variable and on its own does not unambiguously and clearly indicate if the athlete has improved their cognitive performance.

Reaction Time is the amount of time it takes to respond to a stimulus, measured in milliseconds (thousands of a second).

Speed is a statistical measurement. So when we look at it in Soma Analytics, Speed as a statistical measurement is calculated in order to make the data show a clearer trend. Speed normalises the data distribution and reduces the effect of outliers (numbers that differ significantly from other observations or data points) in the data. Normalising data distribution is important because without it there can be large variations in the data which can skew your interpretation of how well your athlete is doing. It is not possible to draw conclusions about your data when the trend is too variable.

In the speed data below, you can see the MoM changes are not as variable as in the reaction time graph above (the lines have less peaks). This is an example of how speed normalises the distribution making the data easier to interpret in terms of a tangible result, whether or not they are improving. 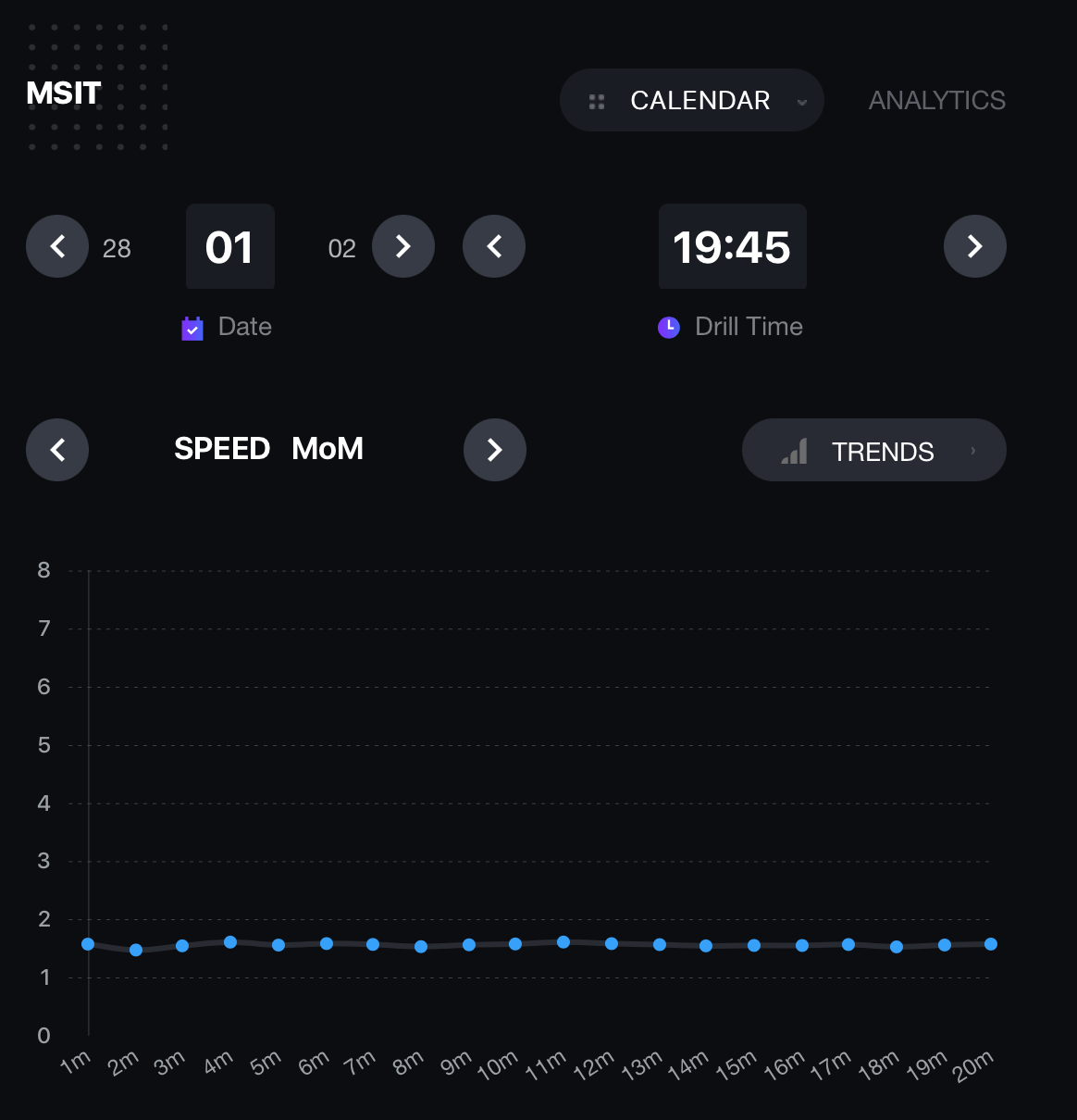 How is speed calculated?

The coefficient of variation (CV) is a statistical measure of the relative dispersion of data points in a data series around the mean. Variation is used to measure the degree of variation between testing trials in an individual athlete’s repeated measurements. This cognitive data point is the most important data point to identify changes in cognitive performance because variation tells us how consistent an athlete is. The lower the variation the more consistent the athlete is and the better their cognitive performance.

In the variation example below, you can see one athlete has high levels of variation minute on minute, while the other athlete has lower variation over the 20m cognitive task. 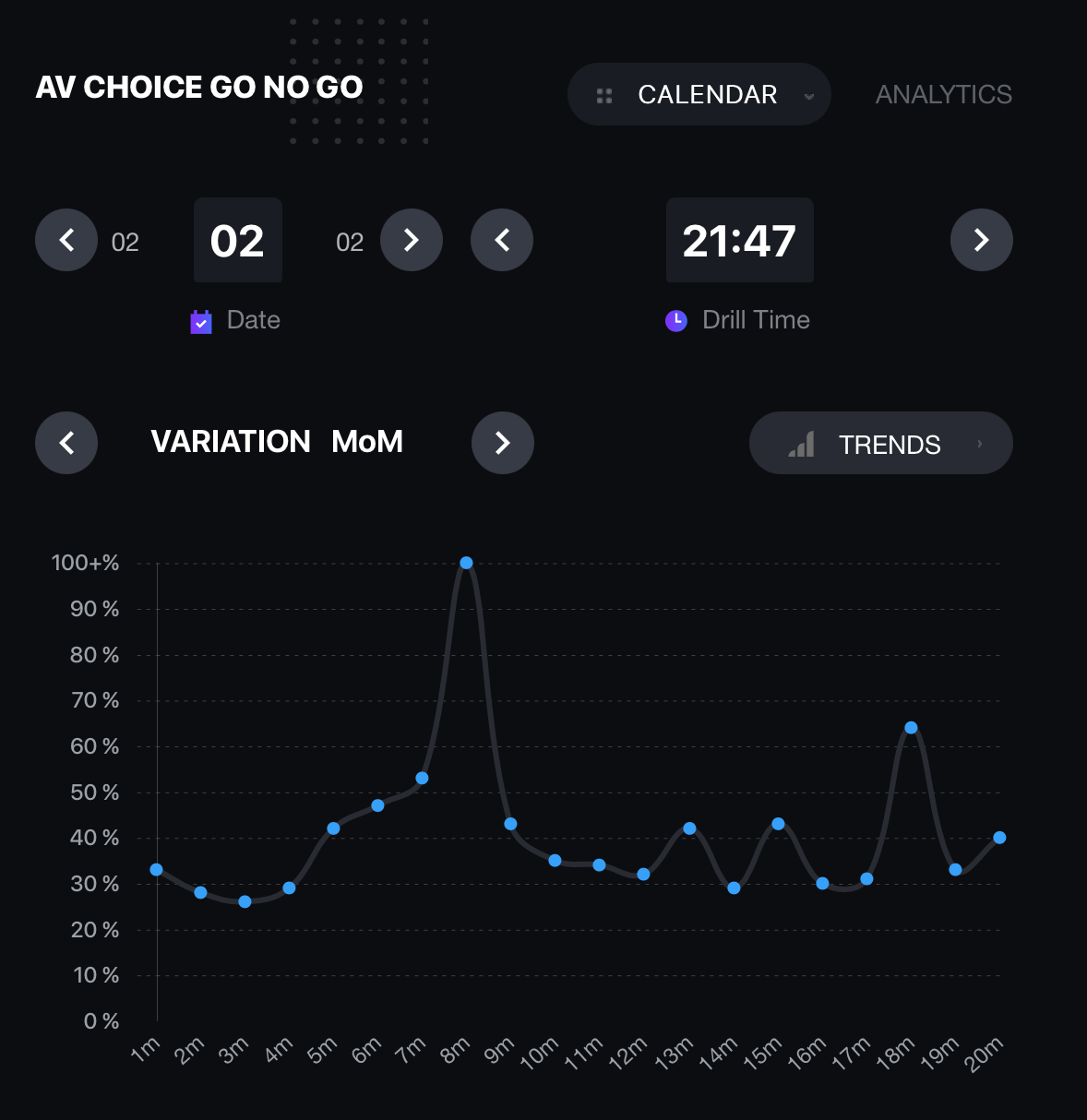 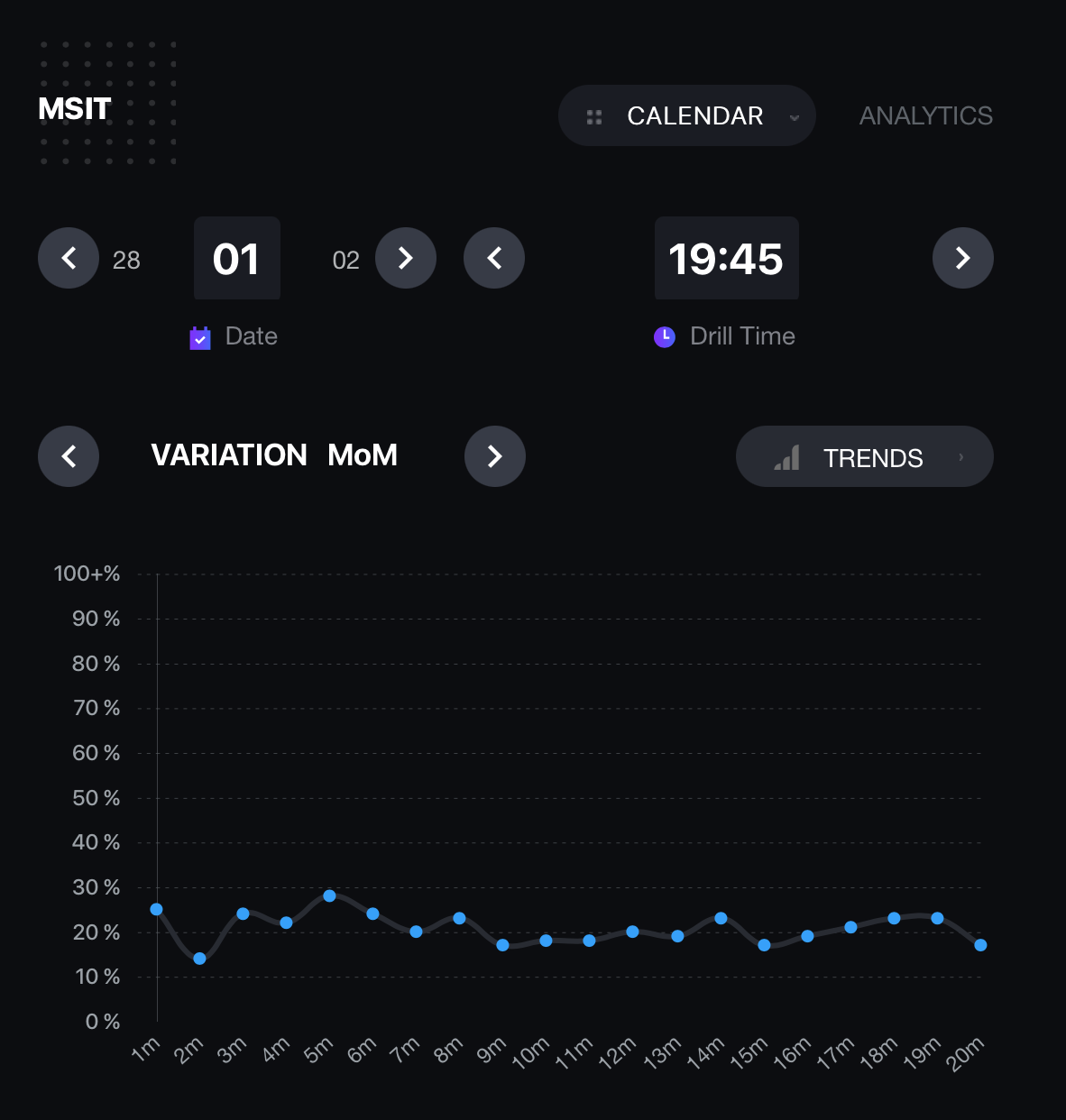 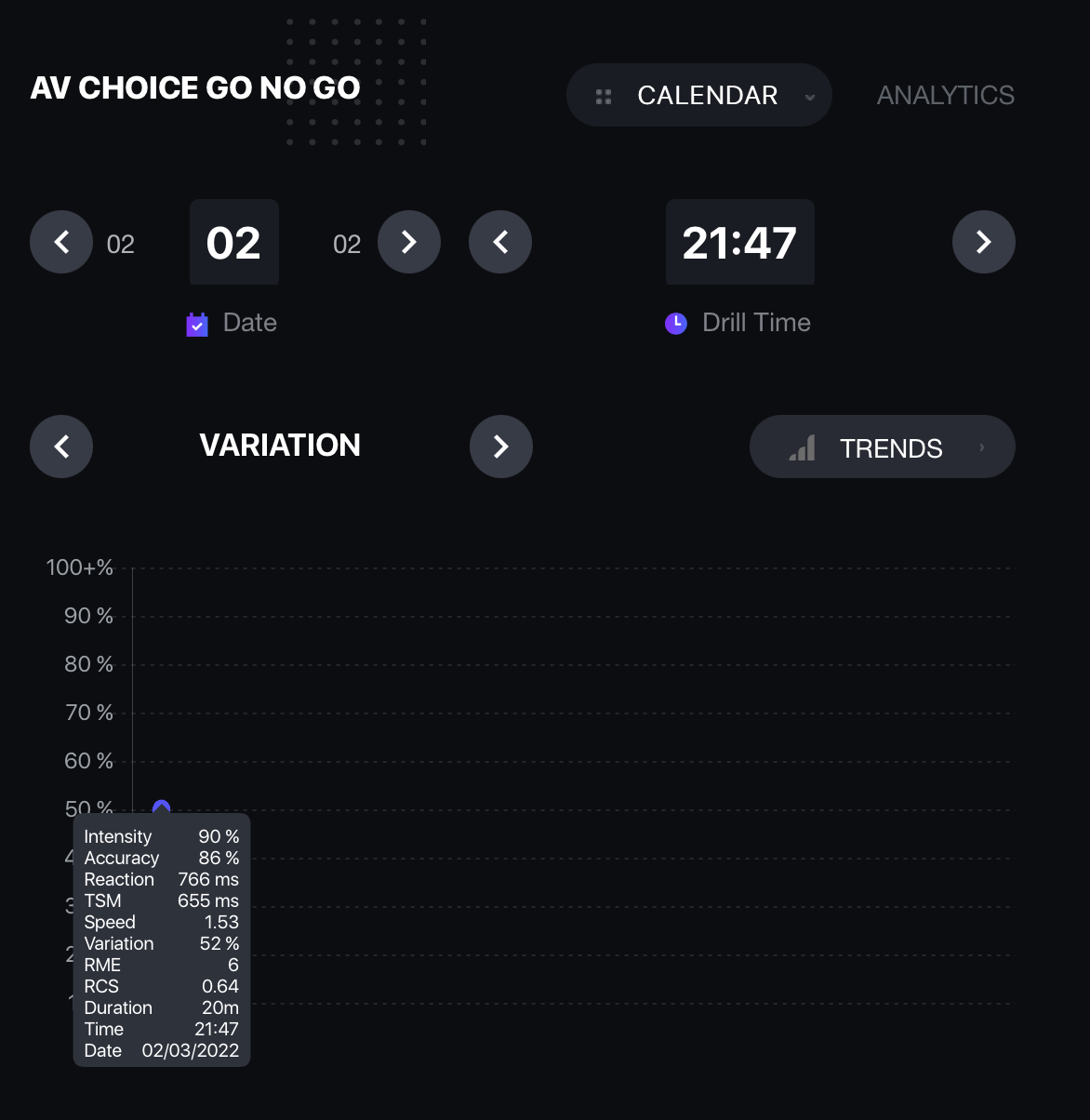 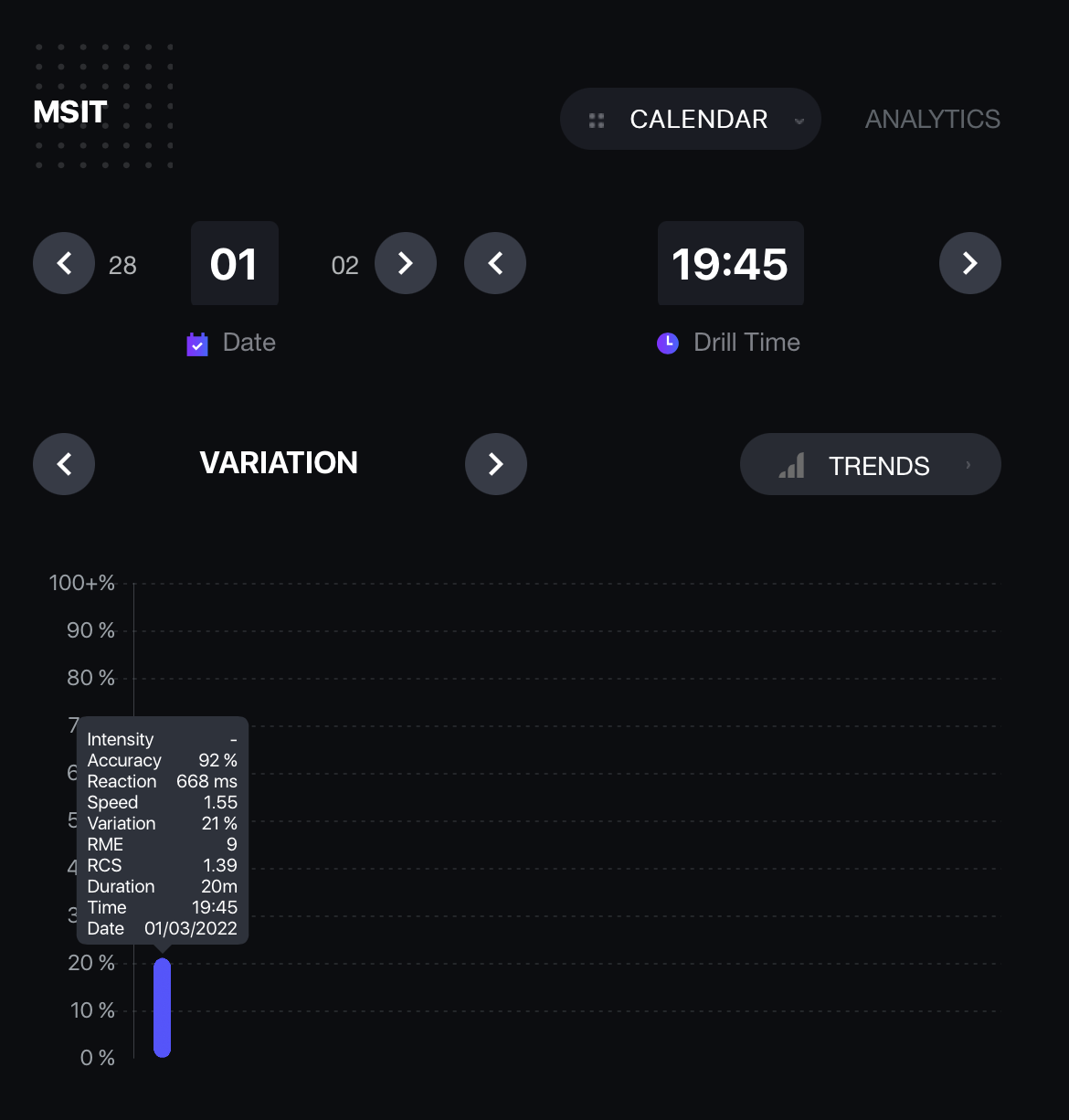 To summarise, variation gives you insights into real changes in cognitive performance and how consistent the athlete is performing.

Variation is used to measure the degree of variation between responses.

Accuracy is a very straight forward measure. How accurately is your athlete performing. 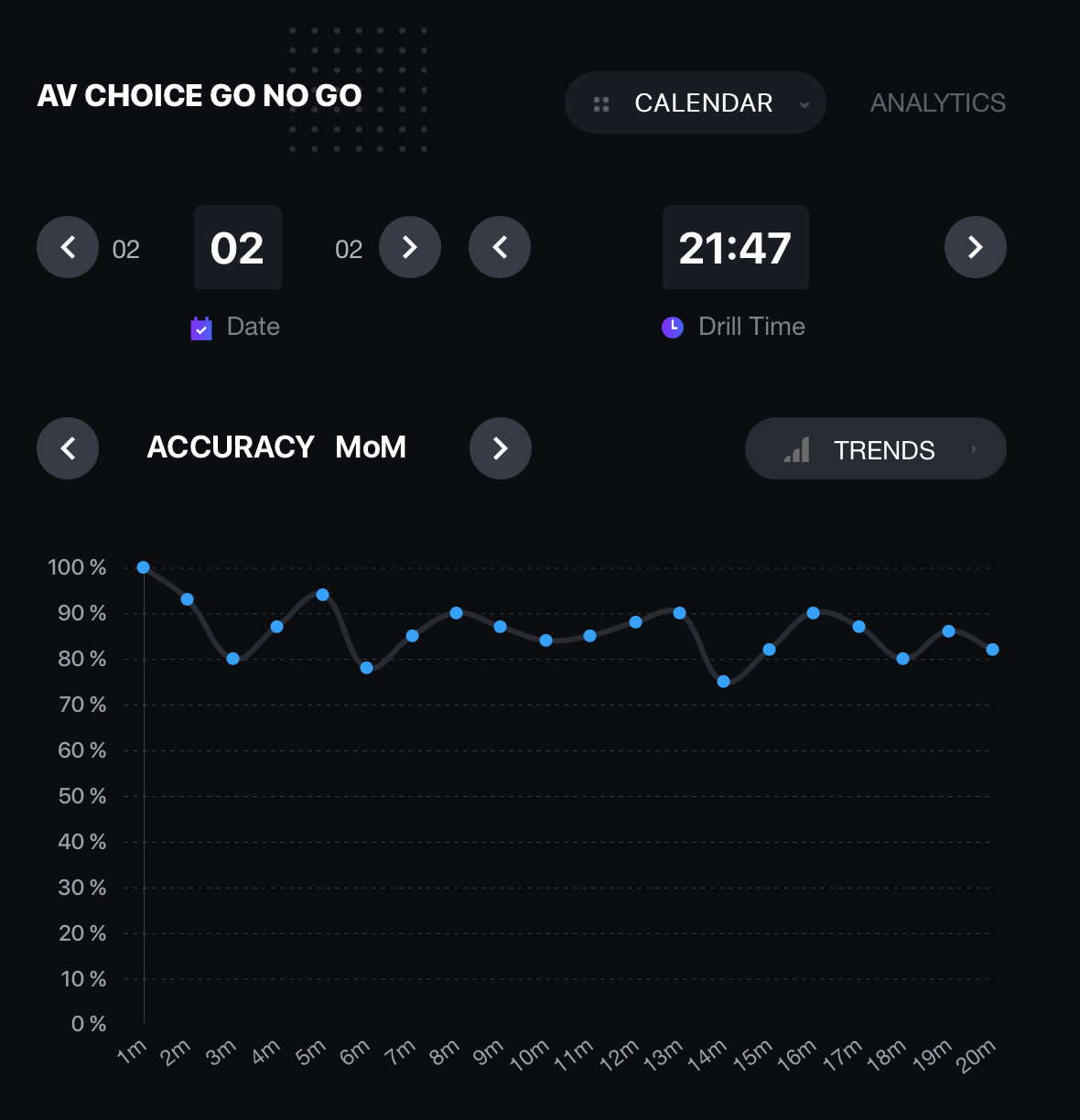 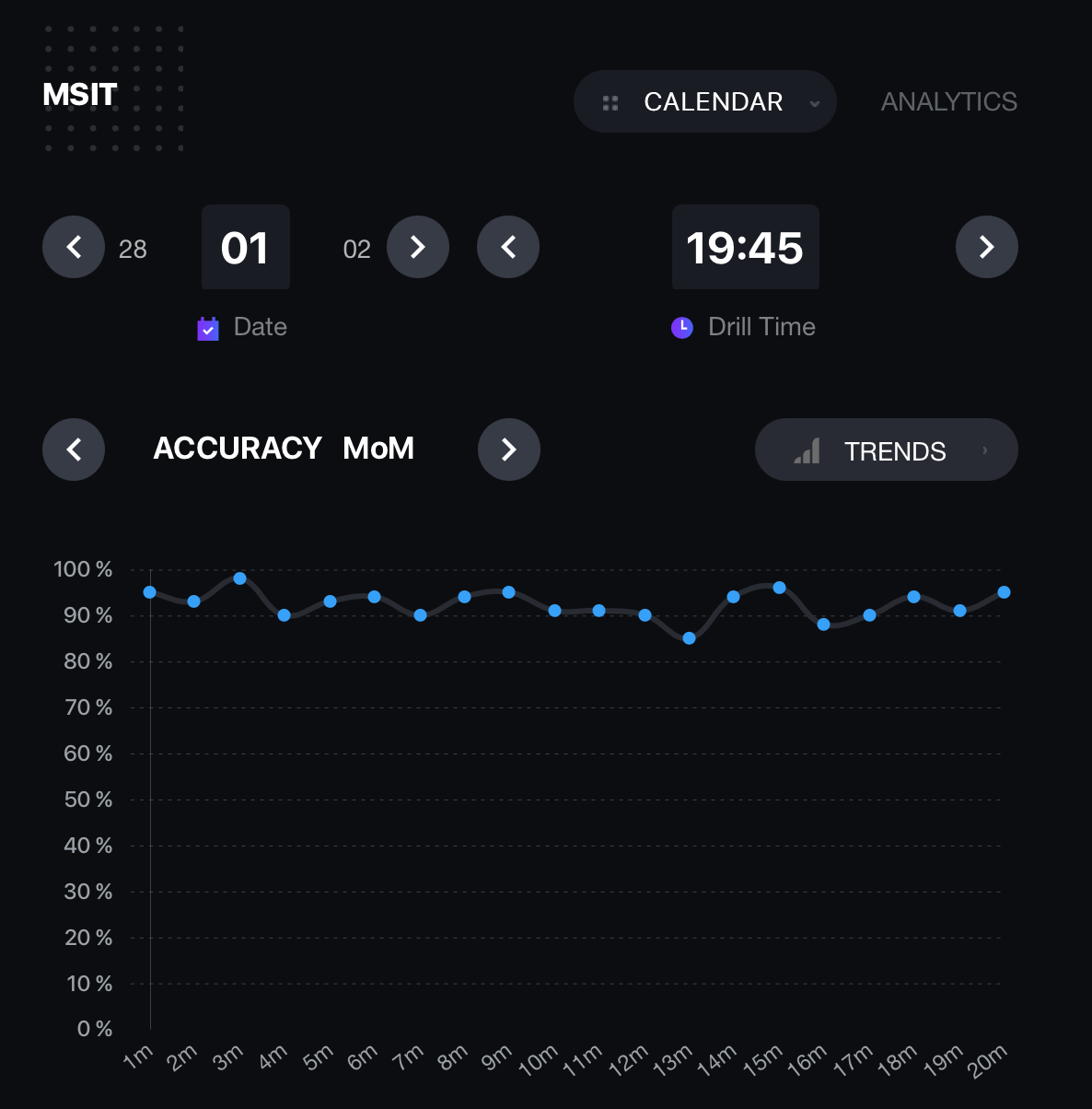 To summarise, accuracy per minute and overall accuracy gives you insights into how your athlete is performing. For instance, these measures might help identify an athlete’s cognitive breaking points or show you how well they can sustain their cognitive performance.

Accuracy is the proportion of correct responses.

Rate Correct Score (RCS) is the number of correct responses per second. RCS is a key measure that allows you to identify how fast your athlete can respond accurately per second. For instance, if your athlete performed a task with an RCS of 4, this would indicate they made 4 correct responses per second (i.e., one correct response every 250 ms). This measure is important because it takes the speed-accuracy trade-off into account; fast errorful responding would generate a low RCS, whereas fast error-free would generate a high RCS.

You will notice in the examples below that RCS is stable, however, it falls when athletes start to make mistakes, and rises when they eliminate mistakes. 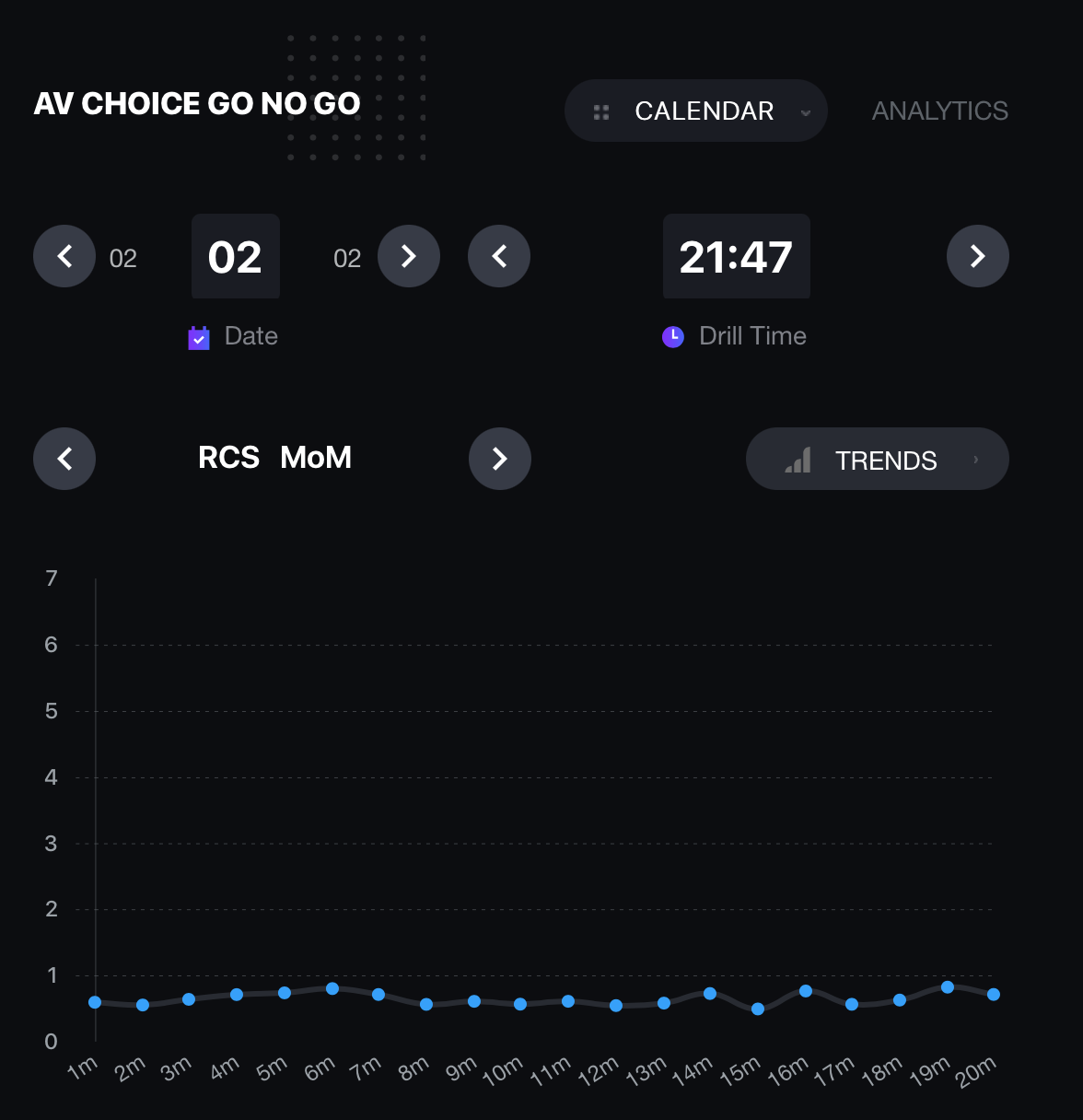 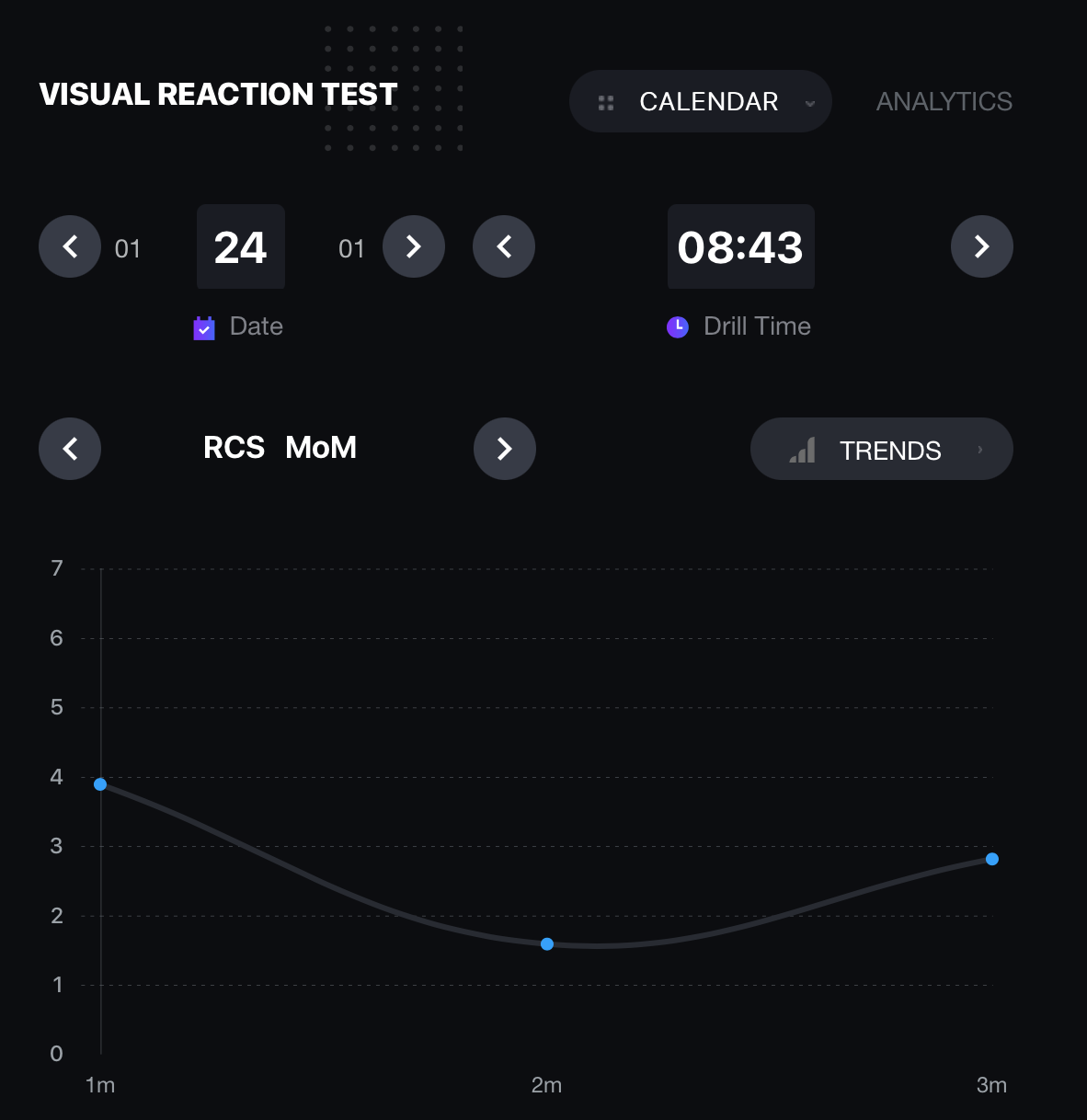 To summarise RCS gives coaches and athletes important insights to how many correct responses they make per second. By looking for changes in RCS in the MoM data trends it is possible to see if an athlete has reached the limits of their cognitive capabilities.

A comparison of methods to combine speed and accuracy measures of performance: A rejoinder on the binning procedure

RCS is the number of correct responses per second.

The rating of perceived exertion scale is used to assess an athlete's overall exertion during a cognitive task that captures how hard they feel they have been made to work. It is an integration of various central and peripheral feelings, such as sweating, breathing, and muscle tension.

This scale is useful for obtaining feedback from an athlete of how they are perceiving their exertion levels when performing a cognitive task. This scale is best used when the athlete is combining their physical and cognitive training.

Assess an athlete's perceived exertion during a cognitive task.

This scale is useful for getting feedback from the athlete about the perceived demands of a cognitive task. It captures the mental workload, or the amount of mental resources, demanded by a cognitive task.

Assess an athlete's mental effort during a cognitive task.

This scale is useful when you want to know the extent to which a cognitive task produces mental fatigue in your athlete. This is important because this temporary state of mental tiredness is associated with impaired performance.

What are the advantages of Tracking Heart Rate (HR) as an athlete?

Heart rate is a quick and easy measure to check. Most athletes should know their own average resting heart rate and their maximum heart rate. Coupled with general subjective feelings of well-being, heart rate can indicate recovery, as well as how hard your athlete is working. If their heart rate is unusually high during a training session that is not normally particularly difficult, and the athlete is feeling a little flat, it suggests they are not recovered enough to push as hard usual, or suggests the need to incorporate recovery measures as part of training.

What are the advantages of Tracking HRV as an athlete?

HRV measurements can give more in-depth information and give you a heads up BEFORE your heart rate is affected and you start feeling flat. Particularly with athletes, it can be hard to tell the difference between mental fatigue and physical fatigue, not feeling like doing something today as opposed to having genuine limits on performance. HRV offers a means to capture how your nervous system is doing and thereby help head problems off at the pass.

It is very important to understand that regular and consistent measurements are required to give you a proper picture of HRV. You need to know your own TREND. As it is with many measurements when it comes to the body, a one-off snapshot is not always a great indicator.

In the example below you can see the athlete starts their cognitive training with a 67.95 rMMSD and after 5 minutes their rMMSD has declined to 46.35. This indicates that the task is likely to have caused parasympathetic nervous system withdrawal and sympathetic nervous system activation. This is typical and shows that the athlete is finding the cognitive training challenging.

In the second trend example, you can see from session 1 to session 3, the athletes HRV is higher even with the increase of task intensity (50% to 60%) This shows that the athlete is starting to adapt to the cognitive demands placed on their brain. 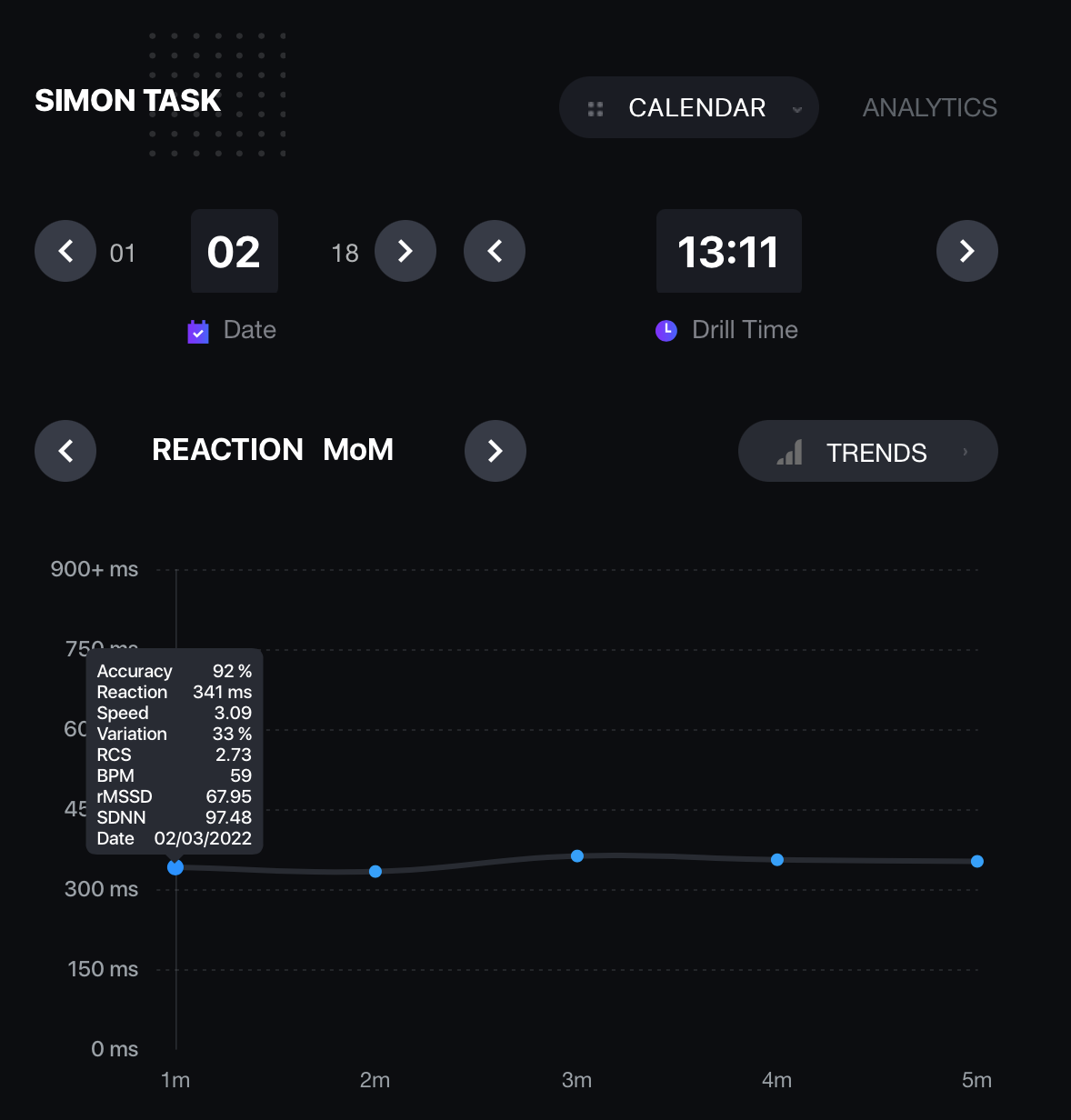 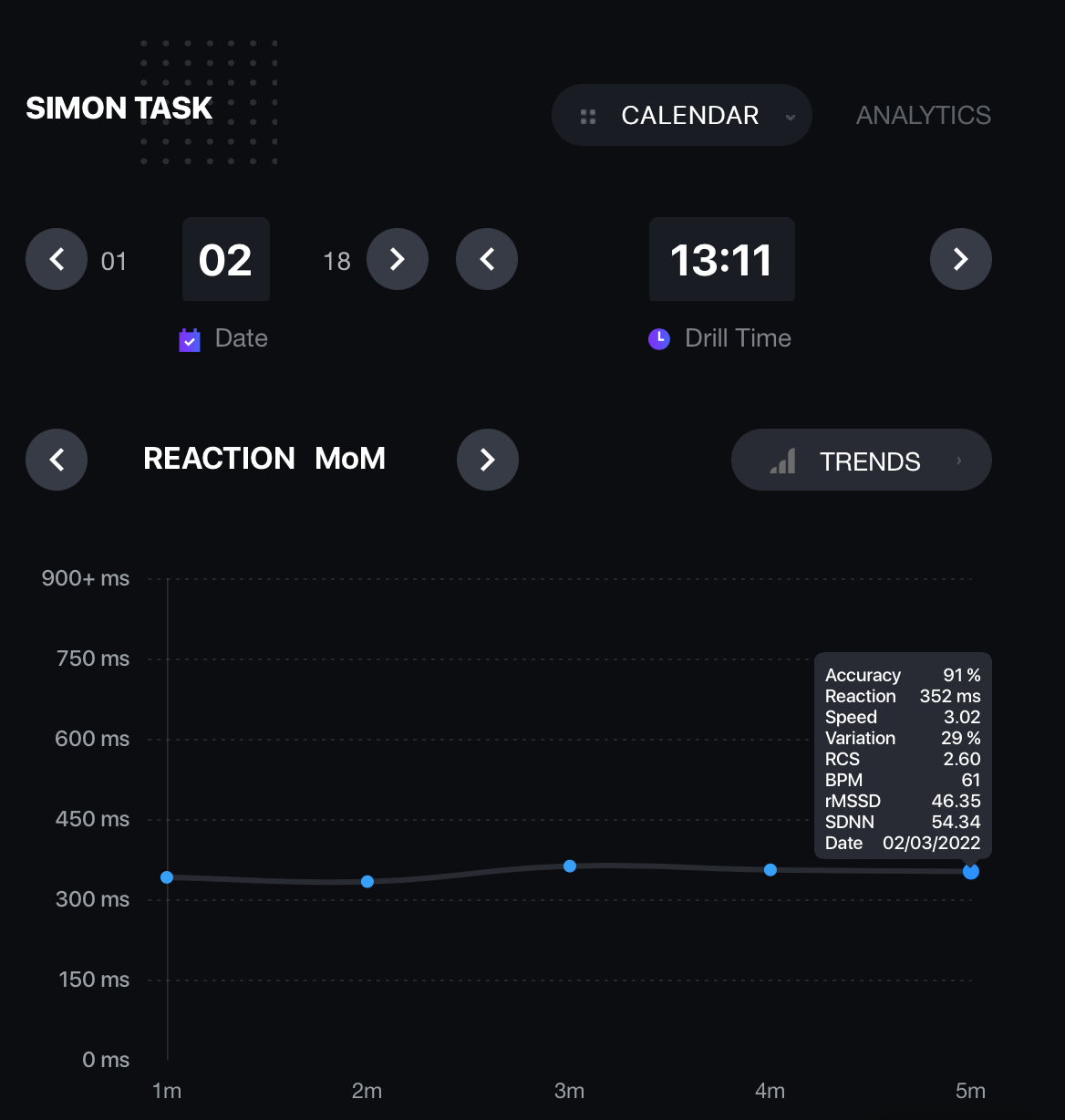 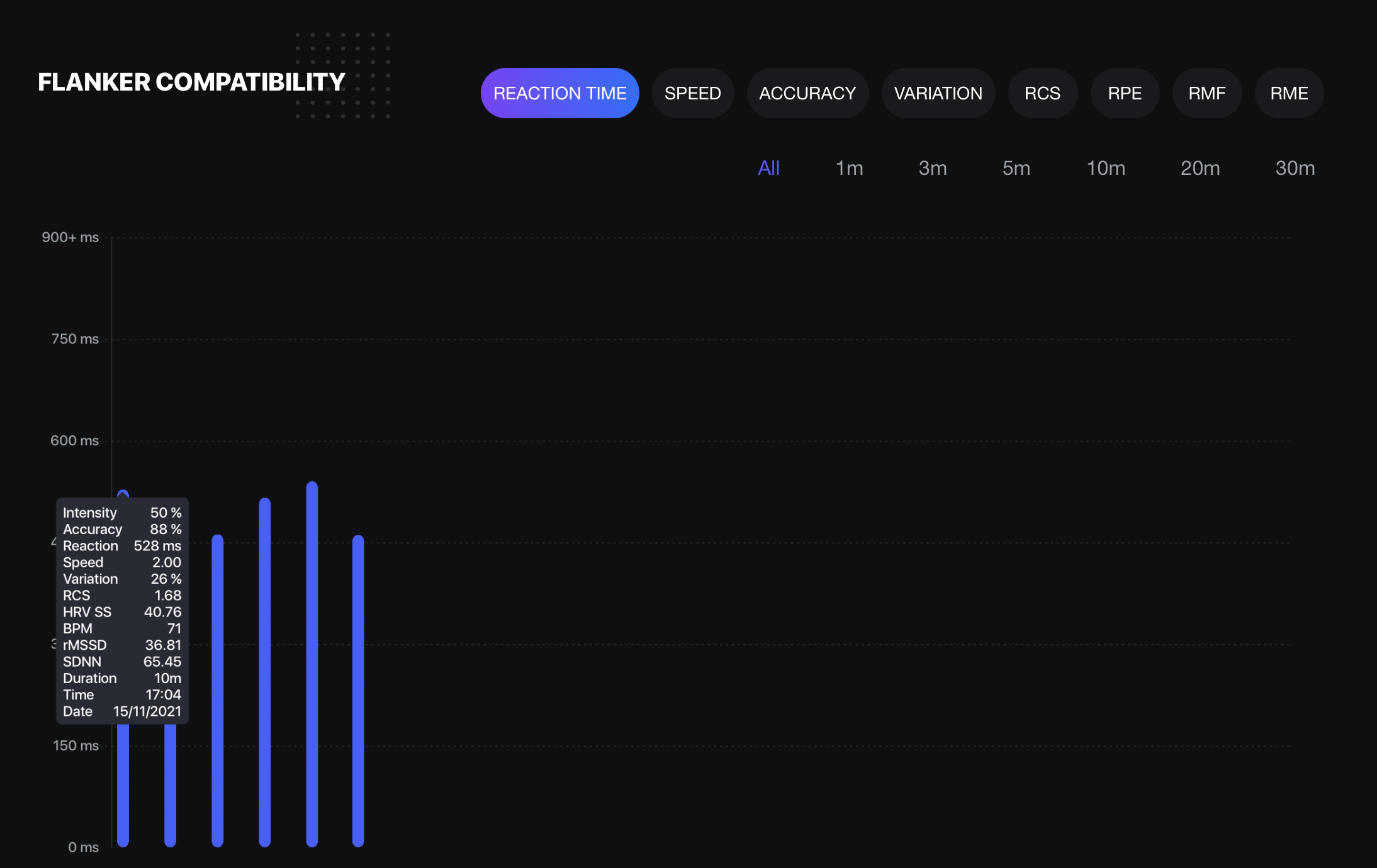 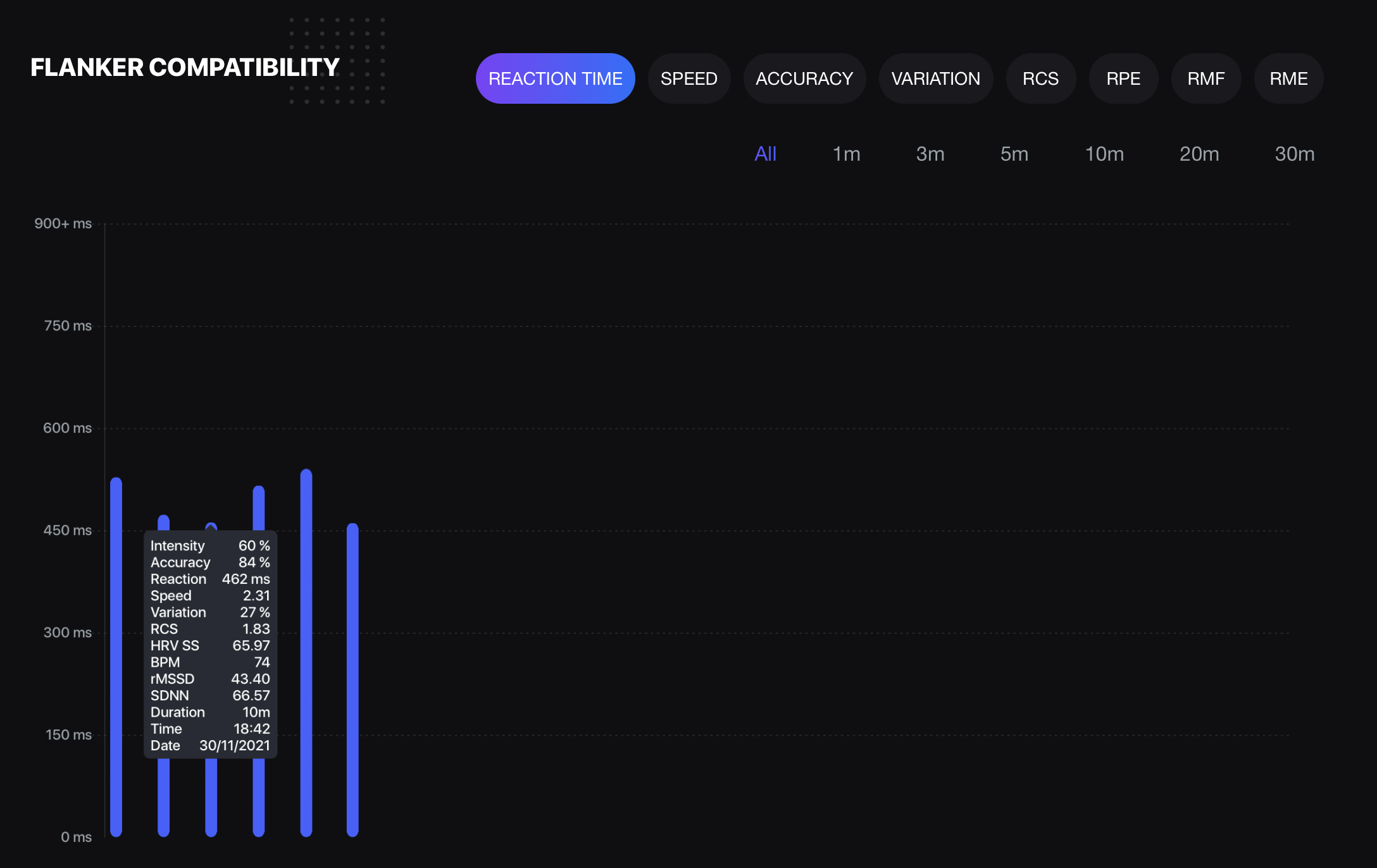 A recent study exploring the link between sports performance and Brain Endurance Training (BET), has demonstrated significant improvements in cognitive abilities. Pre- and post-testing included a 5-minute physical task, followed by a mentally fatiguing task (20-minutes), followed by a repeat of the physical task. Compared to the control group with no training, the BET group improved cognitive performance, as seen by increased task performance with a reduction in mental fatigue and exertion. From only 5 weeks of computerised cognitive task training, lasting 20-minutes per session (20 total sessions), the BET group displayed an increase in heart rate variability, over time, post-training (P<0.05). This indicated less effort required for the physical tasks in post-testing. 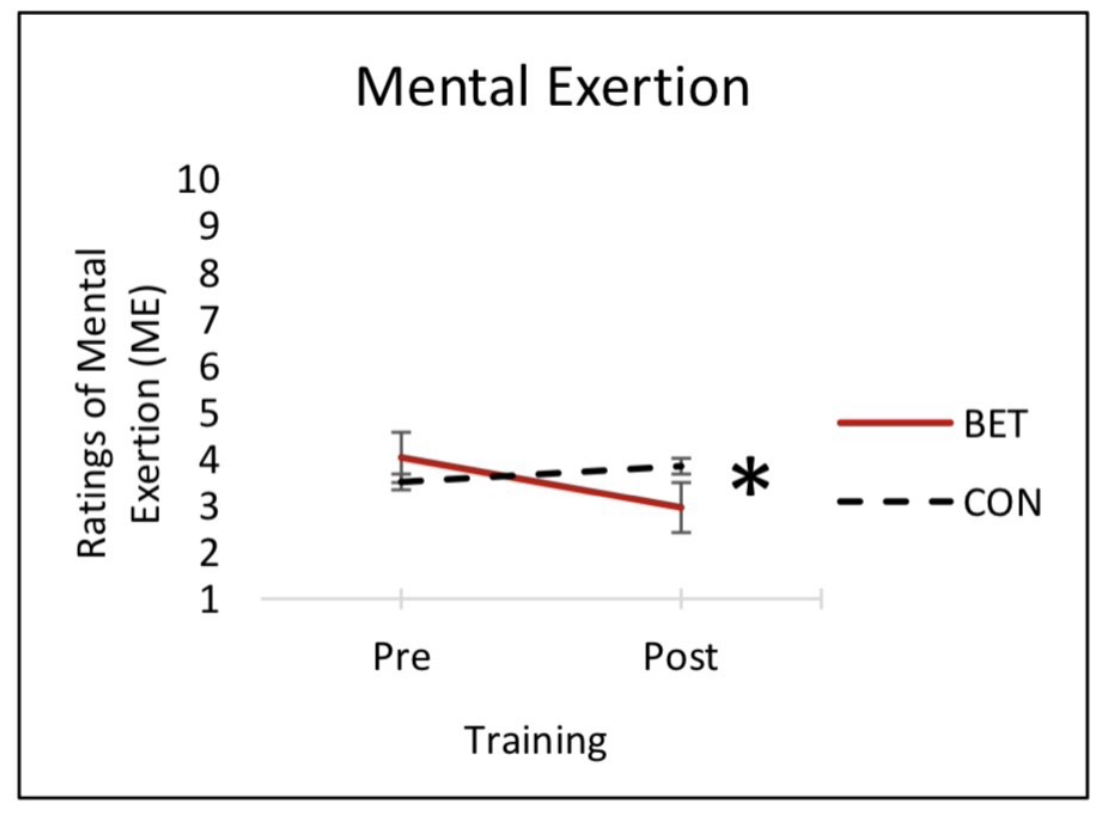 Regarding cardiac activity, we noted a significant decrease in participant's average heart rate in the BET group during the physical and novel cognitive tasks compared to the control group. This finding may be explained by the fact that the BET group perceived the tasks as less demanding seen by the increase in heart rate variability, consistent with the concurrent method (C.Ring, N. Dallaway, S.J.E. Lucas, 2017). While heart rate variability is typically correlated with perceived exertion (Shortz et al.), an increased HRV is associated with greater self-control (Zahn et al., 2016) and enhanced performance (Smith et al., 2019).

How many times your heart beats per minute.

Monitoring an athletes BPM can indicate how they are adapting to the cognitive stress over the course of the training plan.

rMSSD is the square root of the mean of the sum of squared successive differences between successive NN intervals (i.e., milliseconds between consecutive heartbeats).

SDNN is the standard deviation of all NN intervals. The SDNN describes a measure of the variability of a series of heartbeats. It reflects the influence on the heart of both the sympathetic and parasympathetic nervous systems.

🔗 Everything You Should Know About Heart Rate Variability (HRV)

🔗 Phasic heart rate variability and the association with cognitive performance

The Visual Scale to evaluate fatigue severity has been used to monitor an athletes mental fatigue levels. This combined with all the other metrics available to you, can assist you with load management.

🔗 Comparing the Effects of Three Cognitive Tasks on Indicators of Mental Fatigue. 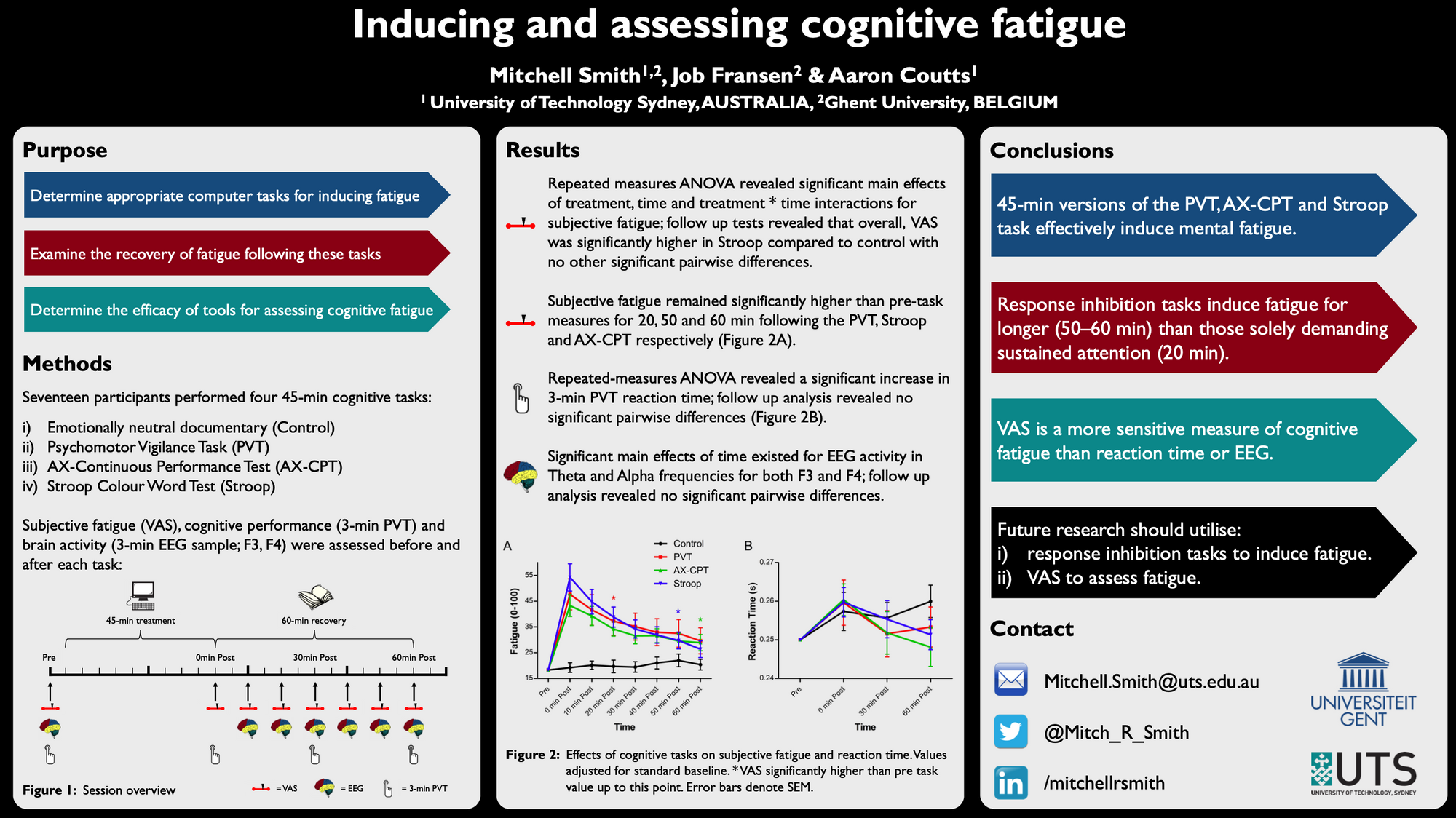 Duration of the task

When comparing data metrics it is important to compare the same durations of a cognitive task.

Time the task was completed

Knowing the time of the day the cognitive training was completed can give you insights into optimal timing windows for training. Your athlete might be a “morning” or “evening” person, and the scheduling of training might influence their performance.

🔗 How To Integrate Cognitive Training.

🔗 How To Manipulate Cognitive Load With Task Duration.

🔗 How To Manipulate Cognitive Load With Task Intensity.

🔗 How to Interpret your Athlete’s Cognitive Data.