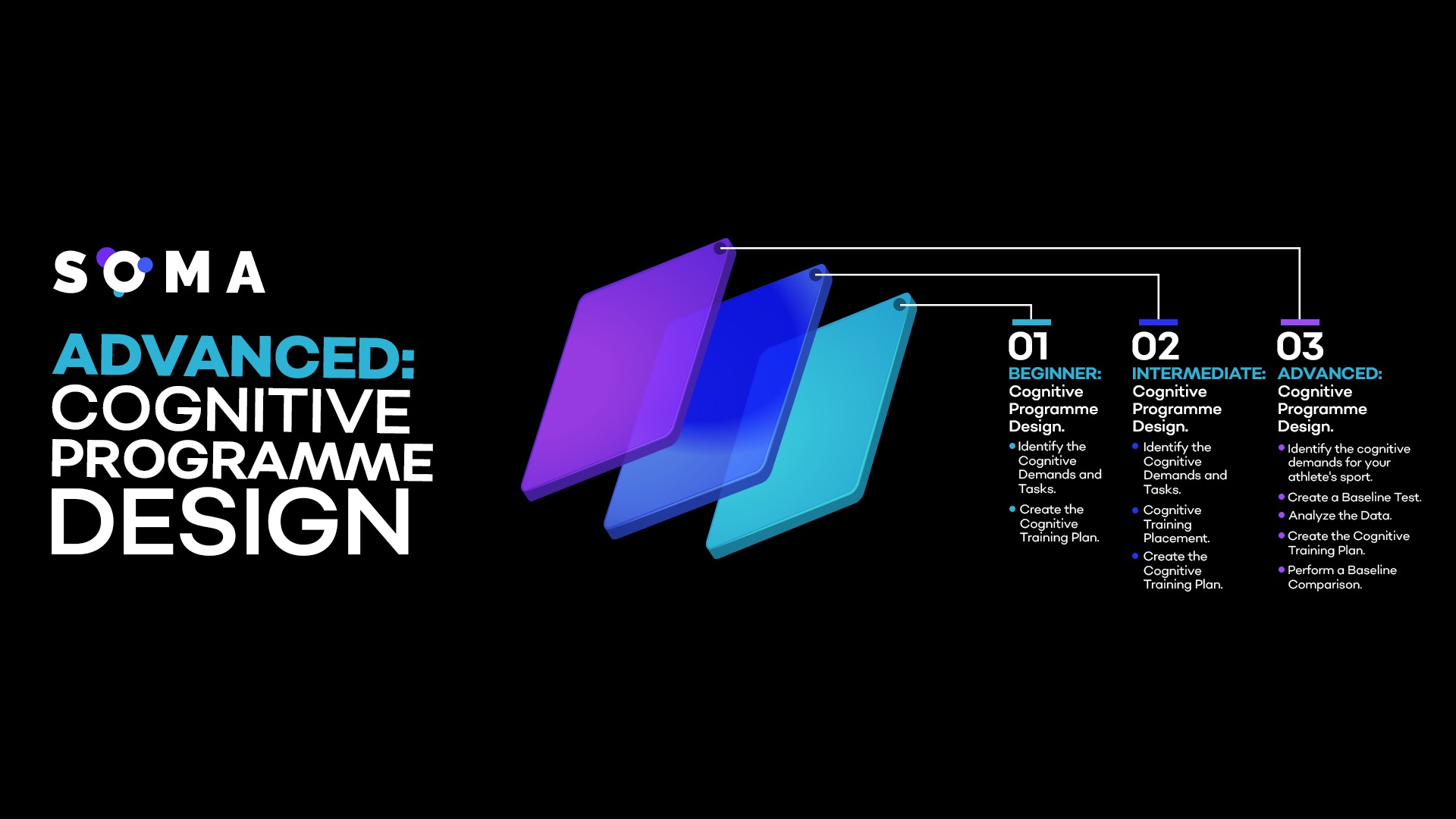 Identify the cognitive demands for your athlete's sport.

Once you have identified the most dominant demands of your athlete's sport, create a list of demands starting with most dominant to least dominant. Most athletes will require all demands to some degree but not equally.

Memory is the ability to consciously hold and use information.

Is your athlete required to consider various tactical options in their mind and select the best one depending on what unfolds during the game?

Is your athlete required to stay focused for long periods, such as being able to ignore irrelevant information, change their attentional focus, or pay close and continuous attention to what’s going on around them?

Response Inhibition refers to the ability to suppress inappropriate, irrelevant, or suboptimal actions.

Is your athlete required to inhibit responses during a game, such as not responding to an opponent’s feint (i.e., “not tricked into buying a dummy”)?

Decision-Making is the cognitive process resulting in the selection of an option or a course of action among several possible alternative options.

Is your athlete required to constantly make decisions based on new information becoming available?

athlete's sport, it is time to build a baseline test.

Do not overthink this step. The purpose is to collect data to estimate where your athlete’s current capabilities are. Focus on the cognitive demand, and adapt the load of the task with modes as needed. 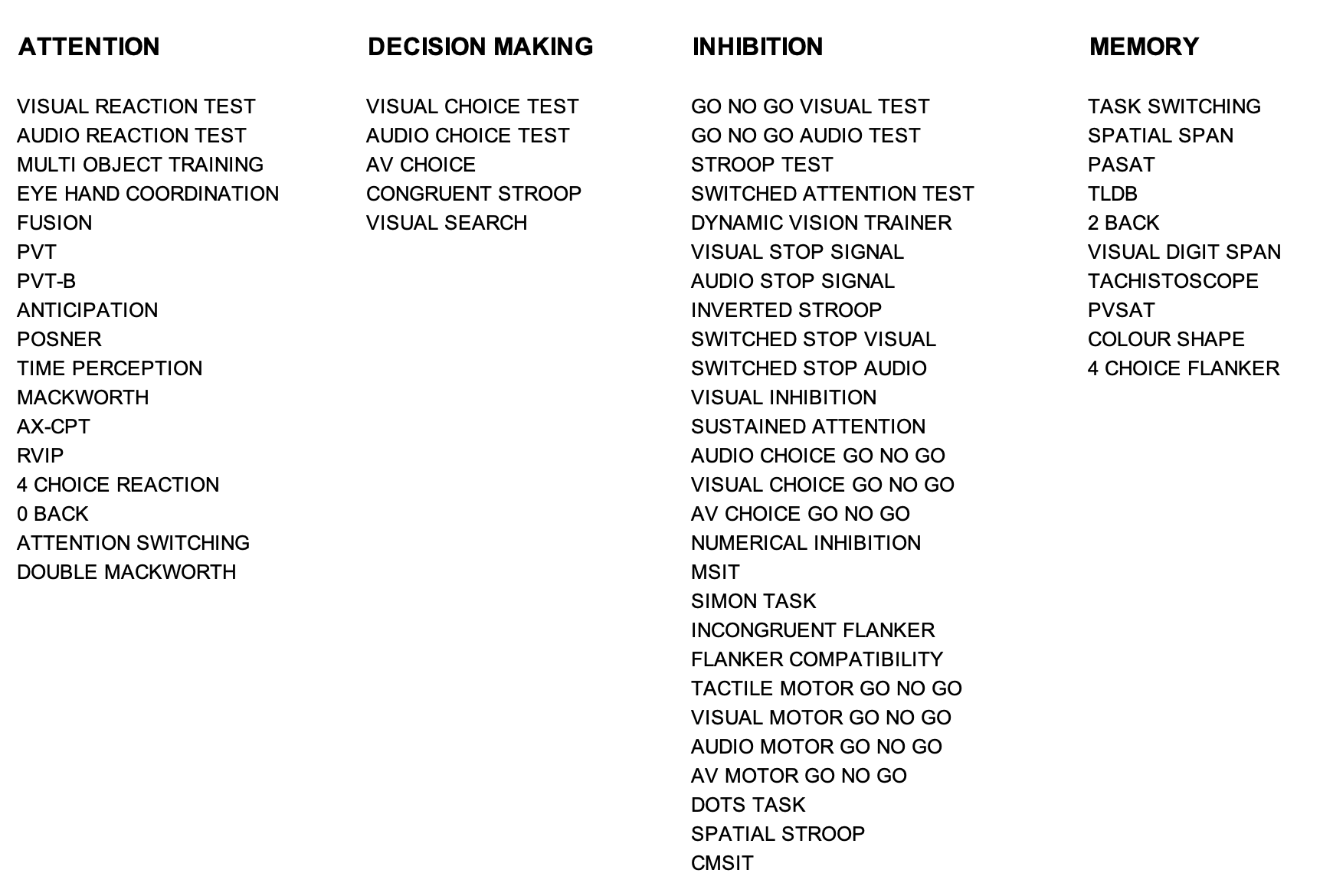 Remember you need plenty of data in order to make good decisions. Baselines that are too short (with not enough tasks) will not allow you to pinpoint where your athlete is struggling because the tasks are not long enough to tax them sufficiently to tire them out. Also, short baselines will not give you enough data in terms of the number of responses (i.e., micro-decisions).

However, we should be mindful that baseline assessments are also training their brain and so we need to load them carefully according to the stage of their year- long season. Here we must strike a delicate balance of obtaining the data needed, without disrupting the athlete's training regime.

Once your athlete has completed their baseline test, analyse their data and

identify their strongest and weakest cognitive tasks for that cognitive demand.

The tool for this is the soma analytics profiling tool which gives you percentile breakdowns for each cognitive task across all measures and cognitive performances are categorised into Elite, Average, and Poor.

Generally speaking, if your athlete falls in the elite range for all the cognitive tasks you have selected for their baseline test, you may have underloaded the baseline (i.e., made it too easy for them). You will need to find harder or more intense tasks for that cognitive demand or apply a specialised training mode to increase the overall load on the athlete's brain. Most athletes will struggle with at least two areas of cognitive training when they begin. If your athlete is acing everything (i.e., universally performing at an elite level), go back and create a new and more difficult baseline for them before you move to the next step.

Based on the data from the baseline test you should now see your athlete's strengths and weaknesses. You may now begin selecting cognitive tasks from the cognitive demands you want to focus on during the current mesocycle. This step is usually a hurdle for most people, who ask themselves “Which cognitive task do I select?” It is best to try and not to overthink at this stage – remember that this is an interactive process – you may need to adapt the plan, sometimes more than once, to optimise it for your athlete.

elements of the stronger cognitive demands, with a 2:1 or 3:1 ratio of weak to strong demands.

This means the cognitive training plan is not just focusing on their weaknesses or strengths but rather is a mix/blend of both. Remember that you are only as good as your weakest link but you still need to maintain and update your strong cognitive skills.

Cognitive Integration can happen in 4 ways:

This is an extremely engaging integration that pushes an athlete to make fast, accurate decisions while maintaining a certain physical workload.

This seamless integration increases the overall training load and requires the athlete to switch between physical and cognitive training.

This integration is very effective at mentally stretching athletes when they are already fatigued and replicates the demands of intense competition when athletes need to push their physical and mental limits.

Adapt the load to the current season.

Adapt your athlete’s cognitive program to fit in with the phase of their season: sessions should be relatively long, medium, and short in the off-season, pre- season, and in-season, respectively.

Just like in physical training there is no magical cognitive training task. Instead, the magic is in the reps, sets, rest combinations, and layers within a training plan. The same principle applies to cognitive training. Apply sufficient intensity, duration, and a specialised mode that increases the overall cognitive load on your athlete's brain. Track the data and adapt as needed.

Once task selection is complete you will need to ensure you have periodised the cognitive training program to avoid any performance plateaus and keep your athlete moving in the right direction. Just like physical training, you must push your athletes to create adaptations.

Importantly, repeating the same task with the same load each week will not improve your athlete's performance.

Once the training program has been completed you must analyse the data. Soma Analytics gives you the ability to get a breakdown of each cognitive measure per task as well as the overall change in cognitive performance. You can now identify which demands have improved and which demands need to improve and therefore should be targeted in your athlete’s next cognitive training program.