How To Track Progress In A Batch of Discrete Parts

Tulip's "app completions" model is designed for single-piece flow, but here's how you can track a batch of discrete parts within completions

In this article, you will learn...

In other words, every time an operator presses the "Complete" button in an app, valuable data is recorded and can be analyzed using the Analytics Builder.

However, the "app completion" model is intended to fit one-piece flow. If your organization uses batches for discrete parts, there are still multiple ways that you can track accurate shop floor data.

This guide will help you figure out which app logic pattern is best suited for your process. For batches of discrete parts, you can either:

If you are interested in tracking a batch of chemicals or pharmaceuticals, check out this separate guide to traceability of continuous processes in Tulip.

Here's how to set up each pattern shown above for batches of complete parts.

App Completions After Every Part

If each part in the batch requires a lengthy operation, it may make sense to track each part in a separate app completion so you can gather better cycle time data on each part.

In the first step of the app, you might ask the operator to input the batch number before allowing them to continue to the work instructions.

You can do this with a Form Step: 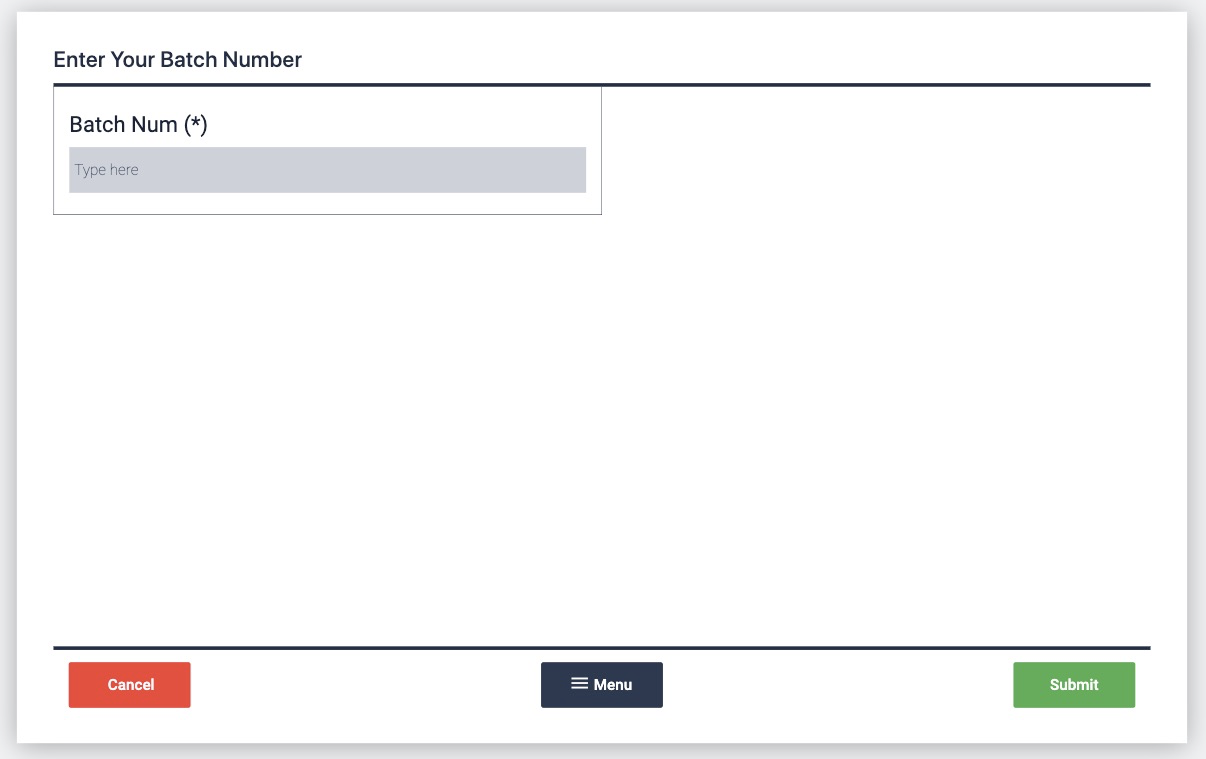 This text widget stores its value in a variable called "batch_num" 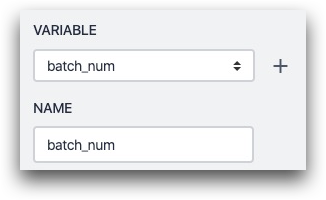 Then, you will want to make this variable "persistent" so that it is not reset when the app is completed. If the batch number is persistent, you will not need to re-enter it until you start a new batch. You can do this by checking the "Persistent" checkbox in the Context Pane: 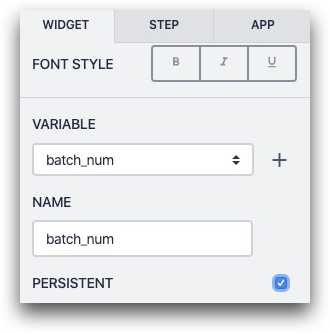 Then, you can ensure that the operator skips the first step on every subsequent part by using the "App" "Complete Then Change To Step" trigger at the end of the app to go back to the first step of instructions every time.

Finally, you will need to create a "Start New Batch" button that will just go back to the first step so that you can change the persistent "batch_id" variable:

Completing the App At The End of Every Batch

Many of the concepts featured in the section above can also be used when there is only one app completion for a whole batch.

We generally see manufacturers complete an app at the end of every batch when each operation is very quick, and the operator needs minimal work instructions to do their job.

Here's what the flow might look like for app completions at the end of every batch of discrete parts:

So, the app would start with a Form Step like the one shown below: 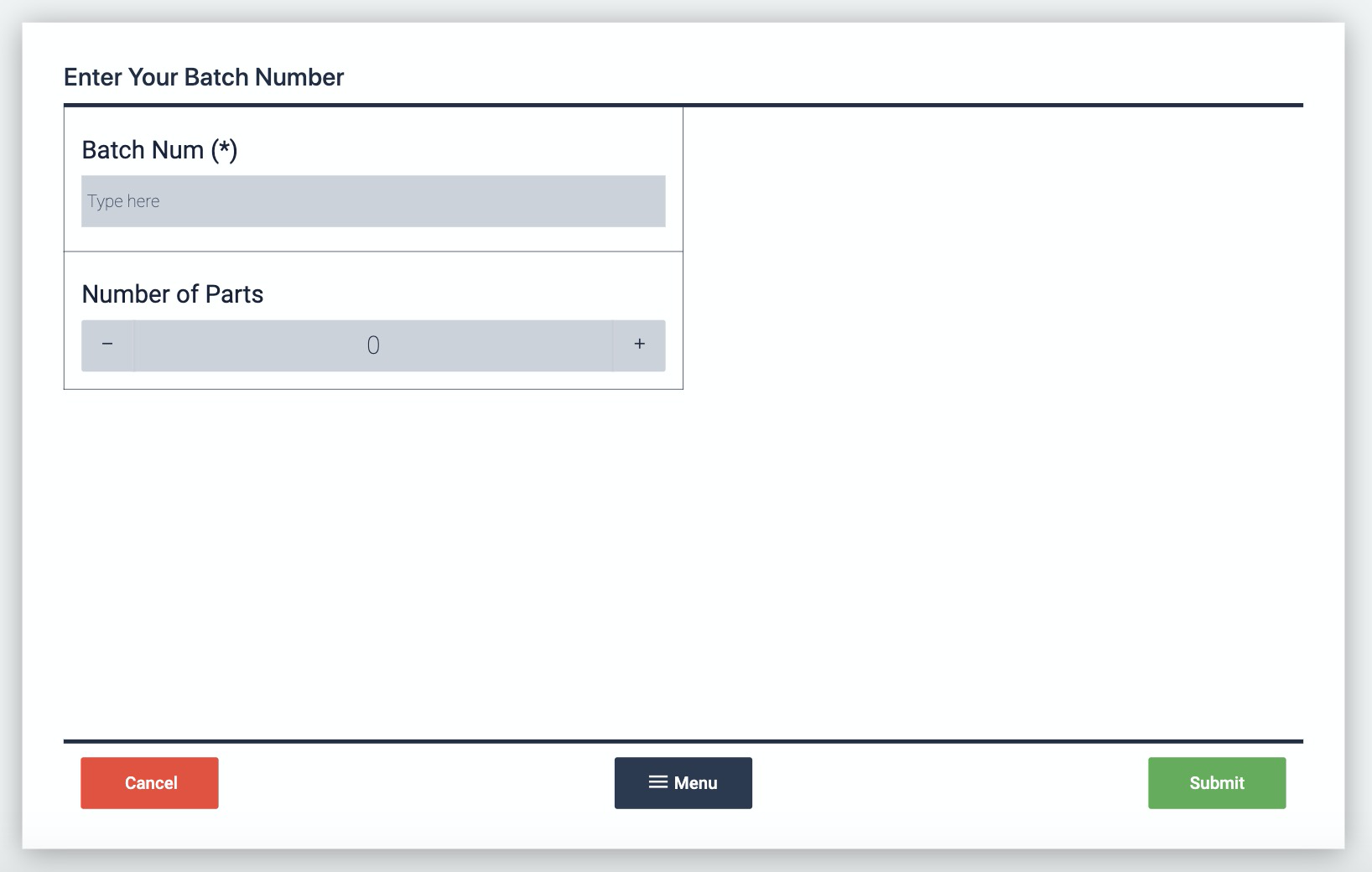 The "Number of Parts" value would be tracked in a variable called "total_parts", shown below:

There is no need for persistent variables in this example.

Instead, you can use a series of work instruction steps, and the final step would have a "Part Finished" button. It might look like this: 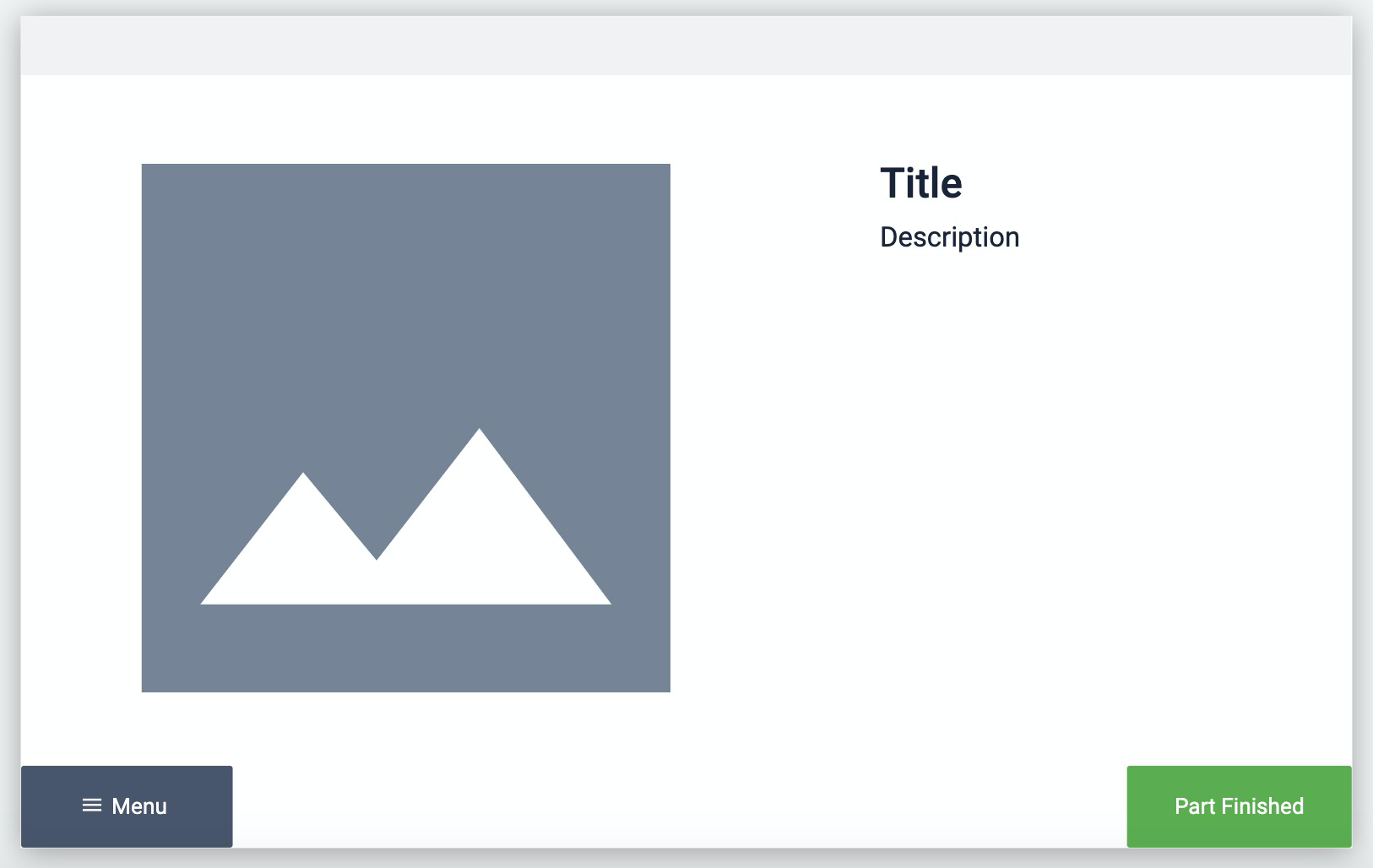 When an operator presses "Part Finished", you will want to increase a counter that tracks the number of parts completed in the batch.

The first trigger on the button looks like this: 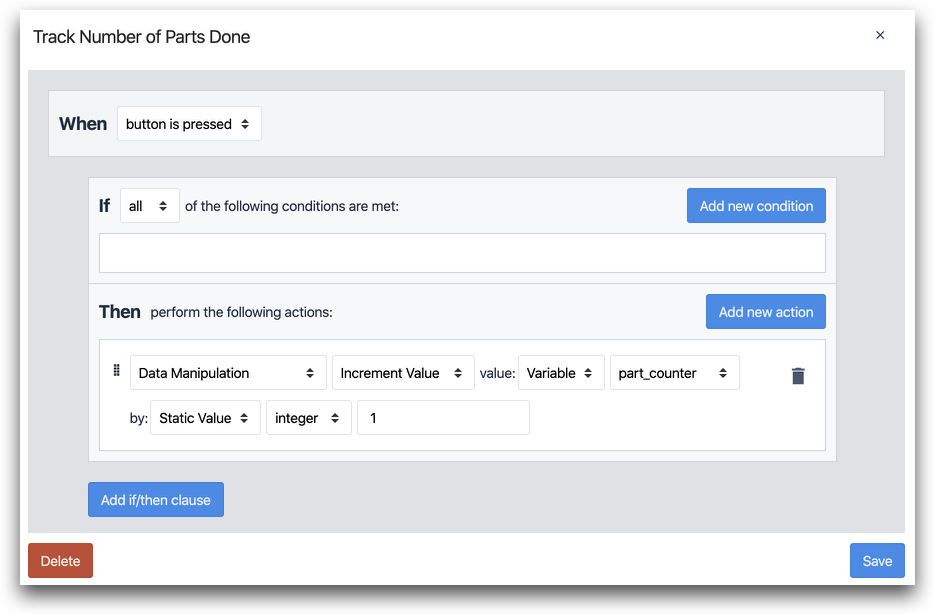 The trigger increments a variable called "part_counter" every time a part is finished. 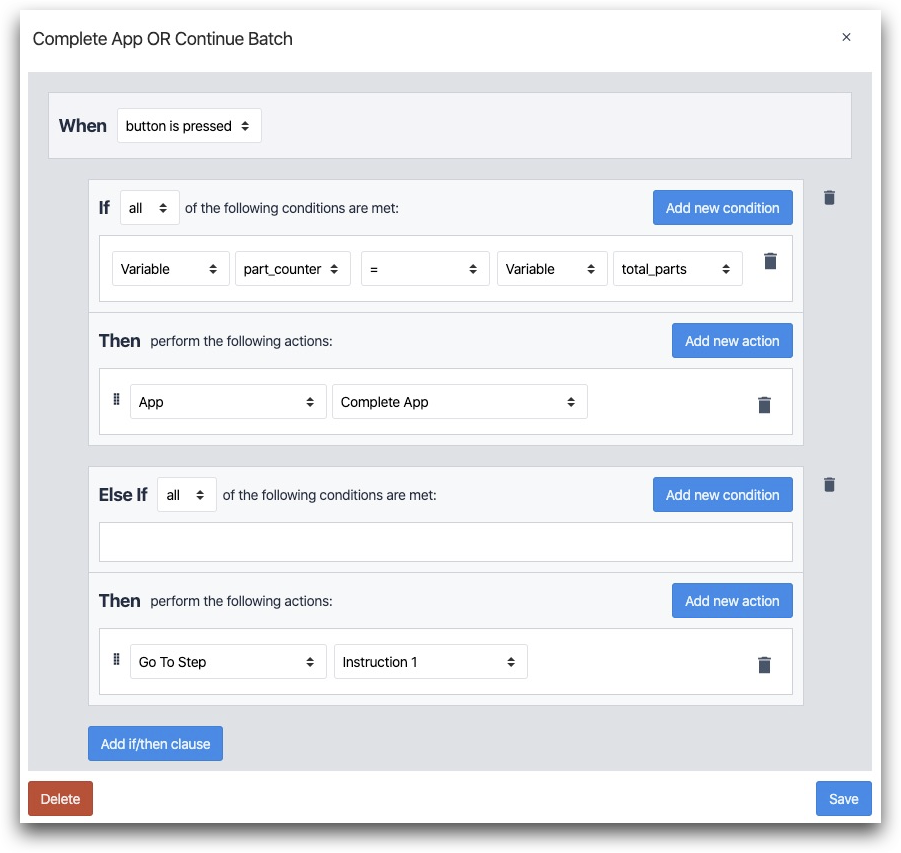 Tracking Batch Progress in a Table

The Tables feature allows you to track data about each batch and share that data between multiple apps.

So, if you want to access data about a batch from multiple workstations, you will need to store that data in a table.

Here's how to set up and update a simple table around batches of discrete parts.

To connect the table to our app, we need to create a record placeholder in the App Editor. Let's call it "Active Batch". 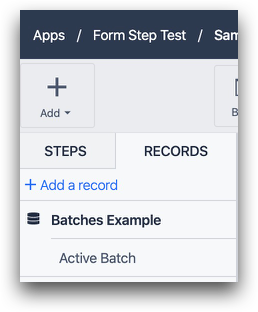 Now, we will update that table with the Form Step from the previous example:

We need to add a "custom action" that fires when the "Submit" button is pressed. Then, we can create (or load) a table record and update the first number field. 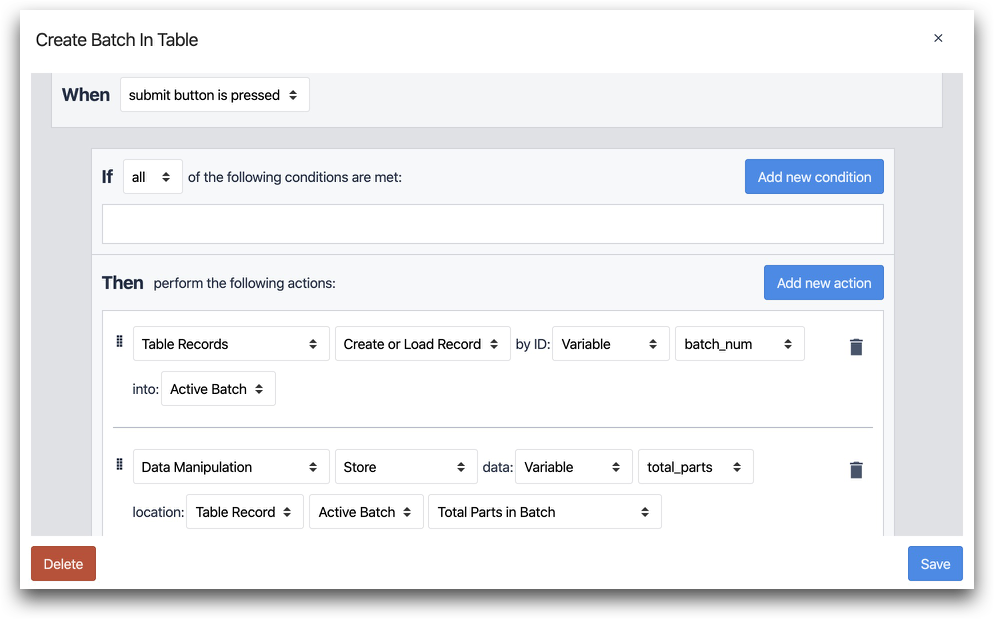 Finally, we can update this table record each time that a part is completed. We need to add another statement to the first trigger on the "Part Finished" button, as shown above.

Here's the updated trigger at the end of the app: 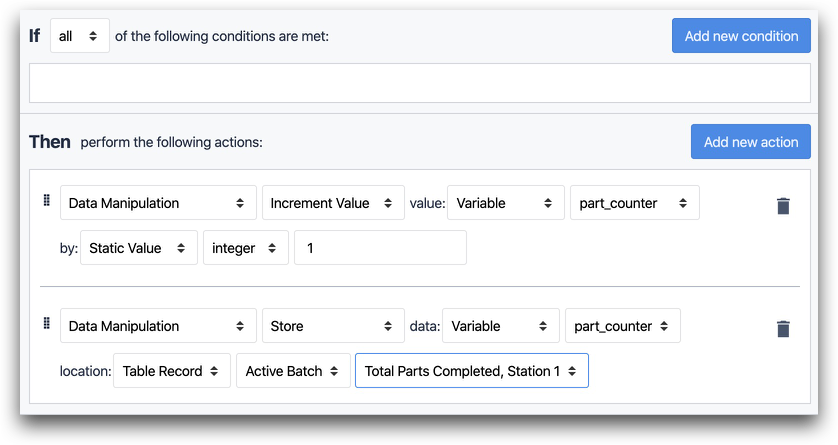