All Collections
Useful Tips, Tricks and Why to use Volunteer World
Volunteer Abroad Tips
Turtle seasons around the world

Turtle seasons around the world

Read this article to discover when and where to support sea turtle conservation.

Written by Linda Anderson
Updated over a week ago

Nowadays, almost all sea turtle species are endangered due to poaching, over-fishing, pollution, climate change, and habitat loss. As a result, conservation efforts have become vital for the survival of these creatures.

If you want to help save sea turtles, you need to know when to volunteer. Further below you will find information about the turtle seasons inland of:

Other places where organizations are working to protect key sea turtle habitats include the following destinations:

Nesting season - Seeing a sea turtle nesting can be a life-changing experience. Female sea turtles usually crawl to the beach at night and lay their eggs in self-dug holes. Depending on the species, the location, and the temperature, nesting season varies.

As a volunteer during the nesting season, you will patrol the beaches at night, see female turtles lay their eggs and relocate them until the babies hatch.

Hatching season - Witnessing a baby sea turtle hatch is as astonishing. In nature, they nest in groups and then move towards the sea in unison to increase their chances of survival. Similar to the nesting season, hatching periods also depend on the species and their location.

Hatching oftentimes takes place in hatcheries which are safe areas for the baby turtles. Volunteers will protect the baby turtles until they are released back to the sea.

The table below is a rough guide about the nesting and hatching seasons worldwide: 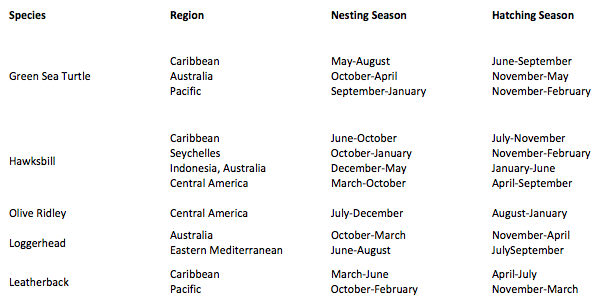 Nesting and hatching seasons hugely depends on weather conditions and vary from beach to beach even within one country. This is why Volunteer World recommends interested volunteers to research precisely about when and where to volunteer with sea turtles.

The following picture presents the turtle seasons around the island of Costa Rica: 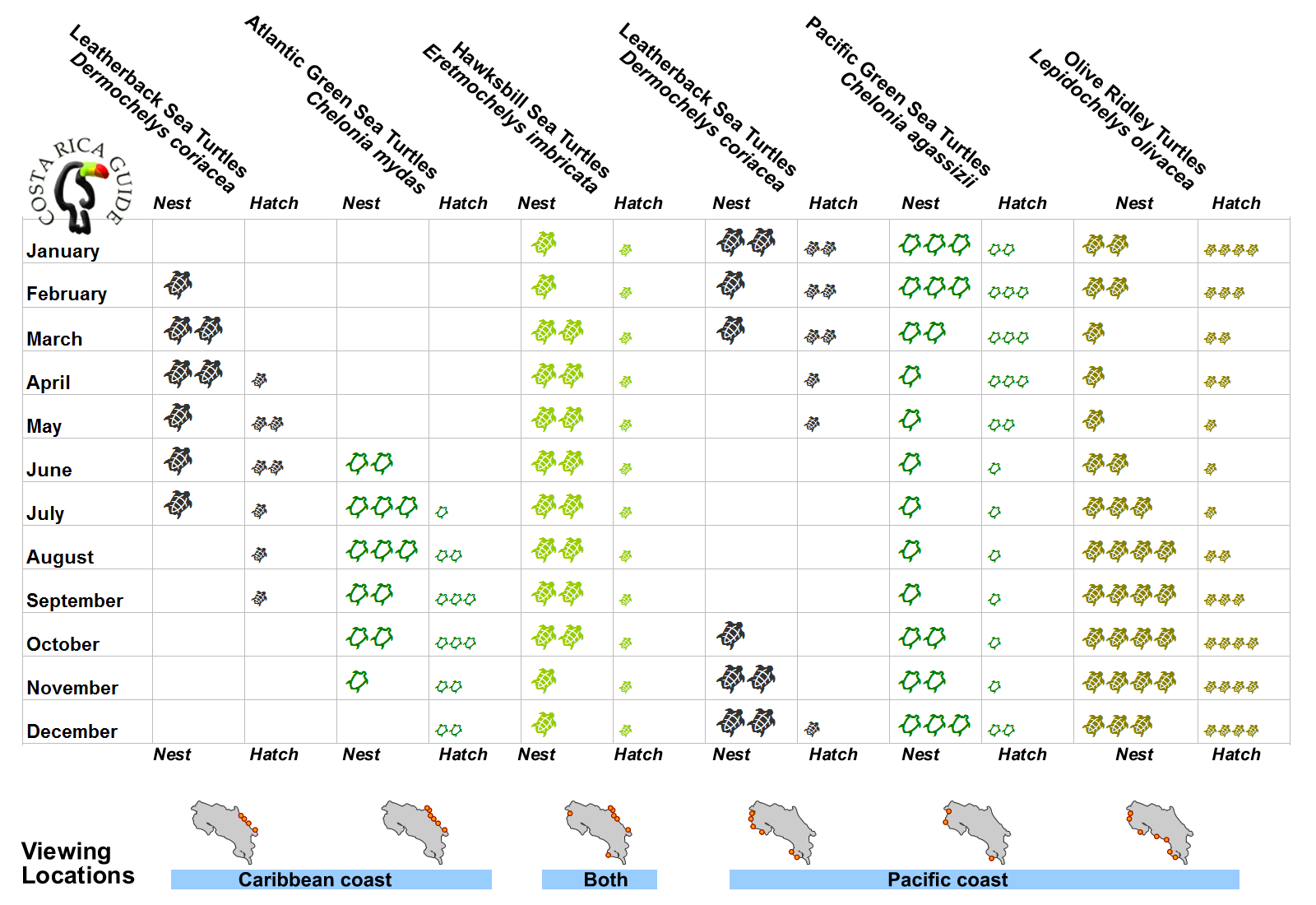 As you can see, six of the world's seven species of sea turtles are habitant in the coasts of Costa Rica.

On Volunteer World you can find volunteering opportunities during all four seasons. At almost any time of the year, your help is needed in at least one part of the island. In spring, summer and fall we recommend to join the east coast while during winter it is best to enjoy the good work on the south, south-west and west coast!

Experience ´la Pura Vida´ and help to conserve almost every sea turtle species in the world! If you want to have a lasting impact on the worldwide sea turtle population while volunteering on beautiful beaches then go ahead and apply for programs in Costa Rica!

Every year, the Mediterranean country attracts thousands of sea turtles to its shores.

These are the green turtle, the leatherback turtle and the hawksbill sea turtle. The loggerhead sea turtle is the most important sea turtle species of Greece, which is strictly protected by the Greek laws.

In Greece, the sea turtle season lasts only about 7 months, and most programs require assistance only during this time. Depending on the program, you can volunteer to protect sea turtles in Greece from April to October each year.

Sea turtle conservation in Greece offers you the opportunity to help conserve the most important nesting beaches for loggerhead sea turtles in Europe.

Sri Lankan waters are home to five of the seven species of marine turtles: the green turtle, olive ridley, hawksbill, loggerhead and leatherback. It’s the first two, however, that account for nearly the entire population of nesting turtles in Sri Lanka: 68 percent are green turtles and 30 percent olive ridley turtles, according to the National Aquatic Resources Research and Development Agency (NARA).

While the peak nesting frequency for green turtles in this region runs from February to April, the period between November and March is prime time for olive ridleys, which flock in the hundreds of thousands to beaches around the Bay of Bengal, including parts of Sri Lanka, to nest.

Turtle nesting sites abound all around Sri Lanka, with the major nesting beaches on the western, southwestern and southern coasts. There’s a rapid decline of turtles all over the island, especially the leatherback, hawksbill and loggerhead varieties.

As a sea turtle conservation volunteer in Sri Lanka, your main purpose is to protect baby turtles, their nests and to provide for their overall well-being in the hatcheries. Patrol the beaches, protect nests, care for baby turtles in Sri Lanka and release healed turtles into the Indian ocean!

Many turtle programs still run all year round because there is always important conservation work to do: Raising awareness in the local communities, research & data collection or beach clean-ups. You can find more information about possible activities here.

Have a look at our sea turtle programs now!