Written by Nicolas
Updated over a week ago

Watches don’t keep good time by accident. Much care is put into ensuring the precision stays consistent. A mechanical watch movement is a tiny-but-complex system made up of delicate components in equilibrium, operating flawlessly.

Daily Rate can be influenced by external factors, including shock (during transport or at home), temperature, magnetism, the state of inner lubricants and more commonly, the position of the watch, whether on the wrist or off.

The position of a watch significantly affects its accuracy; specifically, it is the consequence of gravity’s effect on the balance wheel – pulling it downwards regardless of the position of the watch. Because of gravity, a watch typically presents different deviations in different positions. That is, the deviation if you leave the watch dial up, or leaning on the side crown up, might be different.

This is why the Daily Rate is precisely measured based on 4 positions:

The resulting metrics provide expected deviations per day. For example, an accuracy test may yield something like this:

The first row means that if you leave that particular watch flat, with the dial facing up, it is going to gain around 7.2 seconds in the first 24h. Whereas if you leave it leaning on its 9H (Crown Up) for a day, it is going to gain around 8 seconds. The X metric at the bottom is the estimated average behavior ie the Daily Rate, calculated following some built-in heuristics.

Might you obtain readings outside these specs (specially if your watch is running fast) there’s a big probability that your watch has been magnetized, you can read more about it in this article:

Measurements are made between 10 minutes and 60 minutes of being fully wound (at full power) to avoid the effects of isochronism, as otherwise one would obtain wrong measurements. Therefore it’s important to fully wind up the watch via its crown, unscrewing the crown then winding the crown clockwise 40 full 360-degree turns in its pushed-in position. 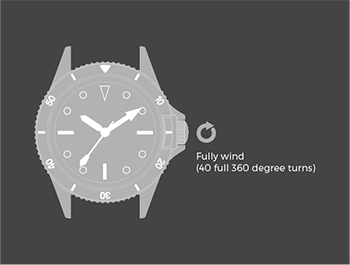 Always make sure that when measuring your watch’s accuracy there are no other interfering devices around potentially causing magnetism, the likes of smartphones, computers, speakers, etc.

Ideally, one should use professional instruments for measuring the rate accuracy correctly, the likes of Witschi Chronoscopes which allow precise measurement of test sequences in the four regulatory test positions.

Please note that the popular methodology of self-measuring the accuracy of a watch using smartphone applications is not 100% accurate since it’s a manual procedure that does not rely on sound signals generated by the mechanical movement of the watch.

As such, testing a watch over 24 hours, with some of that time being worn, in various positions, and unknown power reserve, and some being stationary, with the watch steadily losing power, is not likely to result in numbers identical to what one would get on a professional timegrapher, at full power, and measured it in 4 positions, getting an instant reading for the daily rate in each position.