About Required At levels for Required Documents

Choose the levels you need your documents sent in Enrollsy

Written by Serena Edwards
Updated over a week ago

When you create a Required or E-signature Document, you have to decide whether the Document is required at the Primary Account Holder, Enrollee, or Enrollment level. It’s important to note that the rules below apply per Enrollment Period. Here are those choices in more detail:

This means that the Document will only be required once per Primary Account Holder, regardless of how many Enrollees or Enrollments they have in an Enrollment Period.

Example: Jane Doe has two kids, John & Jill. John is enrolled in PreK and After School. Jill is enrolled in Toddlers. The Parent Handbook must be signed by Jane Smith once (per Enrollment Period).

An example of a Document is a Parent Handbook (that is required to be signed). The Document will show up on the Enrollees page > Documents Tab under Accounts: 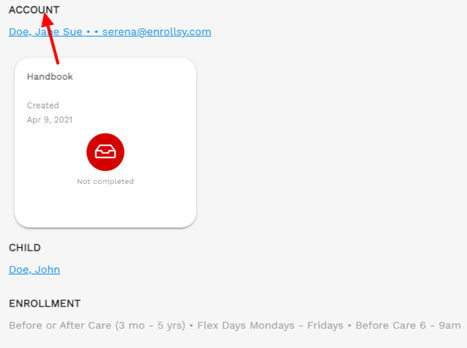 The Document will only be required once per Enrollee, regardless of how many Enrollments they have in an Enrollment Period.

Example: This also means that if John Doe has multiple kids, he will need to fill out the Immunization Form for both (whereas at the Account level, he would need to complete one, which wouldn’t make much sense).

For example, an Immunization Form is added per Enrollee, which appears on the Enrollees page > Documents Tab under Enrollee (or Child in the example below). 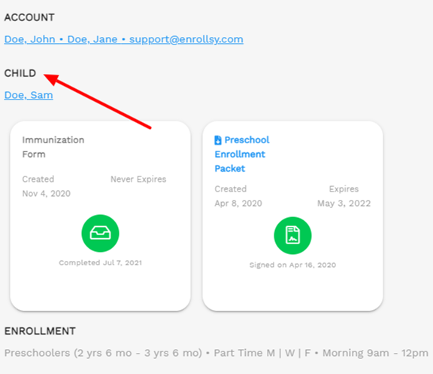 The Document will be required each time an Enrollment happens into any Program that requires it, even if they have already signed that Document.

For example, If a Parent Handbook is required per enrollment, each Program that requires it will be added regardless of whether it has been added to that Enrollee. The Document shows up on the Enrollees page > Documents Tab under Enrollment. 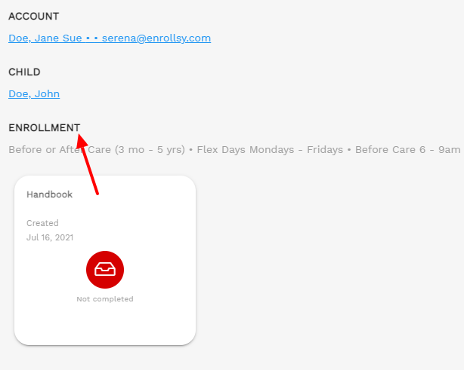