All Collections
Vote No on Proposition 1

Vote No on Proposition 1

Election Day is before us, voting has begun, and you may have questions about Proposition 1 on your ballot.

We want to tell you exactly how the passage of Proposition 1 will allow the most radical form of abortion, late-term abortion, in California. It will allow for the killing of a pre-born baby moments before his or her birth, for any reason during all 40 weeks of pregnancy. Your children, and every generation after, will reap the destruction of this cruel and extreme law.

If you’re trusting the proponents (the YES on Prop. 1 side) to explain the proposition and the affect it would have upon the people of California, you’d be mistaken. They’re playing word games and we want to expose the deception behind the three sentences that make up Prop. 1. Please hear us out.

Chino Hills, CA—August 23, 2022—Real Impact and Rasmussen Reports today released the results from a survey of likely California voters. Results were from more than 1,000 respondents during August 10-11, 2022.

“Gavin Newsom’s radical liberal government is trying to sneak past the people of California a constitutional amendment that would pave the way for abortion without limitations,” said Pastor Jack Hibbs of Calvary Chapel Chino Hills. “Proposition 1 on the 2022 ballot—which places no limits on abortion—is way too extreme even in a state where the majority say they are pro-choice. I believe abortion should never be enshrined in our constitution and allowing late-term abortion is especially evil.”


KEY INSIGHT: 79 percent of California likely voters say abortion should be limited to within the first six months of pregnancy:

KEY INSIGHT: 73 percent of California Likely Voters believe abortion should be legal only under certain circumstances after a fetus could survive outside the mother:

KEY INSIGHT: 69 percent of California Likely Voters believe abortion should be legal only under certain circumstances once a fetus develops a nervous system and can feel pain:

KEY INSIGHT: 63 percent of California likely voters say a fetus has the right to life from the moment of conception to 6 months:

KEY INSIGHT: 58 percent of CA likely voters believe that abortion should be legal only under certain circumstances after the heartbeat develops:

KEY INSIGHT: 70 percent of the poll respondents consider themselves Democrat or Other

You can view the entire poll here: https://www.rasmussenreports.com/public_content/politics/partner_surveys/most_california_voters_support_limits_on_abortion

PROPOSITION 1 - An amendment to the CA Constitution to include abortion up to the moment before a baby is born.

Proposition 1 is TOO EXTREME - even for California. It will be on the November 2022 ballot and, if passed by the voters, it will amend the CA Constitution to guarantee that a fully developed baby in the womb, moments away from birth, can legally be aborted. Passage of Proposition 1 will guarantee abortion without limits in California. It's inhumane, It's cruel. It should be illegal.

The thought of terminating the life of a viable baby who is ready to take his or her first breath is abhorrent to most Californians. We must speak up. We must inform others so they can speak up. Every voter must know the truth about this proposition.

Powerful people are actively campaigning to pass Prop 1 and guarantee that this "right" to unlimited, late-term abortion is enshrined in the CA Constitution. However, TOGETHER, we can organize and spread the truth about Proposition 1. We MUST defeat it in November in order to prevent this detestable practice from being guaranteed in CA for many years to come. 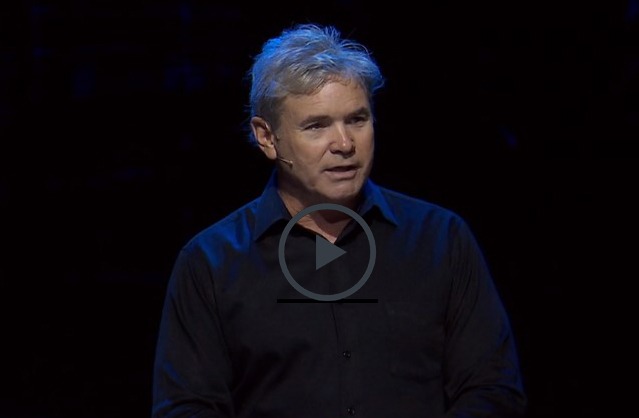 Watch "Happening Now": No On Prop 1
Learn More About Proposition 1
Get Involved & Volunteer 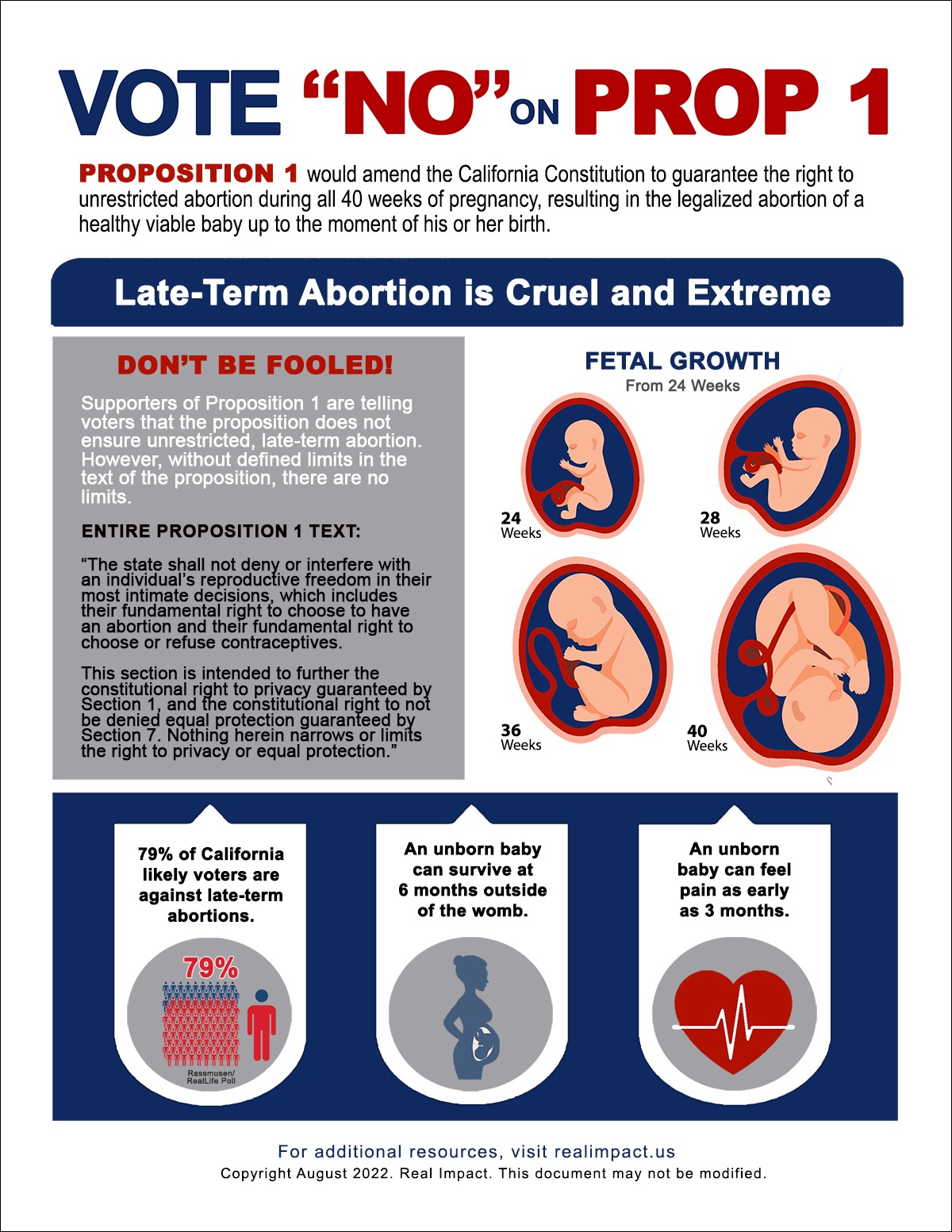 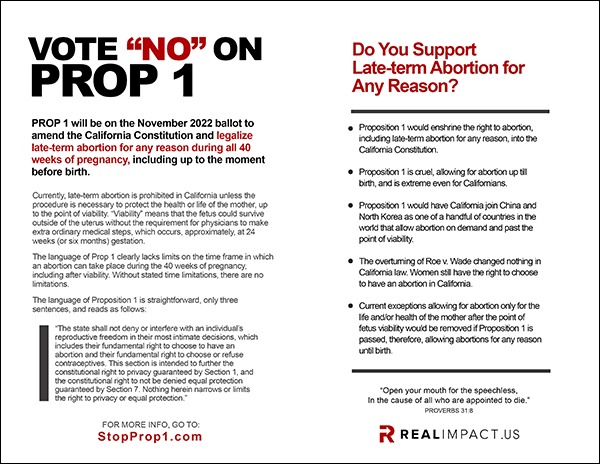 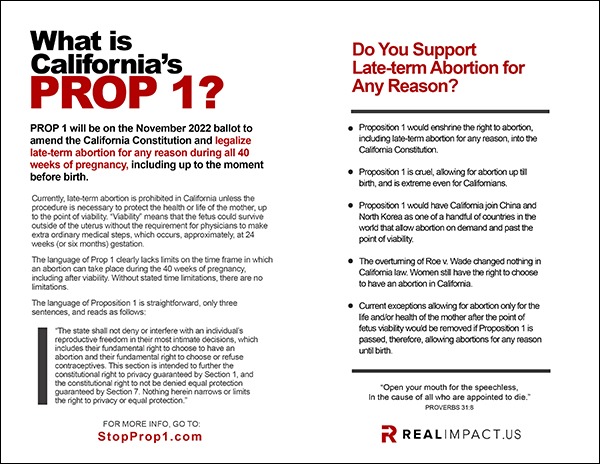 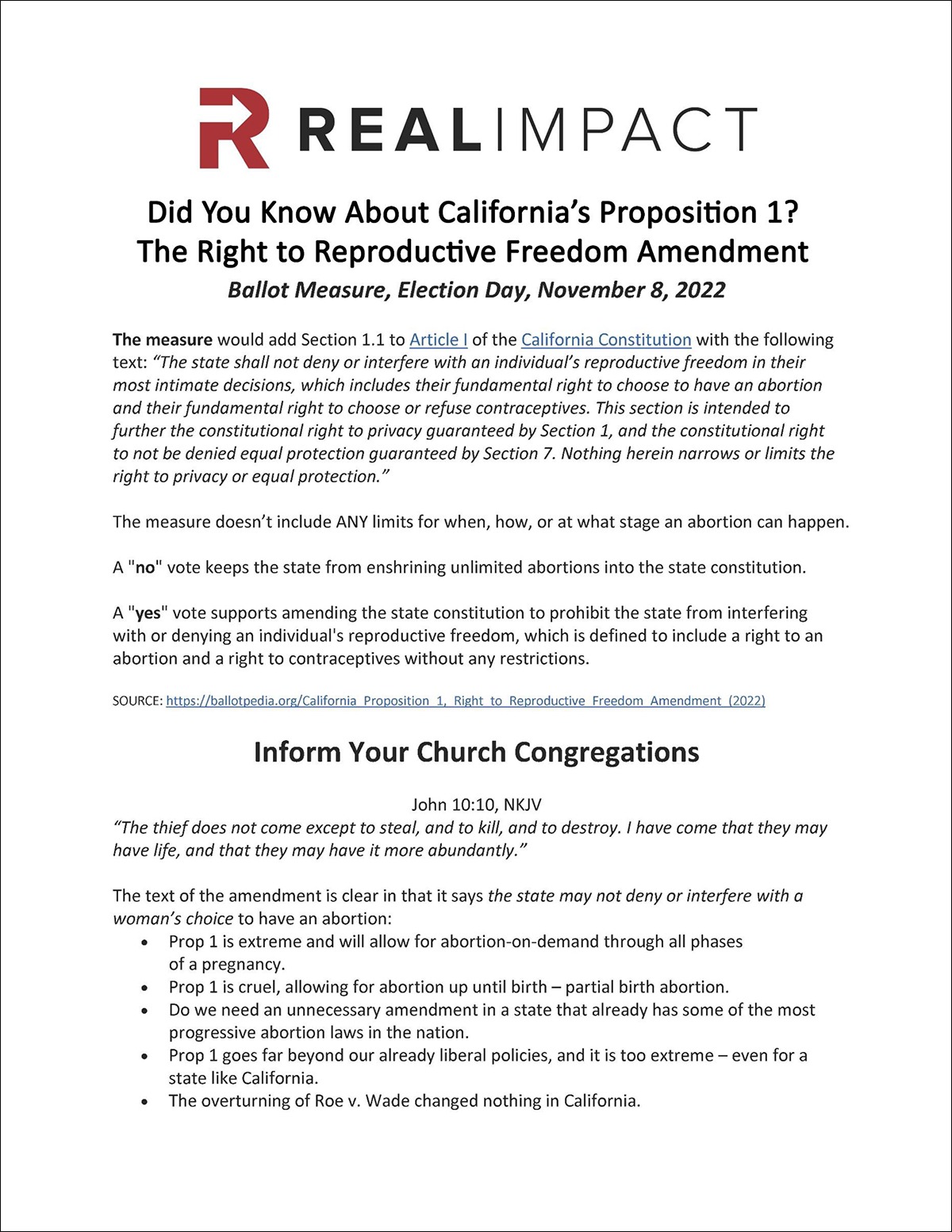 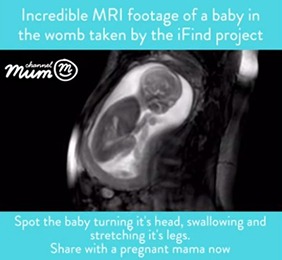