How to confirm and export images in Caption Pro.

Written by Chris Emmerson
Updated over a week ago

Confirming images is an important step in the Caption Pro workflow.

The reason point two is so important is because if you have the correct name for someone selected, but you then add their twin for instance, it might automatically change person A's name to their twin's (if the software thinks they look more like them than their own reference images).

This will only happen for unconfirmed images, so to prevent this, be sure to confirm images as you go.

In order to make sure you have the correct names for the people in your image we have included a number of different functions.

When you first use the software, and you don't yet have anyone in your personal database there will be no reference images available for you to compare the selected face to the suggested name.

Any recommendations from the Caption Pro database will look like this: 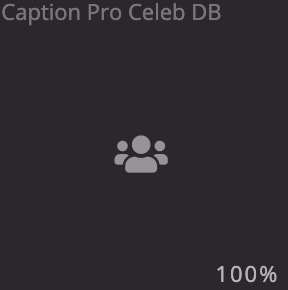 This score should not be relied upon by the user and it is recommended that users make use of other tools to correctly identify who is in the image.

If you want to check that the suggested person is in fact the person you have selected, you can press the hotkey 's' or click 'search the web' to bring up a google image search for the suggested celebrity:

Moving images to the Confirmed tab

The comparison between the selected face and the suggested name will become easier to make when you have confirmed images of people.

When you are satisfied that the names of the people in your image are displaying correctly in the name bar (the list of names underneath the selected image) you can then 'confirm' them. This is done by either right clicking on the image(s) and pressing 'confirm' or clicking the keyboard shortcut 's' with the image(s) selected. Confirming an image will move it to the 'confirmed' tab in the thumbnail viewer, and they will appear in this section in the order in which they were confirmed, or by date-created for batch confirmations.

Every time you confirm any images with a named person in, the image of the named person's face gets added to their reference pool as you can see in the example below:

If you'd like to find out more about person and database management please read our guide on Editing People.

Confirmed images can be moved back to the unconfirmed section by pressing the keyboard shortcut 'u' for the selected image(s) or by right clicking a selected image and pressing "Unconfirm".

It is worth noting that confirmed images will be affected by deleting a person form your (or the global) database, so be sure to export any affected images before deleting any relevant names from your database if necessary.

The confirming stage is intended to help organise your images as well as a precaution for the above conflict, this stage can be skipped however if you want to export or apply your metadata straight from the unconfirmed section. This can be done by either pressing the keyboard shortcut 'e' (for exporting) with the necessary image(s) selected, or by right clicking the necessary image(s) and pressing "confirm and export" or "confirm and apply metadata" (hotkey: 'Shift+s') if you just want to paste the new metadata directly to the watched images.

In order to apply the changes to the metadata of the images you must either 'save' or 'export' the images from Caption Pro.

If you are expecting to continue working on the original images after using Caption Pro, or you are sending the images out through different software, then you might want to apply the metadata changes directly to your watched images. The benefit of this is that it is quicker, and doesn't create new files for you to have to work with.

Applying the metadata to your images is very simple, and can be done to all images in the confirmed tab by pressing the 'Save all' button at the bottom of the page. It can also be done by right clicking on any image(s) in your project and selecting 'save'.

If you save an image from the unconfirmed tab the images will still be treated as 'confirmed' in the sense that in any of the saved images, named individuals will have their faces added to the reference pool for that record (assuming there is space left in their allowance of reference images). So it is still important to make sure you have correctly named everyone (or changed the name to 'guest' for incorrectly named people) before saving, otherwise it could compromise the integrity of your facial recognition database.

Once the metadata has been applied successfully, your images will be moved to the 'exported' tab, where additional actions can be performed on them if necessary.

Note: Caption Pro will apply the metadata as you see it in the image specific metadata section. If a field is displaying there but is empty, then that field will be blank in the image after export, overwriting any changes you might have made in other software in the meantime. To save this from causing problems, either edit all necessary metadata in Caption Pro, or disable any fields you won't be editing in Caption Pro (by 'un-checking' them in the Edit Project Metadata section) so that the save/export ignores those fields entirely.

If instead, you would like to create a copy of the images with the new metadata applied in a new location, or you wish to send the files out via FTP then you will want to 'Export' your images.

You can do this with images in the unconfirmed tab by either pressing the keyboard shortcut 'e' with the necessary image(s) selected, or by right clicking the necessary image(s) and pressing "confirm and export". If you export from the unconfirmed tab the images will still be treated as 'confirmed' in the sense that in any of the exported images, named individuals will have their faces added to the reference pool for that record assuming there is space left in their allowance of reference images. So it is still important to make sure you have correctly named everyone (or changed the name to guest for incorrectly named people) before exporting, otherwise it could compromise the integrity of your facial recognition database.

In the export popup window you will be able to send the files to multiple disk destinations as well as multiple FTP destinations simultaneously.

By default your images will export with their current version name, but before you export your images you may want to rename them. You can do this in the 'filename' dialogue box and you are able to use any of the formulas within this dialogue box.

If you want all of your images to be renamed as the name of the people in each image for instance, you will want to insert the 'People' formula here. In this case, (or if you were to rename them all to reflect the name of the job for instance) to prevent conflicting filenames, you will also want to include a 'sequence' formula, numbering your images based on the order in which they have been exported.

By default if you are exporting files with the same name and have not included a sequence number, a number (contained within brackets) will be added after the duplicated file name in the location your are exporting them to, unless another 'name clash strategy' has been specified.

When exporting to a Disk destination first make sure you have the appropriate default 'Name Clash Strategy' selected in the dropdown box and then chose your destination by clicking "select folder" and browse to your desired export location. This can be done multiple times to export to multiple disk destinations.

If you try to export directly to the watch folder, the images will be automatically exported to a sub-folder, stopping them from accidentally being reprocessed.

The name clash strategy determines what happens to the files should there already be files of the same name in the export destination:

Skip
Skip will cancel the export of an image if there is already an image of the same name in the selected location.

Overwrite
If there is already an image with the same name as a currently exporting image in the export destination, 'overwrite' will replace that file with the image that is currently being exported.

Rename
Rename will change the name of the exporting image if there are images with the same name in the export destination (a sequence number e.g. (1) will be added to the end of the file name and both files will remain in the destination).

Once you have all of your desired disk and FTP destinations set up you can start the export process by clicking "Export" at the bottom of the window.

During the export process there are indicators of the progress on the thumbnail of the image. You can also see an 'Image Export Report' which shows the progress of that image's export to it's various destinations by clicking on the "Exporting" tag at the top of the image viewer:

You can also see a full report of all the images currently exporting by clicking on the progress bar at the top of the page:

You will be able to retry failed exports in both progress windows.

Once an image has been exported to all of its destinations it will be moved to the "Exported" tab and you will receive a desktop notification as well.

Something not quite right?

If are stuck with anything or want to get in touch, read our support article for more info.