All Collections
FLOW - real-time monitoring
Introduction
The architecture of FLOW

The architecture of FLOW

See what makes FLOW such a powerful and scalable platform.

The previous article introduced FLOW’s native client application FLOW Insights and the possibilities of the whole FLOW environment. Now it’s time to look under its hood and establish some key terms.

The world of FLOW is based on trajectories. The precise telemetry data about each road user is an essential building block for actionable traffic intelligence enabling interactive analysis and immediate actions. A trajectory fully describes the motion of a traffic object, i.e. where the object was at each point in time, and its metadata like color or license plate number. Such representation of traffic allows you to play with the data, interact with it to understand each traffic situation, explore it at any time and place to discover new traffic patterns, deeply analyze traffic interactions to predict future trends, or visualize and share it in any form you need. But where do trajectories come from? FLOW nodes. 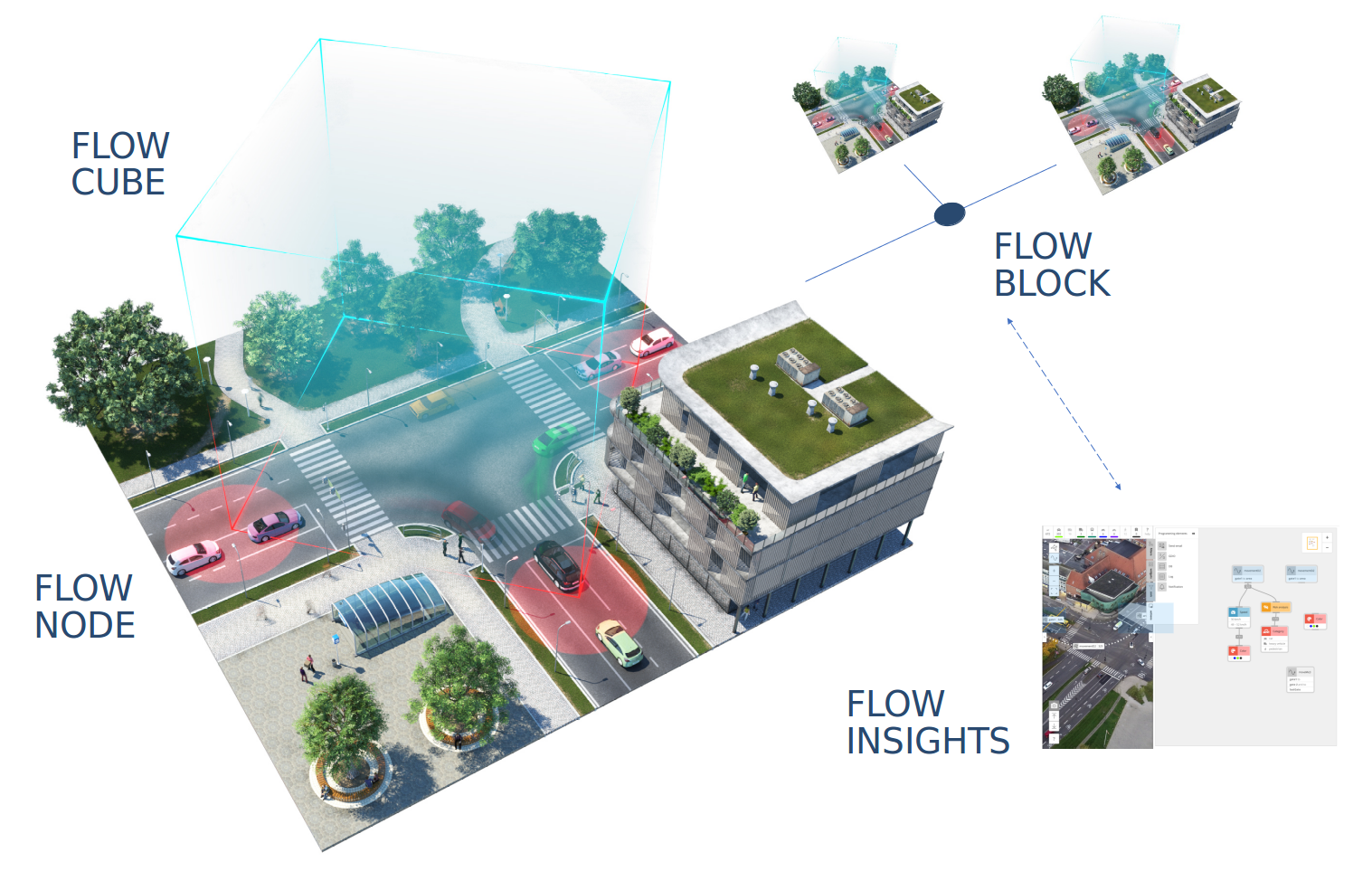 FLOW nodes create trajectories through various means like tracking traffic objects in a video feed, recording, from GPS transmitters, etc. Each node manages one source of data from which trajectories can be built. Once trajectory data is retrieved, it’s further sent and merged in FLOW cubes.

A FLOW cube receives trajectories from one or multiple FLOW nodes and merges those that belong to the same traffic object. If, for example, several cameras watch different parts of an intersection and a vehicle passes across, it may show up in different camera feeds at various times, which results in multiple trajectories being generated and sent to a FLOW cube (one for each camera feed in which the vehicle has been detected). The FLOW cube then recognizes that these trajectories belong to the same vehicle and merges them into one. From now on the trajectory isn’t constrained to the space of one video feed, but is anchored in real-world coordinates. A FLOW cube typically works with all FLOW nodes from the same traffic intersection and sends merged trajectories to a FLOW block.

A FLOW block is a universal traffic brain that receives merged trajectories from one or multiple FLOW cubes but doesn’t merge them further. Instead, it evaluates and interprets trajectories in the way that you design through analytics. This is where hundreds of thousands of trajectories are converted to smart data, where they get meaning.

FLOW Insights, our client application, is tailored to utilize the full potential of this arrangement and help you effectively manage each layer. It’s also the perfect application for designing analytics for any traffic analysis task you want, be it traffic monitoring, smart parking, people counting, adaptive traffic lights, incident detection, perimeter protection, and much more. The results of all of these tasks can be visualized or processed in third party applications through sinks and widgets.

FLOW has been created with flexibility in mind and so that any of its layers can be run on a wide range of devices and platforms. One device could also host multiple FLOW layers. Here’s a few examples of our proprietary turn-key solutions:

TrafficCamera runs a node, cube and block at the same time, meaning it captures a scene, extracts trajectories from the image, and processes these trajectories based on analytics created through FLOW Insights—all in one device. (The cube here only serves as an intermediary between the node and the block.)

TrafficXRoads is an embedded device installed inside the traffic controller box that can run up to 6 camera streams (6 nodes) at once, receiving video from local IP cameras. The device can have up to 8 POE ports if required. The trajectory extraction from the image happens on the edge and then the data is sent further to a cube.

TrafficEmbedded is a powerful embedded device that can run up to six nodes at once—typically receiving video feeds from up to six cameras, extracting trajectories from the images, and sending them further to a cube.

TrafficEnterprise is a server or cloud solution providing support for multiple blocks. It’s highly scalable, enabling tens or even hundreds of video streams (nodes) to be processed simultaneously—an ideal solution for the conversion of existing camera networks into a grid of cooperative smart sensors.

You can see the full range of FLOW devices in the next article.

We will be happy to answer any questions you may have. Contact us!